View bio
Some species of lion have become endangered, and their populations are getting smaller. In this lesson, learn why lion numbers are decreasing, including the destruction of their habitats, loss of food sources, and lack of protection. Updated: 11/27/2019
Create an account

Lions have many nicknames, like 'King of the Jungle' and 'Top of the Food Chain', because they're very powerful animals that can survive in different environments. Unfortunately, there are several different species, or types, of lions that are considered endangered. This means that the numbers of these lions are decreasing, and they could possibly become extinct, or no longer exist. There are several reasons why these lions are endangered. Let's find out why their populations are getting smaller. 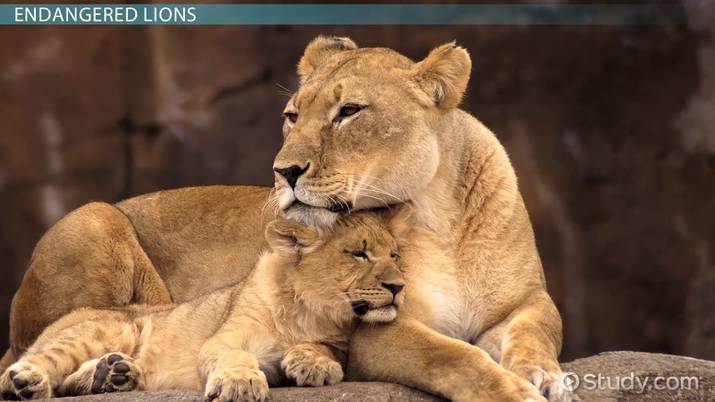 Coming up next: Why are Asian Elephants Endangered? - Lesson for Kids

One of the main reasons why lions are disappearing is that their homes are being destroyed. Many endangered lions live in grassland and forest areas of Africa and India. As the human population increases, these lion habitats are destroyed in order to create more homes and buildings for people. Without an area to call home, endangered lions often die off.

While a buffalo or zebra might not sound like a tasty snack for you, lions would think it delicious! They often hunt for prey, or animals they can kill for food, around their habitats. If human development is causing a decrease in the lion population, can you guess what's also happening to their prey? Because there are fewer animals available, lions have to search harder for food to survive.

Not only do lions have to search for new homes and prey, but they also have to avoid hunters as well. Some people hunt and kill lions as a sport or for recreation. Farmers might hunt lions because they pose a danger to their farm animals. Still other hunters try to kill lions for their fur.

What happens when you get sick? You go to the doctor and get some medicine. Unfortunately, lions living in the wild, rather than in zoos, can't go to the doctor when they get sick. There are diseases that they can catch from other animals, and some of these diseases are deadly.

People called conservationists want to conserve, or save, the lion population. They work to create areas that are protected for lions, where they cannot be harmed by hunters and where human development is not allowed. While these protected areas are a step in the right direction to help endangered lions, sometimes the rules are not really enforced very well. More work needs to be done to make sure these jungle kings can be around for a long time.

Several different types of lions are in danger of becoming extinct for a variety of reasons. Many of the habitats where lions live are being destroyed due to increases in human population, and much of the prey that they depend on for food is disappearing. Sometimes lions are hunted or catch diseases, but people called conservationists want to help increase the lion population.

A Poster Campaign for Lions

In this activity, students are going to apply their knowledge to spread the word about the endangerment of lions. To do this, students will create a poster campaign that they can share with the world to inform them about the dangers lions face. Poster campaigns are one of the most common ways to advertise an idea or message, and there are many famous ones that you can show students as examples, such as the Hope campaign for Barack Obama or the Got Milk campaign for milk.

Lions are an endangered species and it's important to raise awareness about their problems so that we as humans can help them. That's exactly what you'll be doing in this activity as you create a poster campaign to inform people of the dangers lions face. You can create one or more posters that all have a similar appearance and inform people about the dangers lions face. Your posters should include all the reasons lions are endangered as well as at least three things we can do to help them. To make sure your poster has all the correct information, look over the checklist below.

Why are Lions Endangered? - Lesson for Kids
Related Study Materials

The Food Chain of a Lion

Why Are Cheetahs Endangered? - Lesson for Kids

Why are Tigers Endangered? - Lesson for Kids

What do Lions Eat? - Lesson for Kids

Why Are Pandas Endangered? - Lesson for Kids

Why Are Jaguars Endangered? - Lesson for Kids

Why is the Amur Leopard Endangered? - Predators & Statistics

Why is the Grey Wolf Endangered? - Lesson for Kids

Why are Polar Bears Endangered? - Lesson for Kids

What Do Kangaroos Eat? - Lesson for Kids

Why Are Blue Whales Endangered? - Lesson for Kids

What do Tigers Eat? - Lesson for Kids

What Do Zebras Eat? - Lesson for Kids