Lesson Transcript
Instructor: Charles Kinney, Jr.
Most of us know how to use email, but what happens when email etiquette goes wrong? In this video, we'll explore some real-life cases of poor email etiquette, and learn why it is important to follow the rules of good communication.
Create an account 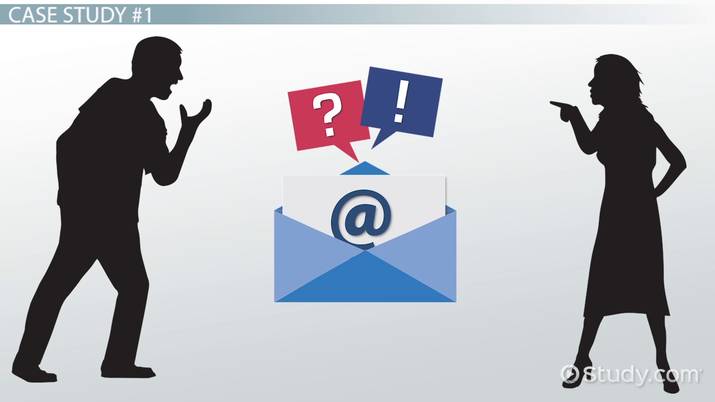 Coming up next: What is the Effect of Onomatopoeia?

When arguing by email with a colleague, an employee secretly carbon copies (CCs) the boss in a reply without the colleague's knowledge.

What happened after the email? The employee looked like a tattletale and ultimately left the company. Emails may seem like an instant method of communication, like talking and texting. However, like letters, emails are a written form of communication. When writing a hard copy of a letter to a colleague, most of us would not have waited for a reply and then photocopied all of the letters to send to the boss. Email etiquette demands the same rules as letter writing etiquette, in terms of content, grammar, tone, and proper form.

When confronted with a mass of emails, an employee sends out an auto-response saying, 'Thank you for your email. As I get so many, I will respond as soon as I can.'

What happened after the email? The employee's co-workers stopped emailing her and left her out of the loop. The auto-response came across as arrogant, as nearly everyone gets emails. It would be considered rude to use a telephone greeting saying, 'Thanks for your phone call. As I get lots of phone calls, I'll get back to you as soon as I can.' The same rules apply to email etiquette. That's why you should reply to email in a timely and appropriate matter, just like you use a friendly telephone greeting and return telephone messages quickly to show respect for your colleagues and friends.

A secretary resigns, after which a colleague sends out an email to other employees asking for a better-looking replacement. The resigning secretary accidentally sees the email.

What happened after the email? The resigning secretary sued, and the case was settled out of court. Almost certainly, a person would not say such a thing when speaking to a coworker, so it shouldn't be said in email either. Email is forever, and when writing a professional email, you're not only representing yourself, but also your company. The next time you're composing a work-related email, ask yourself, 'Would I say this in real life if my boss was standing in front me?' If the answer is no, don't send it. Email etiquette involves the same good manners as face-to-face communication.

Fortunately, the same rules that apply when making a mistake in written letters, telephone calls, or face-to-face communication also apply to email: take responsibility and apologize. If it's something non-catastrophic, like a spelling error, remember that we're all human and make mistakes. Don't pretend it didn't happen, but don't bring attention to it by sending a second email saying 'I spelled something wrong.' If you've made a much bigger mistake, apologize and attempt to correct it. The rules for email etiquette are the same as those for all forms of social behavior and communication. If you make a mistake, take responsibility and try to fix the error, which is usually much better than trying to sweep it under the rug.

Email etiquette involves respect and common sense as well as maturity and professionalism. Common etiquette rules focus on good communication, whether you're speaking face-to-face, talking on the phone, or writing a letter. When practicing email etiquette, keep the content appropriate and respond on time. If you make a mistake, apologize and take responsibility for your communications.

What is Email Etiquette? - Definition & Examples

How to Handle Challenges in Customer Service

Business Etiquette In the Workplace and Beyond

The Basic Structure of an Email

How to Use the SUMIF Function in Excel

Body Language in the Workplace

Group vs. Individual Decision Making: When to Use Each

What are Interpersonal Skills? - Definition & Examples

What is a Customer? - Definition & Overview

Professionalism in the Workplace: Definition & Maintenance