Mary Beth has taught 1st, 4th and 5th grade and has a specialist degree in Educational Leadership. She is currently an assistant principal.

If you haven't learned about the Civil War in school already, you definitely will in the future. It is as important to understand why it happened. Come and learn about the causes in this lesson. Updated: 06/11/2020
Create an account

What Was the Civil War?

''War! What is it good for? Absolutely nothing!'' This is a line from a famous song by Edwin Starr, and its viewpoint is absolutely understandable. There is so much death and devastation that occurs during wartime that it can be difficult to understand why there is a war in the first place. 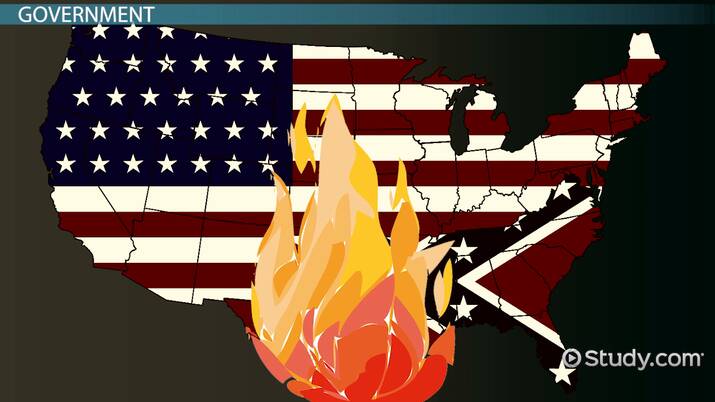 Coming up next: Union States during the Civil War Lesson for Kids

Politics often play a part in the tension that can lead to a war, and the Civil War was no exception. You see, these states were all pretty new; they were only established in 1776. Prior to that, 13 of them were colonies, while the rest had not been established at all. Therefore, they were still trying to figure out how they should work together.

Abraham Lincoln was a Republican, and it really upset the Southern states when he was elected president, especially because he won despite the fact that he did not get a single Southern electoral vote. This made the South feel like they had no control over what was going on with their country, and ultimately led to them wanting to secede, or separate, from the United States and be their own country.

There's another saying that goes, ''More money, more problems!'' Economic, or money, issues are commonly a cause of war. In the Civil War, one of the economic causes was the tariffs, which were a tax that was placed on goods that went to or came from other countries. The South felt that the government was doing this to give the South a disadvantage because they bought and sold more goods with other countries than the North.

And, in fact, the North was in a much better financial situation than the South. For one thing, there were simply more Northern states than Southern states (it was 23 to 10). Also, the North mostly manufactured products while the South focused on farming and agriculture, and manufacturing was much more profitable than farming. This difference only made the South more upset, feeling like the country was not rooting for them to be successful.

The most well-known reason for the Civil War is the issue of slavery, which was when white people owned African Americans and forced them to work for no pay. The United States prides itself on being a place that promotes life, liberty, happiness, and freedom, but there is nothing about being a slave that is happy or freeing. Under the leadership of President Lincoln the federal government wanted to end slavery, but the South did not feel the same way. They wanted to fight in the Civil War to preserve slavery.

The Civil War took place for many reasons, including politics, economics, and slavery, the practice of owning African Americans and forcing them to work without pay. The South was unhappy with lots of things in the new United States of America, including the tariff, or tax, that placed an especially big burden on them. As a result, the South fought to secede, or separate, from the country.

Why Was the Civil War Fought? - Lesson for Kids
Related Study Materials

The Role of Women in the Civil War

Adages and Proverbs: Lesson for Kids