In this lesson, we'll explore the various reasons why John Steinbeck's 'The Grapes of Wrath' (1939) was banned, challenged, and burned. We'll learn about the objections that parents, teachers, and businessmen raised against the novel.
Create an account

Profanity, Sex, and Communism, Oh My!

When it was first published in 1939, John Steinbeck's The Grapes of Wrath ruffled a lot of feathers. Conservatives read its collectivist message as a rejection of American individualism. They called Steinbeck a communist. Business owners and landowners railed against the novel's promotion of labor unionization, fearful of the effect it would have on the workers under their employ. Parents and teachers also derided the novel for its foul language, sexual content, and violence. For folks sensitive to the political, religious, and social implications of literature, there's a lot not to like about this novel. Let's look at some reasons John Steinbeck's The Grapes of Wrath was banned, challenged, and burned across the country. 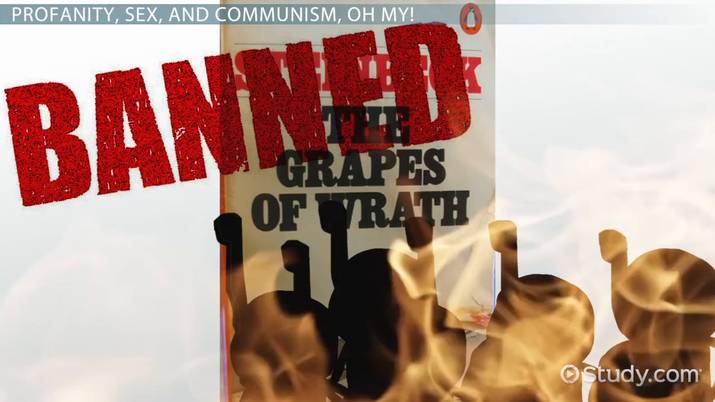 Coming up next: The Grapes of Wrath Movie vs. Book

The American Library Association (ALA) maintains a list of all the books that have ever been banned, or forcibly removed, from public library systems or school curricula. The ALA also keeps track of books that have been challenged, referring to the process in which community members, teachers, and parents raise formal objections to publicly available reading materials.

In some cases, books have also been burned for political, ideological, or religious reasons. Book burning is infrequent because of its association with extreme political regimes, principally Nazism, that restrict citizens' access to knowledge. American democracy upholds the right of every citizen to the freedom of expression and thought, as stated in the U.S. Bill of Rights. In any case, banning, challenging, and burning books is tantamount to censorship, the suppression of objectionable material. In fact, the criticism lodged against Steinbeck's The Grapes of Wrath was the main impetus that drove the ALA to implement their own Library Bill of Rights.

Specifically, objections raised against John Steinbeck's The Grapes of Wrath cross the spectrum from foul language and communist implications to religious themes and sexuality. Since its publication in 1939, the novel has been banned in Kern County, California; St Louis, Illinois; Buffalo, New York; Kansas City, Missouri; Kanawha, IA; and Anniston, Alabama. It has been challenged in more places than that both nationally and internationally. The case even went before Congress, where Oklahoma representative Lyle Boren of Oklahoma denounced the novel as ''a lie, a black, infernal creation of a twisted, distorted mind.''

Of all the places that The Grapes of Wrath caused disruption, it was Kern county, California, that felt the brunt of the pain. Local businessmen in particular felt attacked by Steinbeck's portrayal of working conditions in their county.

If you recall, the novel follows the Joad family's pilgrimage from Oklahoma to California in search of work. When they arrive in Kern County, California, they discover their situation not much improved. Migrants are forced into shanty towns; wages much lower than expected; poor working and living conditions. Well, residents and businessmen of Kern County took that to heart. They rejected Steinbeck's portrayal of the living and working situation in California as inaccurate and slanderous.

Upon the release of the novel in 1939, it was immediately banned by the county council. Politicians, businessmen, teachers, and parents all rejected Steinbeck's negative portrayal of California farmers. It was the local chapter of the Associated Farmers, a consortium of California businessmen and landowners, who championed the decision. Their leader, Bill Camp, even went so far as organizing a book burning. In what some called a 'symbolic act' and others called a 'photo-op', Camp and his colleague Clell Pruett set a copy of the book ablaze in a trash can.

In response, John Steinbeck wrote, ''The Associated Farmers have begun an hysterical personal attack on me both in the papers and a whispering campaign. I'm a Jew, a pervert, a drunk, a dope fiend.'' He concluded, rightly, that the bans and burnings resulted from ''people who admit they haven't read Grapes, indeed wouldn't dirty their minds with it.''

When it was first published in 1939, businessmen, farmers, teachers, and parents raised serious objections to John Steinbeck's The Grapes of Wrath. They protested the novel's foul language, religious themes, sexual overtones, and communist implications. Various school boards, library associations, and government councils across the country engaged in acts of censorship, either banning or challenging the book.

Steinbeck's choice to end the Joad's journey in Kern County, California, raised the feathers of local politicians and businessmen. The Associated Farmers of California, headed by Bill Camp, actually held a symbolic book burning. All in all, The Grapes of Wrath goes down in history as one of the most controversial and politically-minded books of the 20th century.

Why Was The Grapes of Wrath Banned? - Censorship & Controversy
Related Study Materials

John Steinbeck: Grapes of Wrath and Other Works

Breastfeeding in The Grapes of Wrath: Ending & Analysis

Biblical Allusions & References in The Grapes of Wrath

The Turtle from The Grapes of Wrath: Symbolism, Analysis & Quotes

Rose of Sharon in The Grapes of Wrath: Symbolism, Character Analysis & Description

The American Dream in The Grapes of Wrath: Theme & Analysis

Is Of Mice and Men a Banned Book?

Why Was Animal Farm Banned?

Why Is Fahrenheit 451 Banned?

Soup Kitchens During the Great Depression