Margaret is a writer and academic tutor with a passion for history. She holds bachelor's degrees in both history and biology as well as an M.A. in European history. She has worked with college students as a tutor and advisor for over a decade.

The Wiccan religion has many symbols and meanings that are ancient and nature-based. Meet the Horned God and Mood Goddess, become familiar with the seven symbols that Wiccans hold sacred, and learn the meaning behind these symbols. Updated: 01/20/2022
Create an account

Have you ever celebrated the change of seasons? Maybe you go strolling through the park in the spring, relaxing on the beach in the summer, apple picking in the fall, or skiing the slopes in the winter. While many people can appreciate the different activities to do in nature depending on the season, there's actually an entire religion based on nature and the cycle of the seasons, though it's not just about enjoying the flowers or the falling leaves. Wicca is a faith with Pagan roots that revolves around celebration of natural cycles and seasons.

Wicca worships both the Horned God as well as the Moon Goddess. There are celebrations for the cycles of the sun, which are associated with the Horned God, as well as for cycles of the moon, associated with the Moon Goddess. Wicca has been the object of criticism over the years for its perceived relationship to witchcraft, though Wicca considers itself a religion rooted in Paganism. 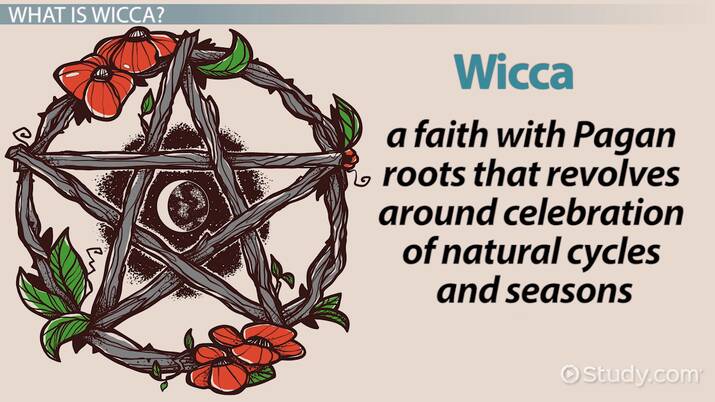 There are many symbols that are important to the Wicca faith. Let's now take a look at seven examples, one at a time.

The first symbol is the Triple Moon symbol. This symbol shares a strong relationship to Wicca through the Moon Goddess. However, this symbol also is thought to symbolize the life of a woman: maiden to mother to crone. The symbol encourages women to embrace their life's journey from youth to motherhood and adulthood and finally to old age. The symbol is that of a full moon, with a waxing crescent moon to the left and a waning crescent moon to the right.

The second symbol, the Horned God, represents this deity celebrated in the Wicca faith. The Horned God is accepted as the link between the spiritual and divine world and the human or natural world. The symbol also captures the three life stages of a man: master, father, and sage. This illustrates a man's journey from youth and boyhood to fatherhood and adulthood, and finally to the last stage of life where they would pass on their wisdom and knowledge to younger generations. This symbol looks like a full moon with an upward-facing crescent moon resting on the top, with the points like horns.

The third symbol is the Witch's Charm or the Witch's Knot. This symbol was originally considered a protection against dark magic or witchcraft. The interwoven circles provided no start or end point, which was believed to shield the wearer from all points. Practitioners have been known to draw it above the entrances to their homes. This symbol has the look of a looped cross on top of a full moon.

The Trinity Knot is a symbol of both the Wicca faith as well as the Celtic culture. While this symbol is said to have many meanings, one of the most common is the belief that the three points of the symbol are aligned with the three most important natural elements: earth, water, and fire. This symbol looks like a three-leafed clover.

Anyone who has seen movies that were set in ancient Egypt is familiar with the Ankh symbol. It resembles the traditional Christian cross, but it features an oval at the top instead of the top bar of the cross. Much like the Egyptians, followers of Wicca and other neo-Pagan religions view it as the sign of eternal life.

The Elven Star, also known as the seven-pointed star, is a sacred symbol in the Wicca religion. It encompasses the sacred number of seven, which many religions, including Christianity, view as highly meaningful. More current interpretations within the Wicca faith include the idea that it depicts not only the traditional directions of north, south, east, and west, but also the directions of above, below, and within. This Wicca symbol looks like a seven-pointed star, with the top point facing upward.

The Wicca symbol, the Pentagram, is often incorrectly associated with the worship of the devil. However, it actually has its roots in ancient civilizations. It was created by the Greeks but it also carries meaning within both the Jewish and Christian faiths. Modern Wicca practitioners view the Pentagram as depicting air, water, fire, earth, and spiritualism. This is a five-pointed star, with the points connected.

All right, let's take a moment to review what we've learned about the Wiccan religion's symbols and meanings. We learned that Wicca is a faith with Pagan roots that revolves around celebration of natural cycles and season religion and that's one that is deeply rooted in ancient traditions and beliefs. The center of their belief system is rooted in the worship of both the natural elements of the world as well as the life cycles of humans. Within the Wicca religion, they embrace various symbols that illustrate either their unique beliefs or their worship of their deities, including the Triple Moon, the Horned God, the Witch's Knot, the Trinity Knot, the Ankh, the Elven Star, and the Pentagram.

What is a Triquetra? | Celtic Trinity Knot Symbol & History