Examine different types of Wide Area Network (WAN) topologies to see their strengths and weakness in communications. Learn what a WAN is and explore types of network topologies, including bus, ring, star, mesh, and tiered. Updated: 04/28/2022
Create an account

What Is a Wide Area Network?

A Wide Area Network (WAN) is a communication network of devices, which spans geographical areas. It's an interconnection across geographical locations, of multiple Local Area Networks (LANs), which are small communication networks in the same locality. WANs can be compared to a spider web. The multiple webs confined with a house (locality within building or area or country) are LANs, while when they grow to the extent that they traverse multiple houses (internationally across different countries), they become WANs. This is illustrated in these first two figures appearing here:

Network topology describes the arrangement by which the components of networks (LANs or WANs) are organized. We'll now examine the different topologies by which a WAN may be arranged. 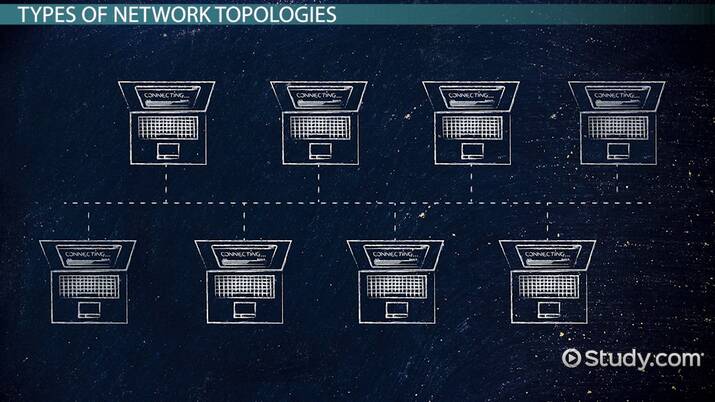 Let's first look at the bus topology. The bus topology within the WAN environment often covers small geographical areas (i.e., within the same country). The bus topology is characterized by the hard cabling (commonly called ''backbone'') in which the different sites on the network are connected by high capacity network cabling. In this orientation each site is connected in a line with the other sites via the backbone. With the exception of the sites at the end, each site is connected to another directly before and after it. This is illustrated in this next image appearing here:

In this bus topology, if a site wishes to communicate with another site, it broadcasts a message on the backbone, which is accessible and seen by all connected sites The recipient, however, will be the only one to retrieve the message.

The main advantages of bus topology is that it's cost effective and simple to implement. There is comparatively minimal cabling with each site connected by a single cable. The main disadvantages include that there is complete network failure in the event that one of the site cables fail and that an increase in the number of nodes increases the traffic on the backbone reducing network efficiency.

Let's look at something called the ring topology. As the name suggests the ring topology orientation has sites arranged in a ring. This is very similar to the bus topology discussed earlier. The main difference being there are no sites at the end. Each site is connected to each other as seen in this next figure appearing here, with the last and first sites connected completing the ring:

Network traffic can be routed in both directions. This makes this topology less vulnerable than the bus topology. If a line connection fails, traffic is rerouted in the opposite direction and communication is not lost. Repeaters are also used to maintain network integrity and prevent data loss when there are a high number of sites. This is because for n number of sites, data will have to traverse n nodes until it gets to the desired destination, increasing the likelihood of data loss.

The advantages in using the ring topology are that data transmission is multi directional and that it's cheap to install and easy to add on nodes. The main disadvantage is that troubleshooting issues can be difficult and adding or removing nodes can cause network disruptions.

Now let's take a look at the star network topology. With the star topology, the sites are arranged in a star formation. There is a central hub and each site is connected directly to the hub. This is illustrated in this next figure appearing here on your screen:

In this topology the central hub is known as the concentration router, which ensures that transmission reaches the correct destinations at all times. A failure is a site connection that does not affect other parts of the network.

The main advantage of the star topology is that adding and removing nodes is easy and the network is more robust, with the orientation preventing data collision between sites. The main disadvantages are that it requires more hardware and that the entire network's operation and efficiency depends entirely on the hub. If the hub fails for any reason the whole network goes down.

Now let's take a closer look at the mesh network topology. In the mesh topology every device belonging to the network is connected to every other device in a mesh formation. This is quite different from the previous topologies where sites are connected to a maximum of two sites at a time.

The main advantages of the mesh topology are that it's very robust and less prone to wide-scale system failure, that troubleshooting is simple, and that there is an increased level of security and privacy. The disadvantages are that implementation and configuration are more complex than the other topologies and that its implementation incurs high costs.

Now let's take a closer look at the tiered network topology. The tiered topology entails the interconnection of clusters of star network WANs by the use of concentration routers. You can see how this looks in this image appearing here:

The tiered topology with close examination is a partial mesh and bus combination. Data transmission via concentration routers helps to boost the broadcast signal in the presence of so many nodes forming the network. Numerous redundant data transmission routes makes the system very robust.

The main advantages of the tiered topology include that this is a combination of star and bus topologies; that the extension of the network is simple, easily maintained, and robust; and, finally, that troubleshooting is simpler. The main disadvantage is that it's hardware intensive and so implementation is expensive. As the number of nodes increases, maintenance becomes complex and more expensive.

All right, let's take a moment to review what we've learned. We learned all about the network topology, which describes the different ways in which the components of Wide Area Networks are arranged. And, remember, a Wide Area Network (WAN) is a communication network of devices, which spans geographical areas and is an interconnection across geographical locations of multiple Local Area Networks (LANs), which are small communication networks in the same locality. We also learned that there are different types of topologies. They include the following:

How to Design a Network: Basics & Examples

What is Communication Protocol? - TCP/IP & Explanation

What is BitLocker Drive Encryption?

What is a DNS? - Definition & Explanation