Lesson Transcript
Instructor: Tiffany Frye
Wilhelm Wundt has contributed so much to psychology with his findings and theory. Discover the historic context of Wilhelm Wundt, an overview of the birth and methods of experimental psychology, who Edward B . Titchener is and his connection to structuralism, and Wundt's theories today. Updated: 09/11/2021
Create an account

Wilhelm Wundt was a psychologist, philosopher and linguist responsible for setting up the first psychology laboratory. He was active in the late 1800s and early 1900s, at a time when the future of the discipline of psychology was unsure. Up until that point, psychology had been seen as a branch of philosophy, and that branch was dangerously close to being cut off when Immanuel Kant claimed that psychology had no viability as an academic discipline because he saw consciousness as impossible to study objectively. It was Wundt's work and his establishment of a psychology laboratory that cemented psychology's identity as a legitimate discipline. He is therefore often referred to as the 'father of experimental psychology.' 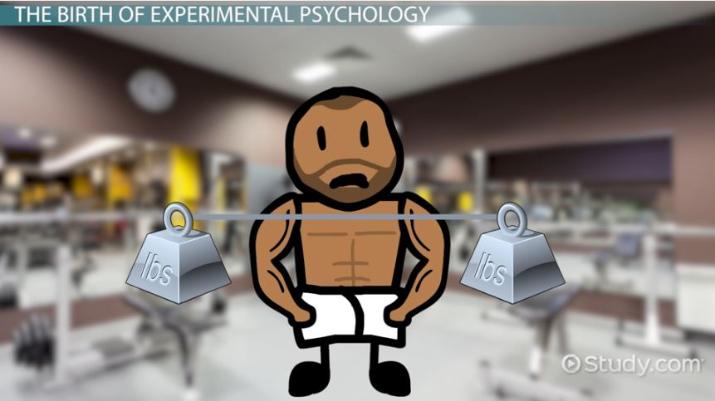 Coming up next: History of Mental Institutions

The Birth of Experimental Psychology

Wundt's work was preceded by an important breakthrough by E.H. Weber in the study of human physiology. Weber discovered that if you hold a pile of rocks in your hand, there is a specific ratio by which the weight of that pile would need to be increased before you would notice the change in weight. Weber discovered this by noticing that weight-lifters were able to discriminate between weights better when picking them straight off the floor, but when they were already holding the weights in their hands, the weight had to increase by a specific ratio before the weight-lifters noticed the increased heaviness. What was most important about Weber's breakthrough was that it was discovered not through introspection but through experimentation.

Wundt believed that this approach could be applied to experimental psychology. Experimental psychology is the branch of psychology that seeks to study the mind and behavior through empirical experiments. Wundt was one of the first people to believe that consciousness could be studied through experimentation and that consciousness and other mental phenomena should be the object of study in psychology. While these assumptions may seem obvious to us, they were a complete departure from what many philosophers believed at the time.

These days, we have MRIs, computed tomography and other methods of neuroimaging that allow us to see physiological reactions in the brain. Of course, Wundt did not have these technologies at his disposal. Therefore, he had to rely on a combination of control of external stimuli and reports of internal observations by the research subject. He believed that there were two sides to any explanation of a phenomena - the external side, measured in the laboratory, and the psychological side, measured by self-report of internal observations.

Many of Wundt's experiments, especially his earlier ones, built on Weber's work by concentrating on sensation and perception. Sensation is the physiological response to an external stimuli (for example, the mechanisms of the eye registering a round, small, red object), and perception is the psychological interpretation of sensation (for example, stating that you see an apple). Wundt's experiments consisted of varying external stimuli in a laboratory setting and then asking research subjects to report their relative internal changes. The difference between Weber's and Wundt's work was that, while Weber's experiments were only concerned with physiological reactions, Wundt's experiments were concerned with psychological reactions. Even though Wundt had strict rules about self-observation, it was because of his reliance on internal observation that critics were originally skeptical of Wundt's methods.

Edward B. Titchener and Structuralism

Edward B. Titchener was a student of Wundt's at his psychological laboratory. When Titchner left Germany and came to the United States to continue his study of psychology, he became a vocal advocate of Wundt's work and produced translations of his primary writings. However, there is controversy surrounding these translations. Many of them are considered to be mistranslated in a way that makes Wundt appear to support Titchener's ideas more than he actually did.

Titchener's work built on Wundt's to establish the idea of structuralism. Structuralism holds that every experience of the mind can be broken down into its constituent parts. Titchener also postulated theories of how these constituent elements were combined to create conscious experience.

To test his theories, Titchener established strict protocols for doing his experiments. For example, the sensation of holding a piece of ice could not simply be described as 'holding a piece of ice' but must be broken down into its elements - 'cold,' 'sharp,' 'wet,' 'square,' 'heavy.' This differed somewhat from Wundt's techniques of introspection and led to some confusion as to whom to attribute structuralism. While Titchner's ideas differed significantly from Wundt's, structuralism is sometimes attributed to Wundt since Titchner's techniques were rooted in Wundt's theories.

Much of structuralism has died in contemporary psychology; however, Wundt's legacy can still be observed. The primary place where structuralism has stayed alive is in the use of the neuroimaging techniques described earlier. When scientists take pictures of the brain or look at blood and chemical changes in the brain, they are often isolating distinct parts and functions of the brain to see how they respond to external stimuli. This division of parts and corresponding reactions has its roots in structuralism.

Wundt's experimental design is the main piece of his work that has suffered under the critical eye of contemporary psychology. Nowadays, scientists adhere to strict guidelines regarding reliability. Reliability refers to the fact that the same observation must be able to be made by multiple observers independently. Observers working independently must get the same results multiple times before those results can be considered valid - this is why you may hear of the same experiment being performed over and over again and by different scientists. This ensures that the chance of bias is low and that the results are reliable. This did not occur in Wundt's experiments. Instead, all people making observations were those trained by Wundt to think and react a certain way, and any disputes in agreement were resolved by Wundt, making the chance for bias large.

Wilhelm Wundt was a psychologist, philosopher, and linguist responsible for setting up the first psychology laboratory. He was active during the late 19th and early 20th centuries. Wundt's contribution to psychology was a formation of the field of experimental psychology, which is the branch of psychology that seeks to study the mind through empirical experiments.

Though much of Wundt's theories lived on through protégés such as Edward B. Titchener, and theories like structuralism , the idea that every experience of the mind can be broken down into its constituent parts, his style of experimentation has largely given way to stricter guidelines. However, the legacy of Wundt's work can still be felt in the techniques derived from the use of neuroimaging devices and procedures like fMRIs and computerized tomography.