Patricia has an MFA in Writing, an MS in Teaching and English Language Arts, and a BA in English.

In this lesson you will learn what William Wordsworth's 1807 poem 'The Solitary Reaper' is about. Take a look at the summary and the analysis and then test yourself with a quiz.
Create an account

William Wordsworth is one of the most important English poets and a founder of the Romantic Movement of English literature, a style of writing that focuses on emotion and imagination. Wordsworth became known as a Lakeland Poet because of the area where he lived, which is renowned for its beautiful, wild landscapes, charming pastures, and countless lakes. He was often called a nature poet because of his emphasis on the connection between humans and the natural world. He became widely successful and was named Poet Laureate of England in 1843.

'The Solitary Reaper' was written on November 5, 1805, and published in 1807 in the collection Poems, in Two Volumes. This poem is unique because while most of Wordsworth's work is based closely on his own experiences, 'The Solitary Reaper' is based on the experience of someone else, author and friend Thomas Wilkinson, as described in his Tours to the British Mountains.

The poem, like most of Wordsworth's poetry, is distinguished by its straightforward use of language and meter as well as its natural theme and imagery. It reflects Wordsworth's belief in the importance of the natural world, the power of memory and the human mind, and his first principle of poetry - that poetry should be written to provide pleasure through a rhythmic and powerful expression of emotion and leave readers with 'a spontaneous overflow of powerful feelings' long after it is read. Let's take a look at the text of the poem and then discuss what it might mean. 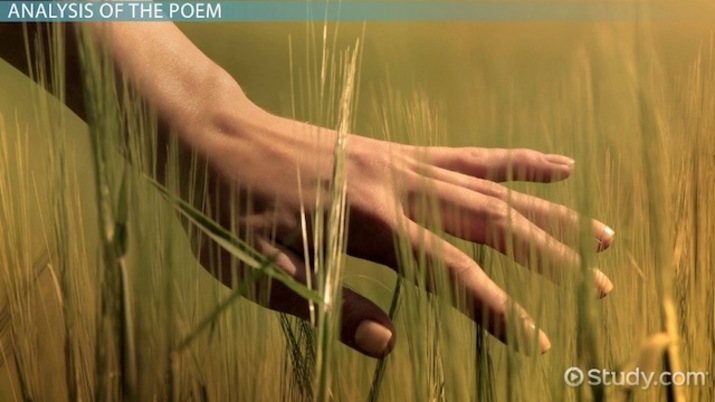 Coming up next: Death Be Not Proud: Summary & Analysis

Behold her, single in the field,
Yon solitary Highland Lass!
Reaping and singing by herself;
Stop here, or gently pass!
Alone she cuts and binds the grain,
And sings a melancholy strain;
O listen! for the Vale profound
Is overflowing with the sound.

No Nightingale did ever chaunt
More welcome notes to weary bands
Of travellers in some shady haunt,
Among Arabian sands:
A voice so thrilling ne'er was heard
In spring-time from the Cuckoo-bird,
Breaking the silence of the seas
Among the farthest Hebrides.

Will no one tell me what she sings?--
Perhaps the plaintive numbers flow
For old, unhappy, far-off things,
And battles long ago:
Or is it some more humble lay,
Familiar matter of to-day?
Some natural sorrow, loss, or pain,
That has been, and may be again?

Whate'er the theme, the Maiden sang
As if her song could have no ending;
I saw her singing at her work,
And o'er the sickle bending;--
I listened, motionless and still;
And, as I mounted up the hill,
The music in my heart I bore,
Long after it was heard no more.

The poem begins with the speaker asking readers to behold a young girl 'reaping and singing by herself' in a field. The song the girl sings is a sad song, and anyone passing by, the speaker says, should either stop and listen or 'gently pass' so as not to disturb her. He is so struck by the sad beauty of her song that the whole valley seems to overflow with its sound.

In the second stanza, the speaker compares the girl's singing to that of a nightingale and a cuckoo bird. He says that the song she sings is more welcome than any a nightingale might sing to weary travelers in the desert, and the sound of the her voice is more thrilling to hear than the cuckoo-bird in spring. He is utterly enchanted, although as we see in the next stanza, he cannot understand the language of the song and so cannot say what the song is about.

The poem ends as the speaker understands that whatever the girl sings about does not matter. It is the beauty of the song and her singing that touch his heart and linger in his mind, giving him joy as he travels up the hill and carries her song with him long after he can no longer hear it.

Analysis of the Poem

Composed of thirty two lines and divided into four stanzas, Wordsworth's poem is dominated by one central figure, a girl standing alone in a field harvesting grain. She is described as solitary, and it is this solitariness that sets her apart. She is, in this captured moment, the sole companion of Nature and in total communion with it. Her tremulous voice fills the distances, creating a mystical presence in the valley as it is enveloped by this enchanting music.

The metaphor of the nightingale points to the power and purity of her voice to wake the speaker from his daydreams. It is like a cooling shade to wanderers overcome with heat and fatigue; even the voice of the cuckoo bird in the springtime pales in comparison.

Much of what makes this poem so intriguing is the fact that the speaker does not understand the words being sung. Although he is forced to guess as to what the song might be about, in the end, what the speaker appreciates is the song's tone, its expressive beauty, and the mood it creates within him. The true beauty and power of the song lie in the speaker's experience of it as well as his memory of that experience. And as the speaker carries the girl's song with him up the hill, readers carry with them the fluid expressive beauty of the poem, as well as that 'spontaneous overflow of powerful feelings' that Wordsworth identified as the heart of poetic expression, long after the poem is read.

'The Solitary Reaper' was written on November 5, 1805, by William Wordsworth and published in 1807 in the collection Poems, in Two Volumes. This poem is unique because it is based on the experience of someone else, author and friend Thomas Wilkinson as described in his Tours to the British Mountains, not on Wordsworth's own personal experiences.

The Adventure of the Dying Detective Story Summary

To a Skylark by Shelley: Summary, Theme & Analysis

The Adventure of the Dying Detective Characters & Analysis