Wind energy, also known as wind power, uses the natural air flows in the Earth's atmosphere to generate electricity. Learn about wind energy, including its pros and cons, and explore how wind energy is produced. Updated: 09/20/2021
Create an account

Wind is something we have all experienced. Wind can drift in as a gentle summer breeze, or storm in as a powerful force capable of leaving destruction in its path. But did you ever wonder what causes the wind to blow? Wind actually gets its start from the sun. When the sun shines down on the earth, the surface of the earth is heated.

With the right technology, we are able to harness the energy of the wind and convert it into electricity. In this lesson, we will explore how wind is captured and take a look at the pros and cons of this energy source. 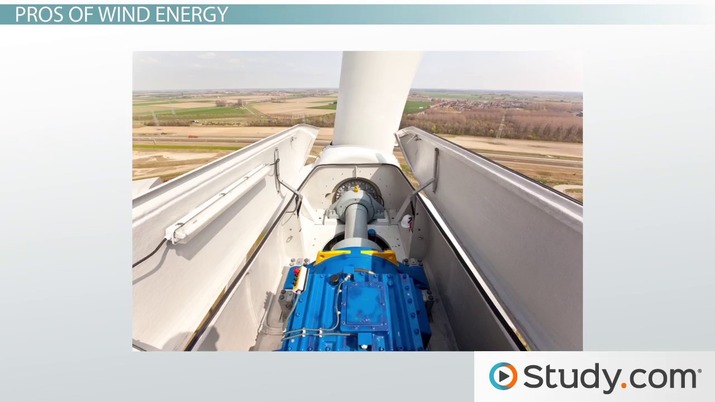 Coming up next: Hydropower: Pros and Cons

Energy is the ability to do work, and we learned that wind is moving air created by the heat of the sun. Wind energy can be simply defined as energy from the wind that can do work and create electricity.

When we talk about energy created by movement of the wind, we are talking about kinetic energy. You can recall this term by remembering that the word 'kinetic' originates from the Greek language and means 'to move.' In order to utilize the kinetic energy of the wind for electricity production, we need a way to harness its power. To do this, we use wind turbines.

There are a number of pros to wind energy. Wind energy is renewable energy. This means that as long as the sun continues to shine, we will have wind to generate electricity. Wind energy is also clean and green. Currently, developed countries gain most of their electricity and energy needs from fossil fuels, like oil, coal and natural gas. However, burning fossil fuels creates greenhouse gases that are thought to contribute to global climate change. With wind energy, there is no greenhouse gas production during operation.

Speaking of operating wind turbines, we see that wind energy comes with low operating costs. After the wind turbine is built and set in place, the power generated is essentially produced at no cost. We also see that wind energy has a tremendous potential to become a leading energy source. This is thanks to the fact that it is highly abundant, and wind energy can work anywhere the wind speeds are sufficient, which is typically best over 10 miles per hour.

Now there are also cons to wind energy, with the biggest disadvantage being the fact that wind is inconsistent and unpredictable. If the wind is not blowing, the blades of the wind turbine do not rotate and no electricity is generated. Because of winds' unpredictability, wind energy often needs to work in tandem with other energy generation systems, including those that use fossil fuels.

Environmentalists are concerned that wind farms could present a threat to wildlife. Even though wind turbine manufacturers have made positive design changes that have limited the deadly impact of turbines, birds and bats can be injured or killed by the spinning blades of wind turbines.

Let's review. Wind is created because the sun unevenly heats the surface of the earth. By harnessing the wind, we can generate wind energy, which is energy from the wind that can do work and create electricity. To capture wind energy, we use wind turbines. Wind turbines are machines that convert the kinetic energy of the wind into mechanical energy, which is then converted to electricity.

Wind turbines are often found together on wind farms, which are areas of land that contain large groupings of wind turbines. Wind farms built on bodies of water are referred to as offshore wind farms. There are a number of pros to wind energy. Wind energy is renewable energy and is also clean and green, because operation of a wind turbine does not create greenhouse gas emissions. Wind energy comes with low operating costs and has a tremendous potential to become a leading energy source, thanks to the fact that it is highly abundant.

There are also cons to wind energy. Wind is inconsistent and unpredictable. If the wind is not blowing, no electricity is generated. There is an initial cost barrier that comes with building and installing wind turbines. And, opponents to wind farms point to the fact that wind turbines generate noise and disrupt the scenery. Although they see the benefits of wind, when it comes to wind turbines, they say Not In My BackYard, or NIMBY. Wind farms could present a threat to wildlife by killing birds and bats that fly into the blades of the turbines.