Dacia has taught all core elementary subjects for 14 years with a Master's degree in Urban Teacher Leadership.

What Is Wind Erosion?

Have you ever heard of Invisible Woman? This Fantastic Four superhero can make herself unseen to others while she saves people or destroys supervillains. Did you know that nature has an invisible superhero of its own, called wind?

Wind affects the land through a process called wind erosion, where wind breaks up land and then carries the debris (like dirt and bits of rock) to other places. Wind erosion can create and destroy landforms. 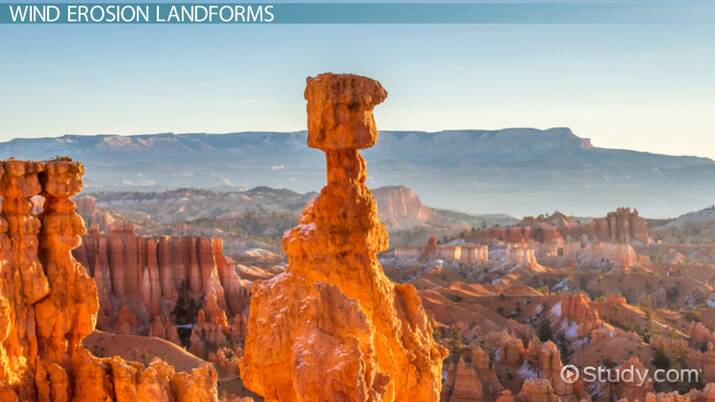 Try it now
Back
Coming up next: Soil Erosion Lesson for Kids

There are different types of wind erosion, each based on how the particles of rock, dirt, or debris are moved from one place to another. Let's take a look at the three main types:

When wind erodes the Earth's surface, all kinds of cool landforms can be created. Landforms created by wind erosion are called aeolian landforms.

Sand dunes are the most commonly known aeolian landform. Since they're made of such small granules of sand, they change form frequently due to wind.

Many people don't know this, but not all deserts are filled with sand (for example, some are made of gravel). The ones that are made of sand have a special name: erg. An erg is a very large area that is filled with wind-blown sand.

Aeolian landforms can also be caused indirectly by wind moving land debris that then hits other land. Take, for example, the ventrifact, rocks that have been sculpted and polished by sand that is moved by wind erosion.

Another interesting aeolian landform is the yardang, a thumb-shaped piece of bedrock that's created when wind erodes pieces of rock away from it and also blows sand against it. When you look at a yardang, you can tell which way the wind blows there, because it looks like it's leaning forward.

Wind erosion is the breakdown and movement of rocks and other land debris by the wind's force. The three types of wind erosion include:

When wind erosion makes landforms, those areas are calledaeolian landforms. Examples include sand dunes; ergs, or large areas filled with wind-blown sand; ventrifacts, or rocks sculpted and polished by wind-blown sand; and yardangs, a thumb-shaped piece of bedrock created from wind-blown sand.