In this lesson you will learn about the status and privileges enjoyed by women in Ancient Persia. We will look at the status and economic roles of both royal and non-royal women during this time.
Create an account

When you think of modern day Persia (Iran), you might think of the restrictions placed on women's rights, which would make you think that women had even less rights in ancient times; but Persian women, both royal and non-royal, were allowed certain freedoms that helped them gain economic independence and a place in society.

Ancient Persia was located in modern day Iran, Syria, and Turkey and thrived under three different ruling dynasties from 550 BCE to 650 CE. Although it was a prosperous and impressive civilization, many of its documents and records were destroyed during years of conquests and war, leaving only a few Greek sources to learn from. The Greeks and Persians weren't on especially friendly terms. Anyone remember the film 300? It wasn't the most historically accurate film, to say the least, but it did indeed show the strange relationship between the Persians and the Greeks quite well.

Because of this animosity, Greek sources often referred to Persian women as conniving or manipulative figures who took advantage of weak kings. But what were they really like?

The Persepolis Fortification Tablets (PFT) were stone tablets found in the ruins of Persepolis. Persepolis was the old capital of the Achaemenid Empire, one of the ruling dynasties in Ancient Persia. The PFT were administrative records that give us a look at how the Empire was run. Reading these tablets, we have found out all sorts of ways that women took on important roles in Ancient Persia. Looking at the PFT and Greek sources, we can put together a better picture of women in Ancient Persia. We know that even though the Greeks took a harsh view of Persian women, they saw that women were important figures in this civilization.

In general, we can say that Persian women enjoyed power, influence, and economic opportunities. They were involved in the military and owned businesses, and held the same jobs as men. Some women never married or had children, but this wasn't seen as a problem. However, Ancient Persian society was still patriarchal, and for the most part, men held higher positions than women.

One of the reasons that Ancient Persians held women in high regard might have been their religion. Zoroastrianism was the dominant religion, and its ideology stressed that men and women were equals. Naturally, this would shape the worldview of Ancient Persians, and we can say that, overall, women were seen as important figures in society. 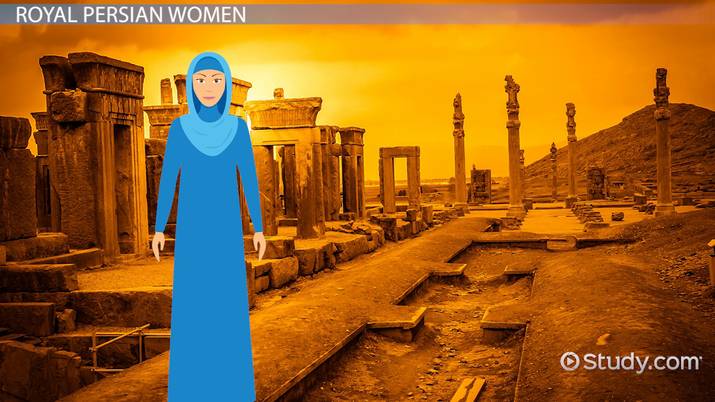 Coming up next: Funerary Beliefs, Practices & Tombs in Ancient Persia

Let's first take a closer look at royal Persian women's status in Ancient Persia. Of course, not all women enjoyed the same status or power in Ancient Persia. Royal women certainly enjoyed more influence than non-royal women. In art, we can see royal women depicted almost identically to men with similar clothes, hairstyles, and poses, so we can conclude that they enjoyed many of the same rights and privileges as men.

The status of royal women was tied to how close they were to the king. Even if a woman wasn't related to the king, being cozy with him earned respect. Even the king's concubines had influence. The mother of the king probably had the most influence, because establishing royal lineage was important for claiming the throne. Often, people will point to Atossa, who was the wife of Darius I and the mother of Xerxes (the Persian king in 300, if you recall). In Ancient Persia, if a king died, the queen could rule until the prince became an adult. Atossa was a shrewd and fierce woman, and she is perhaps the first known woman who elected to have a mastectomy after discovering a lump in her breast.

Now let's take a look at royal Persian women's privileges. Royal women could hold their own councils and advise the king. They took part in royal banquets, and traveled with the King even on military campaigns.

Finally, let's take a closer look at royal Persian women's roles in the Persian Empire. We have even heard of female military commanders, like Pantea Arteshbod, who were great warriors and leaders. Unfortunately, some of the stories of female commanders are mixed up in lore, so we can't say for sure if they existed. But historians do know a royal woman named Irdabama owned land and almost 500 workers. She also had her own seal, and made deals with other officials, as well as authorized various transactions. Having her own seal meant that she was a pretty big deal in a particular industry.

Even with these privileges, there were limits for female power. Women did not hold any government offices in Ancient Persia, and they were not allowed to conduct religious ceremonies.

As in most civilizations, we know much less about how non-royal women fared in Ancient Persia. However, we can learn about their part in the economy from the PFT.

Let's first look at their privileges. We know that non-royal women could own land and businesses. As laborers they earned equal wages to men, leading scholars to believe that a Persian woman could enjoy some economic independence. We know that non-royal women generally got the same food and wine rations as men. New moms got extra special rations. Sometimes men received more than women, but there are a few records in the PFT showing a woman receiving more, but we aren't sure why.

Now let's take a closer look at non-royal Persian women's jobs. Non-royal women were referred to by their work title, and how good they were at their job. For instance, the highest-ranking women workers were called arashshara which means 'great chief'. They were in charge of male and female workers and were well paid. From this we can guess that women were valued as important members of the workforce.

Although our evidence is limited to Greek sources and the Persepolis Fortification Tablets (PFT) (which were stone tablets found in the ruins of Persepolis, which was the capital of the Achaemenid Empire, one of the ruling dynasties in Ancient Persia), in general, it seems that women in Ancient Persia enjoyed power and respect. The influence of Zoroastrianism, the religion dominant in Ancient Persia, helped Ancient Persians see women as equals to men. Royal women enjoyed influence and power, especially the mother of the king. Some women had economic independence, owning and directing their own estates. Non-royal women were identified by their job and job rank. The highest ranking female workers were called arashshara. Women workers received the same wages and rations as men during the Achaemenid Empire.

History of the Persian Empire

The Rise & Fall of the Persian Empire