Paulina studied Creative Writing and Literature in Mexico City and holds an M.A. in Linguistics from the University of Eastern Finland.

This lesson focus on the women in D.H. Lawrence's famous novel, Sons and Lovers. It takes a closer look at Mrs Morel, Miriam Leivers and Clara Dawes and how they impact Paul Morel's life. Updated: 11/16/2021
Create an account

It's no secret that the relationship between a mother and her son can be very strong. However, in D.H. Lawrence's novel, Sons and Lovers, this bond is a bit more complicated. The novel, which was first published in 1913 follows the story of Paul Morel as he comes into adulthood. Lawrence explores the bond between Paul and his mother and the women he falls in love with. 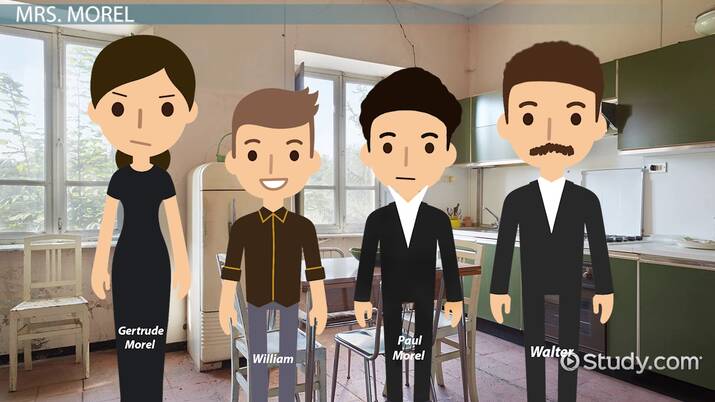 Coming up next: Miriam in Sons and Lovers

Gertrude Morel is the protagonist in the first part of the novel. She is a stubborn, possessive woman who has a hard time letting go of her sons. Trapped in an unhappy marriage to Walter, all her attention is centered on her children, William and Paul. However, soon after William's death, Mrs. Morel becomes completely devoted to Paul. Without knowing, Paul comes to be the husband and man of the house.

As their bond grows, Gertrude's love for Paul becomes unhealthy, to the point where she's unable to let him live his own life. She's the perfect example of a smothering woman. Unsurprisingly, she disapproves of the women in Paul's life, particularly Miriam.

Gertrude clings not only to Paul, but even to her life. After becoming ill, it takes her a long time to finally let go. Her illness has a big impact on Paul, as he begins to realize that he won't have his mom forever. After Gertrude finally dies, Paul is left feeling hopeless and devastated.

Miriam is Paul's first love. She is an innocent girl who lives at Willey Farm but dreams of having a better life away from the farm. Although Miriam has big ideas, she is still a farm girl; however, she doesn't get along with her family as they don't understand her. She is very religious and, like Mrs Morel, is possessive of Paul. ''You love me so much, you want to put me in your pocket. And I should die there smothered,'' Paul tells her.

Through Paul's eyes, Miriam innocence is exasperating: ''You are a nun,'' he tells her at one point. She is too shy to let her relationship with Paul go to the next level, and when she finally agrees to have sex with him, she sees it as a sacrifice. Miriam's logic is that if she's willing to sacrifice herself to Paul, then she'll have him forever.

Miriam is aware that Mrs. Morel doesn't like her and it's pretty obvious that they are both after the same thing: Paul's love. At the end of the novel Paul turns down Miriam and chooses to be on his own.

Clara Dawes is the complete opposite of Miriam. She's a liberal woman who is separated from her husband, Baxter. Clara meets Paul through Miriam and they quickly hit it off. Clara is a feminist and, like Mrs. Morel, is a woman of strong ideals. Despite coming across as completely different from Miriam, she also likes the idea of possessing a loved one. However, in her case the possessed lover isn't Paul but her husband: ''I think he belongs to me,'' she says.

Even though there isn't as much depth to her character as to Miriam's, it's still clear that she is a strong female character and the only one who has a passionate affair with Paul. They have great chemistry and Paul uses Clara as a way to explore his sexuality. Their relationship doesn't last very long as Clara decides to go back to Baxter.

In D.H. Lawrence's novel Sons and Lovers, the author portrays three very different female characters: Gertrude Morel, Miriam Leivers, and Clara Dawes. Mrs. Morel is the strongest female character in the book and the biggest influence on the protagonist, Paul Morel. She has an unhealthy relationship with her son and disapproves of the women he dates. She loves him and wants him to love her back. Miriam is an innocent and shy farm girl who also wants to possess Paul. She sacrifices herself to have him; however, Paul rejects her. Finally, Clara is Miriam's opposite. She is a separated woman and a feminist who has a passionate affair with Paul. However, she goes back to her husband and Paul ends up alone.

What is the Significance of the Title Sons and Lovers?

Relationships in Sons and Lovers by Lawrence

Sublime Art and the Romantic Aesthetic | What is Sublime Romanticism?

Love in The Importance of Being Earnest: Theme & Quotes

Congo River in Heart of Darkness

Postcolonialism in Heart of Darkness