The glamorous and gusty women in the Great Gatsby convey different messages and meanings about life, wealth, attraction, lust, and moral decisions. Learn more about the women of The Great Gatsby, the main characters, and what they teach the reader. Updated: 11/30/2021
Create an account

The Great Gatsby, a novel written by F. Scott Fitzgerald, takes place in the summer of 1922 on Long Island in New York. It is a story of love, loss, and scandal in a time of great social unrest. The author uses the characters and events in the book to make a statement about the many changes that were taking place in 1920s America. This era is frequently called the Jazz Age or Roaring Twenties because America was transforming from a very conservative country to a liberal one.

The role of women was also changing significantly because they had just been given the right to vote, and they were becoming more independent. Four women are featured in the novel, each facing different challenges and representing different ideas. Let's take a closer look at the significance of each of the women in the book. 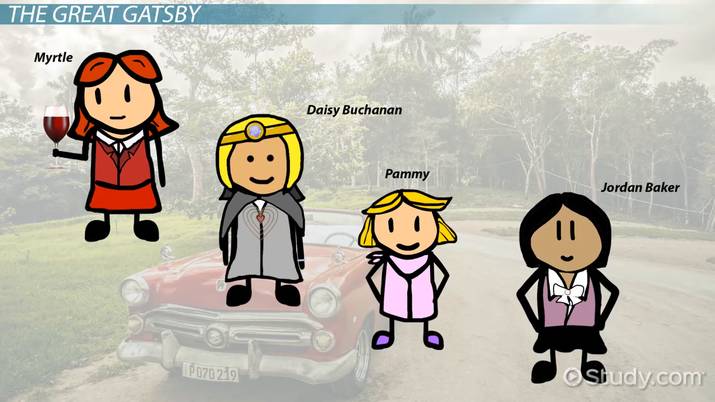 Coming up next: The Great Gatsby Characters Flashcards

Daisy is the pampered wife of Tom Buchanan, the mother of Pammy (Tom's child), and the object of Jay Gatsby's affection. She is described as the epitome of beauty and desirability. Despite the fact that Daisy lives a life of glamour and great wealth, she never seems satisfied and is frustrated by her husband's infidelity. She constantly seeks attention and the approval of others and is unfulfilled in life and in her opinion of herself.

Daisy represents the stereotypical married wealthy woman of the 1920s. She consumes herself with shallow relationships and places her value as a person solely on her appearance. She is essentially an extension of and puppet for her husband with no real personal power or freedom.

To Gatsby, Daisy represents the unattainable American dream. Gatsby's newfound wealth is not enough to win Daisy back. It does not grant him the social stature that is possessed by old-money families, like Tom Buchanan's.

Pammy is the young daughter of Tom and Daisy Buchanan. She is rarely featured or spoken of in the book yet provides significant insight regarding the ideal woman in the story. More specifically, Daisy expresses her ambitions for her daughter to become 'a beautiful little fool.'

This notion that Pammy should strive toward beauty without intelligence demonstrates the struggle that women have faced throughout time: good looks are valued. Women who are outspoken are viewed as insulting to males and less attractive in general. Daisy's wish for her daughter highlights Daisy's frustration with her own empty life and with her lack of power and control.

Jordan Baker does not fit the mold for the typical woman of 1920s America. She is an unmarried professional golfer who dates the narrator, Nick. She is depicted as attractive yet harsh. Golf has historically been a sport for males, and Jordan's presence there was not the norm for the time. Furthermore, Jordan is a cheater at the sport and demonstrates unethical behavior throughout the book.

The character of Jordan represents the harsh view on the changing role of females in society at this time. Women were seeking individuality and equality. Most men were not happy with the Women's Rights Movement because it went against the traditional view of women as the property of their husbands. Jordan's immoral behavior demonstrates society's negative opinion of women of this type.

Myrtle is the wife of George Wilson and the mistress of Tom Buchanan. Myrtle lives in the filthy rundown area of the Valley of Ashes, which divides West Egg from New York City. She is depicted as a vulgar and classless social climber who will do anything to escape her miserable and unsatisfying life of poverty and social shame.

Myrtle dies violently in the story, being run over by Daisy after darting in front of the car. Myrtle mistakenly thought that Tom had come to free her from her miserable life but instead was mowed down by his wife. Myrtle's death represents punishment for her sins and reinforces the idea that people cannot escape the social class system into which they were born. The death might also have been an attempt by the author to warn readers of what could become of them if they indulged in the greed and gluttony of the time.

The Great Gatsby by F. Scott Fitzgerald is a social statement on the changing morals and values that were taking place in 1920s America. The women in the book demonstrate the changing roles of women in society at the time.

Daisy is the unfulfilled wealthy housewife who chooses money over love. Pammy is the daughter of the uppercrust who is encouraged to be beautiful and stupid. Jordan is a modern woman who is trying to force her way into a man's world by whatever means necessary. Myrtle is the despicable mistress who pays for her social climbing and sinful behavior with her life.

Feminism in The Great Gatsby

Social Class in The Great Gatsby

Modernism in The Great Gatsby

Literary Criticism of The Great Gatsby