In this video lesson, you will learn what kinds of word problems you can expect to see that involve the greatest common factor or the least common multiple. Learn what you need to do to understand these problems and then to solve them.
Create an account

Word problems, here we go! Yes, in this video lesson, we will be learning about word problems. Now, don't get all worried. I know that word problems are sometimes the hardest part of math. But I'll show you how you can solve these word problems without breaking your brain. 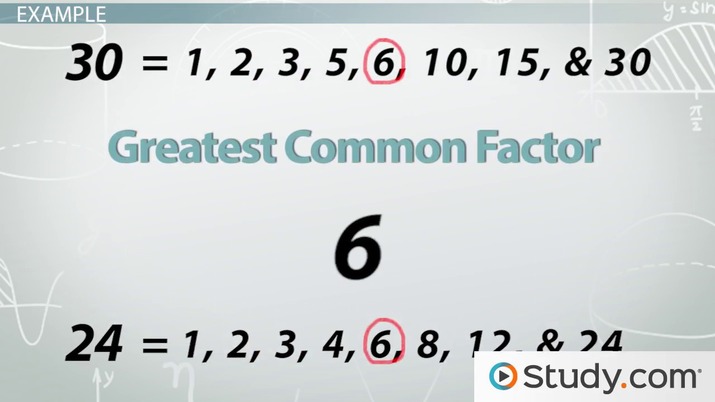 Coming up next: What is Factoring in Algebra? - Definition & Example

When you come across a word problem that involves the greatest common factor, you might see a problem like this one:

A typical word problem that you might encounter that involves the least common multiple may sound like this one:

'Mike buys this particular candy that breaks into 6 pieces, and Jenny buys another type of candy where each bag contains 15 candies. What is the least number of candies that both can split between the same number of people?'

In this word problem, the least number of candies equals the number of people to be shared with, and also equals the least common multiple. So, we can find our answer by listing our multiples and then finding the first number that they have in common. Mike can split his candies between first 6 people, then 12 people, then 18, 24, 30, and so on. Jenny can share her candies with 15 people at first, then 30, then 45, and so on. What is the first number they have in common? 30. So, 30 is our answer.

Once you are done with this lesson, you should be able to:

What is the Greatest Common Factor? | GCF Examples

Solving Multi-Step Word Problems with the 4 Operations: Lesson for Kids

How to Find the Least Common Multiple

The Commutative and Associative Properties and Algebraic Expressions

Perimeter of Quadrilaterals and Irregular or Combined Shapes

How to Compare Integers

How to Find the Unit Rate

Solving Word Problems with Plotted Data on a Coordinate Plane