Leslie holds a PhD in English and a M.A. in Creative and Media Writing from Swansea University, as well as a B.A. in English and French from the University of New Mexico, Albuquerque. She has experience teaching at the University level, and has taught courses ranging from science fiction and gothic horror to script development. She has multiple academic and non-academic publications, and work experience as a fiction editor.

In this lesson, you'll be introduced to some of the most important figures in World War I poetry. These will include soldier-poets and civilians. We will look at some of the most enduring poems and examine their themes and what they have to say, analyzing individual lines.
Create an account

World War I (1914-18) was one of the most climactic events of the twentieth century. There were more than 41 million casualties worldwide. The mechanization and sheer scale of the conflict was matched by a change in poetry; more than 2,200 poets from Great Britain and Ireland alone wrote war poetry. For the first time, the soldier-poet became a distinct figure in literature. In the last one hundred years, the idea of World War I poetry has typically emphasized soldier-poets over civilians, male writers over female writers, and English poets over other nationalities. World War I poetry includes a wide range of themes and voices. Four of the most important themes are the abstract rhetoric of honor, injury, gender relations, and poetic formalism. 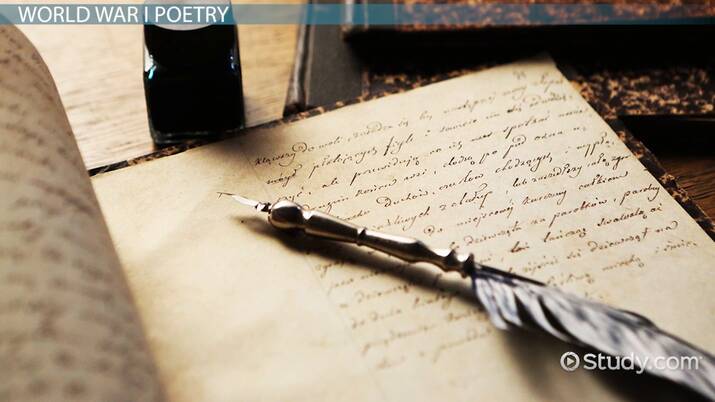 Coming up next: U.S. Involvement in WWI Lesson Plan

Generally, the soldier-poets of World War I are divided loosely into two groups: the early and late poets. The early poets tended to write poems that endorsed the cause of war and emphasized abstract notions of honor. The late poets tended to be more anti-war and either abandoned abstraction to focus on the details of the war experience or contrast abstract ideas with cold, hard reality. Probably the most famous World War I poem, which belongs to the early group, is ''In Flanders Fields'' (1915) by Canadian John McCrae, which begins with the lines ''In Flanders fields the poppies blow / Between the crosses, row on row.'' In this poem, which commemorates the war dead, McCrae's use of the imagery of the red poppies in a Belgian field was so striking, the red poppy remains a well-known symbol for World War I in Great Britain in particular, and for veterans in general.

Rupert Brooke is also one of the early soldier-poets. A well-to-do man educated at Cambridge, Rupert Brooke's patriotic verse was celebrated during his lifetime. Poems such as ''The Dead'' (1914) are awash with imagery and lyricism. The poem concludes by equating a good death with glory, ''He leaves a white / Unbroken glory, a gathered radiance, / A width, a shining peace, under the night.'' The abstract rhetoric of honor formed the basis for much wartime poetry, but little of it strikes a modern audience as effective or unpretentious. Rupert Brooke died early during the war, and later poets lived to provide a much more harrowing experience of life in the trenches.

Wilfred Owen and Isaac Rosenberg, two of the later war poets, epitomize the dirty, frantic, and painful nature of trench warfare. Despite the persistent belief that all World War I poets were upper-class English officers, soldier-poets tended to be educated and come from largely middle-class backgrounds (Rosenberg was an exception).

Wilfred Owen was one of the most important World War I poets, writing that: ''My subject is War, and the pity of War. The Poetry is in the pity.'' Isaac Rosenberg discusses the aftermath of injury on dead bodies in the nightmarish ''Dead Man's Dump'' (1922). The bodies of soldiers killed, Rosenberg writes, are returning to the earth; there is no appeal to glory and a peaceful end, as Brooke had previously alluded. Mutilation is written about baldly, as in these lines: ''The wheels lurched over sprawled dead / But pained them not, though their bones crunched, / Their shut mouths made no moan.''

Injury became a major theme in World War I poetry as disfigurement and emotional damage were suffered by so many combatants. Wilfred Owen's confrontational ''Disabled'' (1917) tackles the theme of injury head-on. The wounded veteran has lost arms and legs, and this visual record of his injuries ostracizes him from civilian society. Shocking lines like, ''leap of purple spurted from his thigh'' emphasize war injuries and post-war trauma whereby able-bodied readers are invited to imagine the man's existence.

Some of the later soldier-poets experienced annoyance and even anger at female civilians during the war. In terms of gender relations, a lot of women accepted the patriotic idea of war epitomized in poems like Rupert Brooke's ''The Dead'', which many combatants found naïve or insensitive. Siegfried Sassoon, a late war poet, expressed this in ''Glory of Women'' (1918). This poem addresses these women as Sassoon sees them: ''you believe / That chivalry redeems the war's disgrace.'' Sassoon finds these women superficial, stating that they only find certain kinds of wounds heroic, those ''in a mentionable place.'' He contrasts women knitting in a domestic environment with their combatant sons' faces in the mud. Sassoon, one of the greatest World War I poets, survived the war. In 1917, he wrote, ''I believe that this War, on which I entered as a war of defence and liberation, has now become a war of aggression and conquest.''

Women's war verse of this period could be superficial, but Vera Brittain's poem ''To My Brother (In Memory of June 1st, 1916)'' displays a complex attitude toward war and soldiers. This poem is characterized by ambivalence and demonstrates the profound effect that the deaths of many men she met throughout her life had on her - for example: ''Your battle-wounds are scars upon my heart.'' While in some way it's a typically ''feminine'' poem (Brittain is physically divorced from the fighting of her brother in France), it compares the war to a ''tragic show.''

Poetic formalism was a striking theme of most World War I poetry. Most of the poems employed a rhyming structure and were set in complex verse forms such as sonnets and rondeaus. World War I poetry precedes modernism in poetry for the most part; however, the World War I experience informed many important modern poetic works such as T.S. Eliot's ''The Wasteland'' and the poetry of E.E. Cummings. ''Dulce et Decorum Est'' (1921) by Wilfred Owen not only epitomizes the formal rhyming structure typical of World War I poetry, but its title also alludes to the ancient Roman poet Horace. The Latin title means ''It is sweet and fitting to die for one's country,'' a notion that Owen questions throughout the poem.

World War I poetry responded to the conflict on a scale previously unseen and reflected a time when soldier-poets wrote verses in the thousands. Some of the early poets wrote about the abstract rhetoric of honor, while later poets, especially those engaged in trench warfare, wrote about tragedy and the mental and physical effects of injuries, making their poetry distinctly anti-war in nature. Civilian poets, including women, also contributed to World War I poetry. A lot of women accepted the patriotic idea of war, which many combatants found naïve or insensitive, and these attitudes had an effect on gender relations. Key World War I poets included Rupert Brooke, John McCrae, Wilfred Owen, Isaac Rosenberg, and Siegfried Sassoon. Notable works included Wilfred Owen's ''Disabled'' (1917) and Siegfried Sassoon's ''The Glory of Women''. Almost all World War I poetry employs the use of poetic formalism, including traditional verse forms. For the most part, it preceded modernism in poetry. However, the World War I experience informed many important modern poetic works, such as T.S. Eliot's ''The Wasteland'' and the poetry of E.E. Cummings.

Why were poets like Siegfried Sassoon annoyed and angry with women civilians in poems like 'The Glory of Women'?

A Passage to India: Themes & Analysis

History of the Vietnam War for Teachers: Professional Development