Although the League of Nations was created following World War I with the primary goal of preventing future conflicts, the world was once again engaged in the Second World War within two decades of the first. Explore the factors leading to WWII, and examine key fascist, Axis leaders and Asia's roles in America's declaration of war. Updated: 01/05/2022
Create an account

Many students have the mistaken impression that World War II was prompted by or linked to the Holocaust - that's the Nazi persecution of European Jews. But, that's not an accurate understanding. To analyze the causes of WWII, we need to look back to World War I. People across the world had said that the Great War, as it was called at the time, was 'the war to end all wars.' At its conclusion, the punishing Treaty of Versailles was supposed to have rendered Germany completely impotent.

The League of Nations was formed to prevent future wars of aggression. There were numerous treaties and agreements signed between different nations in the 1920s. What's more, the Senate's Nye Committee had convinced the United States' government that WWI had been more about money than national security, leading to policies that established America's neutrality in conflicts around the world. In spite of the League being one of Pres. Wilson's priorities, the United States never joined the organization, which consequently hampered its legitimacy as a global body.

How did another world war, more destructive than the first, originate with Germany and go unchecked by the League of Nations? Why in the world did Japan get involved? And, how did America find itself in the midst of a global conflict again? 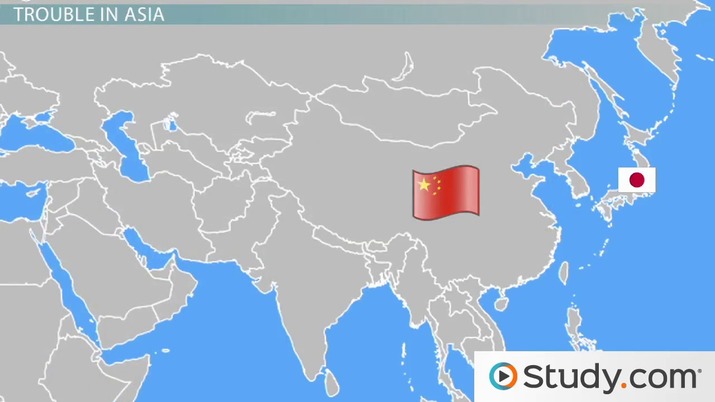 Coming up next: The Attack on Pearl Harbor: The Beginning of American Involvement in World War II

President Wilson had said that the United States' involvement in WWI would 'make the world safe for democracy.' Yet, within two decades, many parts of Europe and Asia had turned away from democracy and embraced one-man or one-party rule, and several of these leaders were not content to stay within their borders.

Benito Mussolini formed the Fascist Party in 1919, and by 1926, he had complete control over Italy. Then, he moved to reestablish the old Roman Empire by invading Ethiopia in October 1935. Yet, the League of Nations looked on; without a military force, they couldn't do much more than embargo certain exports to Italy.

Adolf Hitler was inspired. After consolidating fascist power in 1933, Germany's chancellor tested the limits of the League's power. But, nothing had happened when he withdrew his nation from the League that year, or when he announced Germany's rearmament and compulsory military service in 1935. So, when the League of Nations failed to stop Mussolini's expansion, Hitler turned his own attention outward. In 1936, he sent 32,000 troops, with air support, into an area known as the Rhineland, which was a demilitarized buffer zone created by the Treaty of Versailles.

What did the League of Nations do? It officially disapproved. Then, Germany and Italy signed a military alliance in 1936, also in violation of Versailles. Silence. Germany and Italy both sent aid to the fascist leader of Spain during that nation's civil war, though the League had forbidden foreign involvement. In 1938, Hitler's Anschluss, the reunification of Germany and Austria, went unopposed. Then, in September of 1938, Great Britain and France, eager to avoid another costly war, signed the Munich Agreement approving Germany's occupation of the Sudetenland, which was a German-speaking region of Czechoslovakia, because Hitler promised he wouldn't try to take any more territory. And then, for a few months, Europe thought that might be the worst of it.

But, Europe wasn't the only part of the world dealing with aggressive, ultra-nationalistic leaders. By 1931, China had been embroiled in civil war for four years, and Japan took advantage of this instability. In 1931, they fabricated an excuse to invade Manchuria and seize control of its resources. This reflected Japan's ambitions as a rising imperialist power and mirrored the foreign policy actions repeatedly used by Western powers throughout the era of imperialism. The international community did little to intervene until Japan invaded Shanghai the following year, where a large population of expatriates lived. When the League of Nations protested, Japan withdrew from the organization and sporadic fighting continued.

By 1937, China and Japan were in an all-out war, beginning with the recapture of Shanghai. Quickly, Japanese forces moved in on the capital city of Nanking in 1937, and America evacuated its citizens. The U.S. gunboat, Panay, and three corporate-owned oil tankers were leaving Nanking with the last of the civilians when they were attacked by the Japanese navy. Now, in order to avoid a diplomatic crisis with the United States, Emperor Hirohito claimed that the sinking of the Panay was an accident and apologized.

However, Americans were further horrified by unspeakable Japanese atrocities carried out upon the Chinese capital in the coming weeks, an event known as the 'Rape of Nanking.' The United States and other Western nations imposed severe economic sanctions against Japan and sent aid to China. These sanctions are what set Japan and the United States on a path toward war - the sanctions were the gasoline, while Pearl Harbor was simply a match. Japan was deeply reliant on obtaining resources vital to its war effort in China and its industries from Western nations. Over half of its oil came from the United States and another 10% came from the Netherlands East Indies. Japan also depended on British Malaya for iron ore while French Indochina was a source of coal and rubber. Losing access to these resources makes the Japanese decision to attack a nation with 9-times its industrial capacity and a technologically superior military make much more sense.

By 1939, Japan's war against China was floundering, and the nation, now under the influence of a military mastermind named Hideki Tojo, looked for a way to combat American intervention. In addition, French Indochina, Hong Kong, and Western-controlled treaty ports were all channels used by China to access resources and supplies from the Western powers. For any chance of success in China, Japan needed to close off these supply routes and regain access to the resources necessary for its war industries.

Some also argue that opening a war against Western nations would help the Japanese government justify its lack of success in China to the Japanese public. Another factor fueling a willingness to take aggressive action was the Japanese leadership's deep resentment of the racist treatment they received at the hands of the Western powers. This was first seen at the humiliating rejection of Japan's request for a statement about racial equality in the Treaty of Versailles. The United States and even Canada had also implemented racist anti-Japanese immigration policies during the interwar years. Later, Britain nonchalantly abandoned its alliance with Japan in favor of an alliance with the United States. This pact had dated from 1902 and included a clause which would have required Britain to remain neutral if Japan went to war with the United States.

Now, let's see how all of this fits together. On September 1, 1939, the fast-moving, well-trained German army stormed across the Polish border from the north, south and west, while Soviet troops moved in on the helpless nation from the east a couple weeks later. Finally, the European democracies had enough. The invasion of Poland prompted Britain and France to declare war on Germany. Within months, Hitler's army controlled most of northern and western Europe, and his air force was keeping Great Britain at bay.

Suddenly, General Tojo saw the answer to his supply problems. The European nations were no longer in any position to defend their colonial possessions in Asia. If Japan could get control of the Dutch East Indies, British Malaya and French Indochina, Tojo would have the resources he needed to continue his conquest. Capturing British Hong Kong and other key transport links would block Western governments from supplying aid to China. Japan formally made an alliance with Germany and Italy in September 1940, forming the core of what we call the Axis powers. Soon after France's defeat to Nazi Germany, Japan occupied French Indochina. The former French colony is now composed of the independent nations of Cambodia, Laos, and Vietnam.

Still, the U.S. refused to declare war. Instead, the government allowed certain types of arms sales to its European allies and instituted a complete oil embargo against Japan. In 1941, both Germany and Japan wanted to discourage American involvement in their conquest schemes and weaken America's ability to fight just in case it did decide to declare war. Hitler's submarines began targeting U.S. ships approaching England. In December 1941, Tojo, now Prime Minister of Japan, decided to attack several U.S. possessions in the Pacific, including the naval base at Pearl Harbor and the Philippines, an American colony at that time. Simultaneously, Japanese forces began an invasion of British Malaya and an assault on Hong Kong. These were largely predictable moves to support Japan's survival and to have a chance at success in its war with China. The world had already been at war across Europe for three years and in East Asia since the 1930s, but now the United States was forced to take an active role in the war.

Despite measures taken by the victors after WWI to prevent another global conflict, WWII erupted within 20 years. Many nations had welcomed authoritarian rulers, and the League of Nations proved completely ineffective at stopping them:

After completing this video lesson, you should be able to: