Writing equations with inequalities, or comparing the sizes of two values, can be done in four different ways. Learn about inequalities, the possible inequalities, true or false statements, and open sentences. Updated: 09/30/2021
Create an account

Picture two pie slices with one being bigger than another. We can use inequalities to tell us which is bigger. What exactly is an inequality? Think of it as comparing the sizes of two values. The word 'inequality' literally means not exactly equal. So when we are using inequalities, our two values may not be equal and it is our job to figure out which value is the larger one.

To help us do this, we have symbols we can use. And these symbols actually are very good at telling us which one is bigger. For example, to say that 2 is greater than 1, we use the greater than symbol ( > ) and write 2 > 1. You can remember this sign easily because it looks like a mouth that is opening towards the bigger number. Who wouldn't want to eat the bigger number? It's like getting the bigger slice of pie! 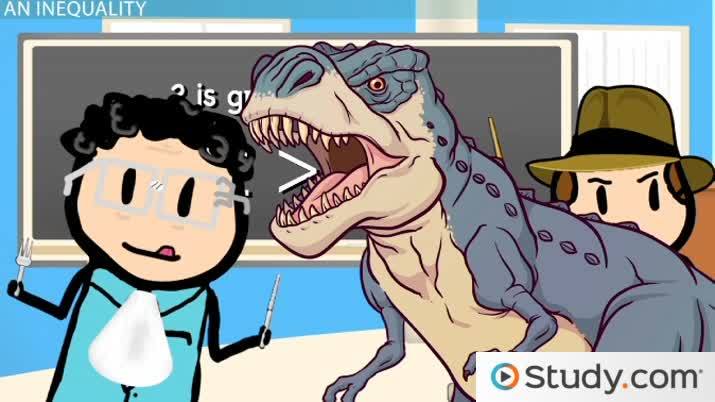 But, did you know that we have three other inequality symbols at our disposal? If we flipped our sign to look like this ( < ), we now have what is called the less than symbol. That's right, you guessed it! The smaller number is written first and the larger number second so that the mouth is towards the larger number. So we can write, for example, 1 < 2, and we read it as 1 is less than 2.

Greater than or equal to:

Less than or equal to:

Here is where we get into true or false statements. Sometimes we are given a problem that asks whether a particular inequality is true or not. For example, we may be asked to determine whether the statement 80 > 90 is true or not. How do you work with these problems? Well, you use your knowledge of counting and which numbers are larger to compare the numbers, and then you look at the symbol to see if it is the correct one.

So, to determine whether the statement 80 > 90 is correct, we first compare the two numbers, 80 and 90. Which of these numbers is larger? 90 is, of course, larger than 80. Now we look at the symbol used. We see the symbol used is the greater than symbol. So, we read, 80 is greater than 90. But wait, that's not true because you know that 80 is smaller. So this means that the statement is false. If we rewrite the statement as 80 < 90, we would then have a true statement.

How Do I Use a System of Equations?

How to Write Equations & Formulas

What is a Variable in Math?

How to Solve 'And' & 'Or' Compound Inequalities