Recidivism is a significant issue for juveniles convicted of a crime. Learn how to combat the recidivism problem among juvenile offenders by exploring the definition, programs, and supervision of youth aftercare and reentry into society. Updated: 01/12/2022
Create an account

What do juveniles do after being released from a correctional facility? How many return to their homes and schools? How many reoffend and end up incarcerated again? It's estimated that only about a third of juveniles return to school after their release and three quarters are arrested again within their first three years out of prison.

The goal of the juvenile justice system is to focus on rehabilitation, which means helping the juvenile return to normal life through treatment. Like with any goal, there are unfortunately times when the system does not succeed. Barriers, such as lack of funding, overcrowding in facilities, and large caseloads, can prohibit the system from providing adequate support and guaranteed services.

And even if correctional facilities provide the best treatment and make significant progress with regards to rehabilitating the juvenile, those who get released to their old environment are exposed to many of the challenges that resulted in their offending in the first place. This explains why juveniles are likely to reoffend shortly after release; however, with the use of ongoing support in the form of aftercare and reentry programs, juveniles are less likely to return to their old ways. In this lesson, we'll take a look at the ways that the juvenile justice system attempts to support offenders after their release from prison, with the knowledge that in practice, these things don't always happen. 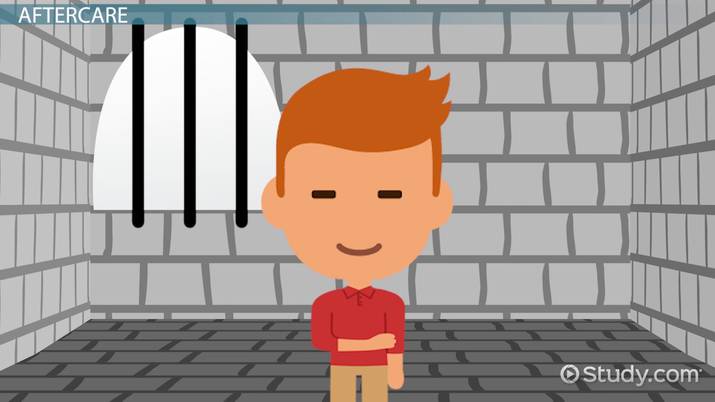 Aftercare can be explained as post-release services and supervision that provide ongoing support to the recently released juvenile. The goal is to reduce the likelihood of recidivism (or reoffending). These services are intended for juveniles who were placed into confinement, including correctional facilities, residential treatment programs, camps, detention centers, and group homes. The services usually begin while the juvenile is still incarcerated so there is no lapse in support. Some programs even invite family members and professionals from outside sources into the facility to meet as a group. This ensures that everyone is familiar with and understands the juvenile's aftercare plan

Reentry is defined as entering back into the community after being confined. When juveniles re-enter their community, they're faced with a host of barriers, including difficulty finding employment, lapses in education, lack of family support, negative peers, struggles with mental health, and substance abuse. The juvenile justice system and related agencies play a huge role in supporting the released juvenile to increase the chance of success. Some institutions and programs have adopted a 'think exit at entry' mindset, meaning the juvenile works with a professional regarding his aftercare plan, beginning when he enters the institution's door.

Surveillance programs, such as parole, are designed to keep an eye on the released juvenile and to set limits and conditions. The amount of time a juvenile remains on parole is decided by the court, and not all juveniles will be placed on parole after being released. A number of factors contribute to being placed on parole, including the results of their disposition (sentence), type of offense, whether or not they are a repeat offender, and an early release.

Parole conditions can include meeting with an officer, drug testing, electronic monitoring, house arrest, employment verification, and placement into a halfway house. The goal is to keep track of the juvenile, hold him accountable to the conditions set by the court, and decrease the opportunity to reoffend. If specific problems arise or if the juvenile does not meet the conditions of his supervision, a number of interventions can be used, including, fines, counseling, intensive supervision, and placement into a residential or correctional facility.

Services and What Works

The juvenile justice system and surrounding community agencies provide services to released juveniles to aid in their reentry process. These services include mental health counseling, substance abuse counseling, case management, family therapy, employment, housing, and financial assistance. Professionals within the correctional facility a particular juvenile was confined to will help them connect with these services prior to being released. They might also assist the juvenile with things such as making phone calls, setting up appointments, and securing transportation. Once released, parole officers can assist the juvenile in connecting to these agencies as well.

Research on aftercare and re-entry services has concluded that the more controlling and forced an aftercare service is (for example, being on parole), the more likely it is that the juvenile will reoffend. Programs that are less restrictive and focus on connecting the juvenile to services within the community are more effective and offer the juvenile a better chance of succeeding. It's critical for the professional (counselor, case manager, parole officer) to assess the juvenile's specific needs to ensure an effective and individualized aftercare plan is designed.

The goal of the juvenile justice system is to rehabilitate instead of punish. However, without the help of aftercare and reentry programs, it would be useless to work on rehabilitation while incarcerated. This is because juveniles who do not have ongoing support are likely to reoffend once they return to their old environment.

Aftercare and reentry programs are designed to support the juvenile with reintegrating back into society. They offer services for a number of risk factors and some have been proven to be effective. For those juveniles who require additional and more intensive support, parole conditions are set. Even though parole is designed to reduce the opportunity for criminal behavior, it has actually been linked to higher recidivism rates than other aftercare and reentry services.

What is a Diversion Program in the Criminal Justice System?

What Is Probation? - Definition, Rules & Types