Michelle is a corrections therapist at a state prison. She has also taught classes at community college. She holds a Master's degree in Psychology and a Bachelor's degree in Sociology.

Most children act in negative ways at some point in their lives, so what really defines youth violence? This lesson examines different types of youth violence, as well as risk factors.
Create an account

200,000 children between the ages of 10 and 29 die each year, according to the World Health Organization (WHO). You might be asking yourself, why? What's the cause? Car accidents? Disease? The answer, unfortunately, is homicide, which is one form of youth violence.

Youth violence can be defined as any intentional act using physical force against another person or group with the consequence of injury, mental harm, or death, committed by a person between the ages of 10 and 24. There can be varying degrees of youth violence; some acts, such as bullying or pushing, may result in more mental than physical pain, while acts like assault or robbery can lead to serious injury or even death. Youth violence can have very severe consequences for children and adolescents. In fact, youth violence is the 'third leading cause of death for people between the ages of 15 and 24,' according to the Centers for Disease Control and Prevention. 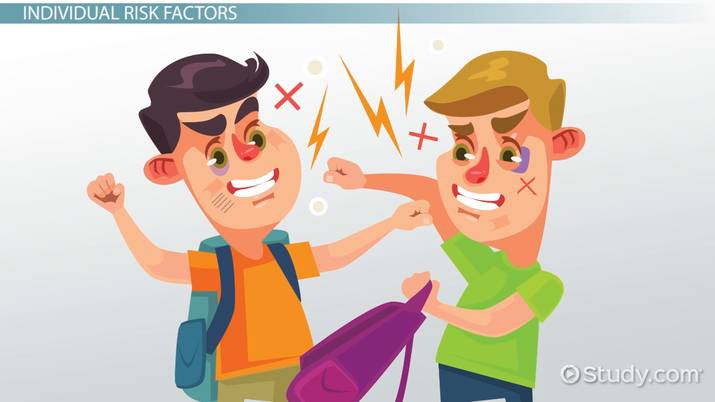 Coming up next: Benefits of Exercise for Children

Youth violence can range in severity from hitting and pushing to actual physical or sexual assault. The following are all considered examples of youth violence, listed in order of seriousness:

Although being a victim of violence is a risk factor for a child to be a perpetrator, or one who carries out a violent act, there are other risks that might not be as obvious. A child diagnosed with a learning disability or cognitive disorder, such as ADHD, has a higher risk of engaging in youth violence. Other risk factors include the following:

It is important to note that these individual risk factors do not cause youth violence; however, they increase the chances a child will engage in deviant behavior. For example, many toddlers act aggressively as they are learning to interact with peers and handle emotions such as anger and frustration. Once children reach a certain level of cognition, which is a fancy word for thinking, they can better handle their feelings, and the aggression tends to subside. For children who do not learn emotional regulation and impulse control, the chance of acting violently increases.

Since violent patterns tend to run in families, it is important to look at those dynamics as risk factors. You might believe being extremely strict keeps children from acting out, but being an authoritarian parent is actually a risk factor for youth violence. The other extreme in parenting, being permissive, is a risk factor as well. Children need limits, which permissive parents do not provide, or provide inconsistently. On the other side, harsh discipline that does not allow a child to learn and grow from mistakes can lead to acting out as well. Other family risk factors for youth violence include:

The best environment for children is one that provides loving support with consistent rules and structure. Children who misbehave or make mistakes need to understand not only what they have done wrong but also how they can correct the mistake in the future.

The involvement of the peer group peaks in adolescence, and a majority of youth violence is perpetrated by children between the ages of 12 and 18. It makes sense that risk factors within the peer group be examined carefully. Children who associate with negative peers or join gangs have a higher chance of acting in violent ways, but so do kids who are socially rejected. Children who do not have a chance to participate in normal activities for their age are also at an increased risk. Other social risk factors include the following:

Youth violence is a serious problem not just for children, but also for their families, friends, and communities, too. Not only is youth violence the third leading cause of death for children between the ages of 10 and 24, but it is also responsible for a majority of injuries requiring emergency room treatment or hospital stays. Youth violence can have a lasting, negative effect on the health and well-being of children, leading to school dropouts, unemployment, and even death.

Point of View in Death of a Salesman

What is the Internet? - Definition & Explanation