Joanna has taught high school social studies both online and in a traditional classroom since 2009, and has a doctorate in Educational Leadership

The Mongols who ruled China in the 1200s CE established a social structure, and economy, all their own. If you would like to learn more about the Yuan/Mongol Dynastic rule of China, this lesson is just for you. Updated: 01/03/2022
Create an account

Have you ever wondered why the Chinese built the Great Wall of China? The mighty horse-bound warriors from the steppes of Asia, known as the Mongols were the original reason why.

The area of Asia where the Mongols lived was called the steppes, and it resembled prairie land in that it was flat, vast, and mainly grassy and treeless. The Mongols were feared throughout Asia, and Europe as well, due to their advantageous location between both continents. With little natural resources on the steppes, the Mongols made themselves into warriors poised to conquer and plunder their way into an empire.

The Mongols relied mostly on horses and would go into battle as a huge cavalry, which could attack with lightning speed. They carried swords, which were curved in the middle, allowing them to decapitate their enemies while galloping. Mongol archers were so skilled, they could shoot with alarming accuracy, even upon horseback. 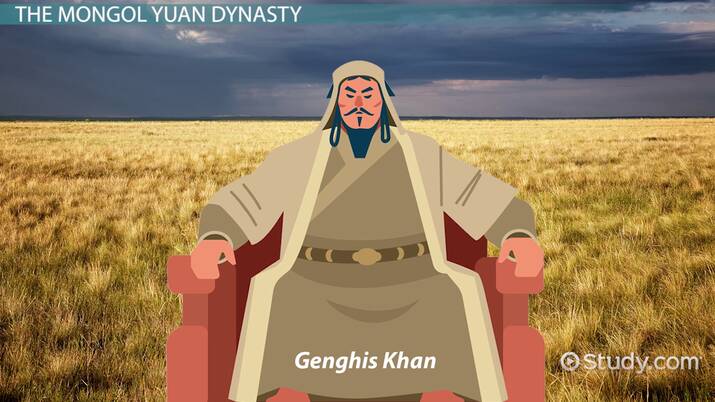 In 1204 CE, the first major Mongol leader Genghis Khan was able to do the impossible. The Mongols were many tribes who hated each other. These tribes all had their own khans (leaders) and frequently warred with each other. However, Genghis was able to unify all of the Mongol tribes under his leadership, making him the ''Great Khan'' of all Mongolia.

Genghis cemented his rule through unbridled brutality. Keeping a warring people together is no small feat, and Genghis was able to accomplish this task by dealing with opposition harshly, even family. For example, when Genghis was still young he killed his half-brother in an argument.

Genghis also used tactics like killing all males over a certain height, to prevent survivors taking revenge, and boiling his foes alive to inspire fear of rebellion against his rule. In 1211 CE, Genghis attacked and conquered the northeast of China called Manchuria.

Then, in 1219 CE, Genghis started his brutal attack on the Muslin Khwarizm Dynasty. After slaughtering each and every one of the men, women, children, and animals his army encountered, Genghis then added Khwarizm territories to the Mongolian Empire in 1221 CE. Genghis died in 1227 CE, and his son, Ogedei, became the next Khan.

However, it would be Genghis' grandson Kublai Khan also called the ''Wise Khan,'' who finally conquered southern China's Song Dynasty in 1279 CE and brought all of China into the Mongol empire; by then it had become known as the Yuan Dynasty.

Although the Mongols were mighty, they had the shortest rule in Chinese history, ending in 1368 CE. While they ruled China they instituted a social structure that was much different than preceding dynasties.

For example, the Yuan Dynasty mingled with foreigners, something dynasties before and after didn't do, thanks to longstanding xenophobia and isolationism within aspects of ancient Chinese culture. The famed Venetian explorer Marco Polo was a huge figure in the Yuan court and held sway with Kublai Khan, his family, and his government. Polo lived among the Yuan court for many years and became one of Kublai Khan's most important advisers and bureaucrats during his conquest of China.

The Yuan government was centralized in that the force behind their empire was always in the hands of the Khan. The Khan would break the government into portions in which powerful agents (like Polo) would rule, with the Khan's approval in all things.

The ethnic Chinese, known as the Han, largely outnumbered the Mongolians who controlled China. To favor the Mongols, Kublai Khan created a caste system, placing the ethnic Mongolians on top in a hierarchy of importance. Each ethnic group was organized based on the dates in which they were defeated.

The top class, was, of course, the Mongols. After which, came the Semus of central Asia (other tribes in the steppes), followed by the Hans of northern China, and lastly, was the southern Chinese, who had belonged to the Song Dynasty. This was the Four Class System.

The third and fourth classes had to take more rigorous exams for government jobs, which meant fewer of them qualified for those positions. They also faced harsher penalties for committing the same offenses as the two top classes under the Yuan. This meant that the Mongols and Semu had the most power under the Yuan, while the Han and southern Chinese suffered greatly.

Under the Yuan Dynasty, the focus of the economy was on agriculture; the focus switched from animal domestication to the cultivation of more crops, like cotton and rice, to provide a surplus for all of China. While the Yuan controlled China, there was a constant surplus of rice to feed the growing population, and cotton was traded all over the world.

To transport the cotton from the south, and the rice, which was grown in the north, throughout the Yuan Empire, Kublai commissioned the construction of the Tonghui River Canal called the Grand Canal. For 51 miles the river ran through the empire from north to south and ensured that each part of the empire not only had transportation of food but water as well. Although highly agrarian, the Yuan economy flourished, and the textile industry of China became hugely lucrative.

The Silk Road was created by the earlier Han Dynasty in the 100s BCE and involved a series of routes from China throughout Asia, including the Middle East and parts of southern Europe. Along these trails, Chinese goods were exported out of China, while import goods from the Middle East and Europe were transported into China. Under the Yuan, the Silk Road prospered.

Unlike other dynasties of China, the Yuan rulers didn't seem to fear invasion, which led them to open China up to trade in ways their predecessors hadn't. Chinese ports were opened to other countries where goods like spices were imported from India. In addition to cotton, the silk textile industry under the Yuan was most exceptional, and Chinese porcelain was carried throughout Europe while the Yuan reigned. While the Yuan Dynasty controlled China, their empire and trade network was the largest in the world.

All right, let's take a moment or two to review. The Mongols were fierce warriors who brought all of China and parts of the Middle East and Europe to heel. Genghis Khan, the first Mongolian leader to unite the tribes, used terror and fear to bring all of Mongolia and central Asia under his domain. However, it would be his grandson, Kublai Khan, who conquered southern China's Song Dynasty in 1279 CE and brought all of China into the Mongol empire, creating the Yuan Dynasty.

Although short-lived, the Yuan constructed the Grand Canal, which for 51 miles, ran through the empire from north to south and ensured that each part of the empire not only had transportation of food but water as well and opened Chinese trade to the rest of the world through more ports and use of the Silk Road, which was originally created by the earlier Han Dynasty in the 100s BCE and involved a series of routes from China throughout Asia, including the Middle East and parts of southern Europe.

However, despite these advances, the Yuan Dynasty's rule was one of immense inequality, with Kublai Khan's Four Class System, in which the top class was the Mongols, after which came the Semus of central Asia, followed by the Hans of northern China, and lastly, was the southern Chinese who had belonged to the Song Dynasty.

Mongol Empire History, Expansion & Army | Who were the Mongols?