Amanda has created and taught English/ESL curricula worldwide, has an M.Ed, and is the current ESOL Coordinator for the Saint Louis Public School District.

Zeus is well known as the most powerful god in Greek mythology. This lesson will explore the different roles he took in Homer's, The Iliad. Check out this video lesson to learn more about the almighty Zeus and how he plays a part in Homer's epic. Updated: 01/04/2021
Create an account

What Was The Iliad?

Homer's The Iliad was written in the late eighth century B.C.E, and is an epic poem meant for oral recitation. The humans battle one another in the Trojan War, the gods interfere, and chaos ensues.

As noted in the other lessons on The Iliad, the gods play an important role in the play, as they ultimately decide the fate of the humans. Many of the immortals favor the Achaeans, so it's fated that Troy will fail. Let's dig a little bit deeper to better understand how Zeus plays a big part in this outcome. 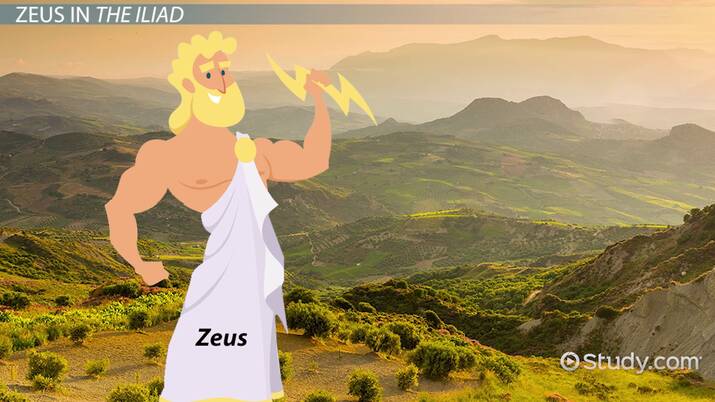 Coming up next: Honor in The Iliad

Zeus is a kind of Greek pantheon and is the son of Cronus and Rhea. He was actually born into quite an interesting situation. Legend states he was placed into his position of power by killing his father and rescuing his brothers and sisters from his father's stomach.

Yes, you heard that correctly. Cronus had killed his own father in order to take power, and was told that he would suffer the same fate at the hand of one of his children. Each time Rhea had a child, Cronus would swallow them. When Zeus was born, Rhea tricked Cronus by feeding him a stone, and secretly hid Zeus. When Zeus was old enough, he returned, defeated Cronus, and freed his siblings from his father's stomach. Thus began Zeus' role as the most powerful god in Greek mythology.

Zeus in The Iliad

There is rarely a moment in The Iliad where Zeus' presence is not felt. We are given many different impressions of Zeus throughout the play, and much revolves around his role of power, and everyone being fearful or his wrath.

Despite the universe being fearful for Zeus, ironically, it also seems he is concerned with the wrath of those on Mount Olympus. Zeus wanted to keep the peace, and seemed to be a moderator, if not a mediator a lot of the time. If he wasn't able to secretly help people out on the down-low, he had to resort to smiling, nodding, and just going along with what everyone else wanted.

When Thetis asks for Zeus to give the Trojans the upper hand, he responds that doing so will be disastrous because it will force him into conflict with Hera, his wife, who detests the Trojans. He agrees, but only with a slight nod in hopes that Hera doesn't notice.

After Aphrodite whisks Paris away from his combat with Menelaus, Zeus states the battle is done, the war should be finished. Hera is furious and demands Zeus not let the battle end until Troy is in ruins. Wishing to keep the peace with Hera, Zeus agrees, and has Athena cause the Trojans to restart the war.

He agrees to let Troy fall so he does not face an uprising on Mount Olympus. The majority of the gods and goddesses detest the Trojans, so Zeus knows the Achaeans must win.

While Zeus didn't scheme and plot as maliciously as the other gods and goddesses; he did show favor to the Trojans on a few different occasions, even though he knew they were fated to lose.

Fate plays a large role in Greek mythology. Zeus was not one to manipulate the fates; however, he sometimes struggled with them. There were times during the play when Zeus questioned deaths or outcomes that had been written.

Even the strongest willed gods can feel as if fate has played a bad hand. He watches his own son, Sarpedon, get killed on the battlefield. He only intervenes when fate has run its course, then he has Apollo remove and clean the body. Even though Hector is fated to die, Zeus struggles to put death on Hector's side of the balance-scales during his final combat with Achilles.

It's pretty clear Zeus is the all-powerful father of the universe, but he is also a fed up father who oftentimes seems ready to throw in the towel and send everyone to their room for a time out. This is evident by repetitive warnings he must give for the gods and goddesses to stay off of the battlefield, or stay out of the fight completely.

Even though he forbids them, Zeus must give multiple warnings of punishment to the immortals if they go to Troy to fight. He has to continually threaten Athena and Hera with violence, as they attempt to leave Olympus for Troy.

Okay, let's take a moment to review what we've learned. As we learned, Zeus is the most powerful god in Greek mythology, being the king of the gods, and maintains this role in Homer's The Iliad. He's ever present by playing the role of moderator and guardian to both immortal and mortal alike.

Zeus ensures fate is always met, even when it's not the outcome he desires. While sometimes tested or manipulated during the play, the gods and goddesses know they must ultimately obey and honor the mighty Zeus.

Fate in The Iliad

Divine Intervention in The Iliad

Menelaus vs. Paris in The Iliad

What Is Helen's Role in The Iliad?

Armor of Achilles in The Iliad

Hector Quotations from The Iliad

Gender Roles in The Iliad

Quotes About Achilles' Strength from The Iliad