What to Bring to NCLEX

What Test-Takers Need To Bring to the NCLEX

It is essential that individuals taking a National Council Licensure Examination (NCLEX) test bring appropriate identification with them when they are scheduled to take their exam. The ID presented must have the same name that the individual is registered to take the test under, which is presented on the Authorization To Test (ATT) email all test-takers receive.

Acceptable ID needs to be currently valid and be issued by the individual's state government or the federal government. The individual's name and photograph must all be displayed on the ID. A second form of ID with a signature is required if the ID presented does not include a signature. The signature name must match the name on the ATT as well as the secondary ID.

A driver's license, passport or other government-issued form of identification, such as a permanent resident card, are examples of accepted forms of ID. Military ID is also accepted.

If your name has changed since receiving your ATT, you'll need to bring all documentation concerning your legal name change with you to the test center. The only acceptable documents are divorce records, a marriage license and documentation from a court concerning a name change.

All individuals taking an NCLEX test must have their photograph taken at the test center. A digital signature is required. Test-takers must also have their palm scanned in order to be allowed to take the test.

The NCLEX tests can take up to 6 hours to complete, so individuals may wish to bring their wallet; however, personal items are not allowed in the test room. A storage area is provided outside the test room that test-takers can opt to use.

The items needed to complete the NCLEX-RN or NCLEX-PN tests are provided at test sites. These items include:

Possessions such as the ones listed here must be left outside the test room:

In addition to this, test-takers also can't access the following items during breaks:

Test centers provide secured storage for items such as these and test-takers will not be allowed to access them until they have completed the entire test.

Individuals are not allowed to bring people with them to the test site as well.

Actions that can carry these or other consequences include:

In order to prepare for your NCLEX test take advantage of study guides and test preparation materials that are accessible online. Resources such as the ones linked to here can help you focus on reviewing the appropriate information prior to your NCLEX test. These courses are self-paced, so individuals can move through them on their own schedule. They are also designed to be mobile-friendly, which allows individuals to work on the course from a smartphone or tablet at their convenience. 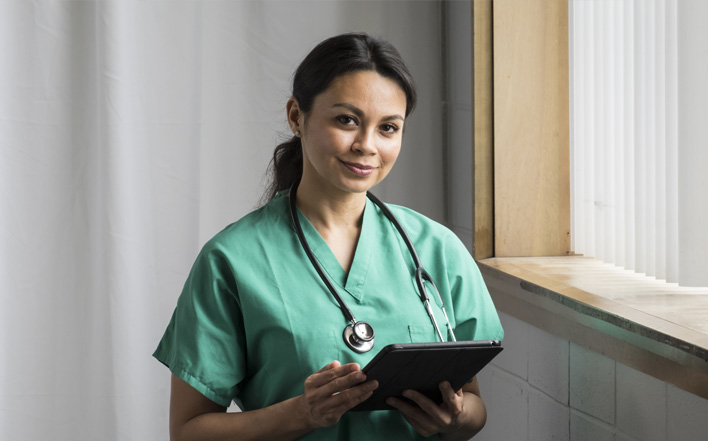 The NCLEX is an exam for aspiring nurses looking to prove their skills and knowledge. Students must pass this standardized exam in order to receive their nursing license.

Learn more about the NCLEX Exam

Our NCLEX scholarship could be yours!