The tools in this chapter on rational numbers can help your sixth grade students meet the Common Core requirements in math. Use these video lessons and practice questions to get your students up to speed on the number system.

Standard: Understand that positive and negative numbers are used together to describe quantities having opposite directions or values (e.g., temperature above/below zero, elevation above/below sea level, credits/debits, positive/negative electric charge); use positive and negative numbers to represent quantities in real-world contexts, explaining the meaning of 0 in each situation. (CCSS.MATH.CONTENT.6.NS.C.5)

Standard: Understand a rational number as a point on the number line. Extend number line diagrams and coordinate axes familiar from previous grades to represent points on the line and in the plane with negative number coordinates. (CCSS.MATH.CONTENT.6.NS.C.6)

Standard: Understand signs of numbers in ordered pairs as indicating locations in quadrants of the coordinate plane; recognize that when two ordered pairs differ only by signs, the locations of the points are related by reflections across one or both axes. (CCSS.MATH.CONTENT.6.NS.C.6.B)

Standard: Interpret statements of inequality as statements about the relative position of two numbers on a number line diagram. For example, interpret -3 > -7 as a statement that -3 is located to the right of -7 on a number line oriented from left to right. (CCSS.MATH.CONTENT.6.NS.C.7.A)

Standard: Write, interpret, and explain statements of order for rational numbers in real-world contexts. For example, write -3 oC > -7 oC to express the fact that -3 oC is warmer than -7 oC. (CCSS.MATH.CONTENT.6.NS.C.7.B)

Standard: Understand the absolute value of a rational number as its distance from 0 on the number line; interpret absolute value as magnitude for a positive or negative quantity in a real-world situation. For example, for an account balance of -30 dollars, write |-30| = 30 to describe the size of the debt in dollars. (CCSS.MATH.CONTENT.6.NS.C.7.C)

Standard: Distinguish comparisons of absolute value from statements about order. For example, recognize that an account balance less than -30 dollars represents a debt greater than 30 dollars. (CCSS.MATH.CONTENT.6.NS.C.7.D)

Standard: Solve real-world and mathematical problems by graphing points in all four quadrants of the coordinate plane. Include use of coordinates and absolute value to find distances between points with the same first coordinate or the same second coordinate. (CCSS.MATH.CONTENT.6.NS.C.8)

Sixth graders who have mastered these Common Core standards should be able to apply their knowledge of numbers to the system of rational number. They understand how positive and negative numbers are used to describe quantities with opposing values or directions. Students should also understand rational numbers as points on a number line and the absolute value of rational numbers. Use the video lessons in this chapter to help students learn about the following:

You'll know when your students have mastered these standards when they can use positive and negative numbers in real-world contexts, plot rational numbers and opposites of numbers on a number line, write and interpret statements of inequality and order and graph points on the coordinate plan to solve word problems.

How to Use These Lessons in Your Classroom

These tips are intended to help you use the materials with your current curriculum to help you meet the standards for the Common Core.

Show students the lesson 'Graphing Rational Numbers on a Number Line'. Using chalk or masking tape, create a number line on the floor. Ask students questions that will require a number for an answer, then have students plot themselves on the number line according to their answer. For example, how many pets do you have or how many different colors are you wearing?

Use Quiz Questions to Create Assignments

Supplement homework or quizzes with the practice problems found in the lesson quizzes. Use the practice questions to round out your assignments or as a template for creating new questions.

1. How to Compare Integers

In this lesson, you'll learn how numbers or integers compare to others integers. In no time, you will be able to easily and quickly determine whether one number is smaller than, larger than, or equal to another.

A number line is a visual representation of all real numbers. In this lesson, we'll learn how to identify points on a number line. We'll also practice addition and subtraction, letting the number line do all the hard work.

After watching this video lesson, you will be able to look at any rational number and compare it with any other rational number. Learn what you need to do so that you know which number is greater or lesser than another.

Number lines have many uses both in mathematics and everyday life. This lesson will teach you how to graph numbers on a number line and give real-world examples of how to use number lines.

5. The Order of Real Numbers: Inequalities

An inequality is an operation describing how one number can be compared to another. This lesson will describe and define inequalities and the symbols used to represent them. It will also give some examples on how to work with inequalities.

6. What is an Absolute Value?

When we're talking and comparing numbers, we often don't care whether its positive or negative, just how big it is. This is often called the magnitude of a number and we find it by taking the absolute value. Learn all about it here!

7. Finding the Absolute Value of a Real Number

8. Finding the Absolute Value of a Rational Number

Watch this video lesson and you will learn how to deal with absolute values of simple numbers and more complex problems. Learn the order in which you should do calculations so that your answers are correct.

9. Plotting Points on the Coordinate Plane

If you'll be working with a graph, otherwise known as the coordinate plane, it's essential to understand how it works. This includes learning the parts of a graph, identifying points and plotting points.

10. Ordered Pairs on the Coordinate Plane 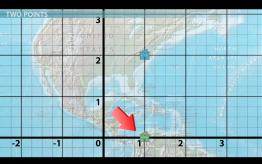 11. How to Find the Distance Between Two Points

After watching this video lesson, you will be able to find the distance between any two points on the coordinate plane. Learn what information you and how to plug them in to your formula.

Other chapters within the Common Core Math Grade 6 - The Number System: Standards course