Watch online literature video lessons to learn about some famous literary critics and find out how they helped shape the work of others. Each lesson is accompanied by a short multiple-choice quiz you can use to check your understanding of these topics.

You've likely heard of critics. They are those people who give their opinion on things that others have done. Critics may critique everything from movies to food to books. They might give an unsolicited opinion, but if they've built a good reputation people often listen to what they say, whether it was a critique that was asked for or not.

Our lessons cover several notable critics who helped define the discourse of their time. Philip Sidney is a critic that you may be familiar with. His piece The Defense of Poesy was one of the first critiques to be published. Here he gives his opinion on poetry. Find out what that opinion entails in our lesson on him.

Some critics spoke out about their personal beliefs and ideas. Our lesson on John Stuart Mill will introduce you to his ideas on utilitarianism. You'll get a chance to dive into a discussion of Mills' essays and major philosophies.

Perhaps you're more interested in a discussion of a hot topic like feminism. Mary Wollstonecraft and William Godwin are covered in our lesson that addresses this issue. Learn more about who they are, their relationship and the great achievements they shared.

The Victorian era was when we were introduced to John Ruskin. In our lesson on Ruskin, you'll get to see how criticism worked in this time period. Find out how the rules, etiquette and general ideals of this time helped build the role of a critic.

1. Overview of Literary Periods and Movements: A Historical Crash Course

When it comes to studying literature, there's about 1500 years of it to take in - and that's just in the English language! Fortunately, you can check out our crash course of key literary movements to see how the art form has developed over time.

When you hear the word 'theory,' your mind probably darts to the sciences - the theory of relativity, the theory of gravity, etc. Did you know that literature, too, is full of theory? Check out this lesson to get a basic primer on just what literary theory is, and how you might apply it.

The study of literature is a broad, diverse field. However, there's some general knowledge you should have before you dive in. Check out these terms to get a handle on the basics of prose study.

Before you start your study of poetry, you'll want to have these technical, literary and genre terms at your disposal. Read on to learn the basics of analyzing poetry!

5. How to Analyze a Literary Passage: A Step-by-Step Guide

In this lesson, we will examine the steps involved in the basic analysis of literature. Then, using a well-known fable, we will go through each step of analysis: comprehension, interpreting and drawing conclusions.

6. How to Answer Multiple Choice Questions About Literature: Test-Taking Strategies

In this lesson, we will examine test taking strategies involved in answering multiple-choice questions about literature. Breaking the process down into manageable parts, we will take a look at the literary text, the question itself, and then the given choices.

This lesson analyzes rhyme and the qualities of rhyming words. Exact rhyme is then defined using examples to illustrate the purpose of rhyming in poetry. 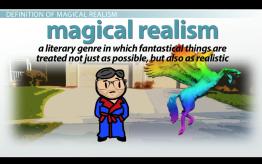 In this lesson, we will learn about magical realism. We will explore the definition and characteristics of this literary genre and learn about a few famous authors who wrote in the genre, including Gabriel Garcia Marquez.

Other chapters within the English 101: English Literature course