This chapter outlines principal events and figures of Medieval Europe. Follow along as Christianity spreads north of the Alps and power struggles erupt in the Holy Roman Empire. Uncover the reasons that universities began to displace monasteries and get a timeline of events that took place in the Great Crusades. You'll be familiar with the following topics after you've watched all the lessons in this chapter:

The settlements of Europe, from snowy Norway to sunny Sicily, have all been affected by the geography of their local surroundings. In this lesson, we discuss the influence of geography on Europe as a whole.

2. Spread of Christianity in Medieval Europe

3. Heirs of Rome: The Church and the Byzantines

The Roman Empire covered a vast area, and when it fell, its people were in danger of losing their civilization. This lesson explores some of the things that remained as the Empire fell, as well as how they affected Roman citizens.

4. Order From Chaos: Establishing Stability through Feudal Ties and Manors

This lesson will explore the impact of feudalism on European society. While explaining the system of feudalism, it will highlight how it offered protection and stability to Europe, specifically after the 5th century fall of Rome.

This lesson explains the rule of Charlemagne and his control over the Holy Roman Empire. It highlights his many military conquests and his divine rights as king, while also focusing on the role feudalism played before, during, and after his reign.

6. Charlemagne's Holy Roman Empire and the Divine Right to Rule

This lesson will explore the rule of Charlemagne and his exercise of the divine right of kings. It will highlight his reign as Holy Roman Emperor, focusing on his military conquests and his cultural reforms.

7. Vikings: From Lawbreakers to Lawmakers

Portrayed as little better than pirates, the Vikings were actually an important influence on the development of Europe as we know it. From establishing cities from Ireland to Russia and conquering England many times, the Vikings changed Europe forever.

8. Power Struggles of the Holy Roman Empire: Popes vs. Emperors

The High Middle Ages was characterized by constant struggles for power. This lesson explores fighting between the papacy, Germany, and Italy for authority over the Holy Roman Empire.

9. The Rise of Universities and Displacement of Monasteries

Before the Middle Ages, education was the responsibility of the Church. As the need for education spread to those who were not clergy, monasteries could no longer meet the needs of education. This lesson explores the decline of monastic education and the rise of the university.

10. The Magna Carta & The Constitutions of Clarendon: Definition & Significance

In the High Middle Ages, rulers fought for supreme power. This lesson explores two of the earliest documents to limit power of an authority figure, whether it was the pope or a king.

11. Charter of the Forest and the Provisions of Oxford: Definition & Significance 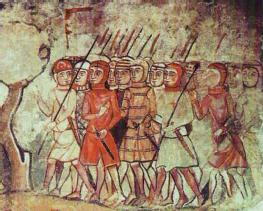 Going back almost a thousand years, the English have had an enormous impact on the democratic ideals we value today. Learn how the English were among the first to use trial by jury and many other democratic practices.

13. The First Crusade: Causes and Effects

This lesson covers the motivations of Pope Urban II in calling for the crusade at Clermont and at the religious and secular motivations of European laymen. We will also look at the startling success of the first crusade.

14. The Great Crusades: History and Timeline

This lesson examines the utter failure of the later crusades. We look at some of the factors that led to this failure. We then have a glimpse at each of the major crusades abroad, as well as the political and heretical crusades in Europe.

15. The Little Ice Age and the Black Death

Fourteenth century Europe experienced a devastating population decline due to a climate cooling, famine, and the plague. This lesson explores how these factors occurred and their impact on Europe.

16. Monasticism from St. Benedict to Cluny

This lesson will trace the history of Western monasticism from Benedict to Cluny. It will focus on the Benedictine rule while also highlight monastic contributions to society.

This lesson will list and describe the different members of the Medieval clergy. Beginning at the lower levels and ending with the Pope, it will outline the duties of each office.

18. The Investiture Conflict: Rulers vs. the Centralized Church

This lesson will explore the Investiture Conflict of the 11th and 12th centuries. In doing so, it will highlight the roles of Pope Gregory VII and Henry IV. It will also explain the Concordat of Worms.

19. The 4 Lateran Councils: The Rules and Decisions

This lesson will discuss the Four Lateran Councils held between the years 1123 and 1215 CE. In doing so, it will explore and highlight the main themes and decisions of each.

20. Heresies and Inquisitions in the High Middle Ages

During the Middle Ages the term heresy referred to religious beliefs that were in disagreement with an established Christian doctrine. This lesson explores the often violent results of the growing popularity of heretical beliefs in the High Middle Ages.

Catholicism spread throughout Europe in the Middle Ages. In response to growing power and separation from urban middle-class citizens, mendicants lived in poverty and reached out to the poor. This lesson explores the orders formed by the mendicants.

22. The Spread of Ancient Knowledge and Its Impact on the Church

Classical knowledge comes from ancient cultures like the Greeks and Romans. When Christians fought in the Crusades, they discovered some of these texts. This lesson explores the impact of classical learning on the Catholic Church in the Middle Ages.

St. Thomas Aquinas was perhaps the most important figure of the Catholic Church during the Middle Ages. This lesson examines what he did to help protect the Church against a rebirth of critical thinking by using critical thinking to defend the Church.

24. Babylonian Captivity of the Church and the Decline of Papal Authority

In the Middle Ages, the power of the papacy began to decline. A French pope chose to move his court to France. This lesson explores this event, its background, and its impact on Catholicism.

25. The Western Schism and the Tale of 3 Popes

In the Middle Ages, the Catholic church ended up with three elected popes, creating a division in loyalty. This lesson explores how this incident occurred and how it was finally resolved.

26. The Role of the Catholic Church in Medieval Europe

More than any other force, the medieval Church held Europe together. This lesson details some of the ways that the Church was able to not only maintain control but also to expand its finances and its artistic endeavors.

27. Decline of Muslim Rule in the Iberian Peninsula

Spain used to be one of the richest and most intellectually progressive places in the Islamic world. This lesson explains how Spain went from being a thoroughly Islamic region to being completely re-conquered by Christians.

Other chapters within the World History: Middle School course