Candace Lehman, Anne Butler
How did people dress in the 20s? Learn about men's and women's 1920s clothing styles and how the historical context impacted the roaring 1920s fashion. Updated: 07/07/2021

The 1920s was an era of significant changes in lifestyle and in culture. The end of WWI saw an economic boom worldwide. This time in history is often referred to as the Roaring Twenties, in North America, the Golden Age (in Europe), and Annees folles or Crazy Years (in France). The 1920s was the era of new cars, household electricity and telephones, jazz bands, growing cities, women in the workforce, the rise of consumer culture, and unprecedented economic growth.

Sexual norms, gender roles, hair styles, and skirt length all changed drastically in the 1920s. Younger generations rebelled against their parents' Victorian style and moved into a more Art Deco, relaxed, and comfortable style. Some historians say the 1920s was a revolution in morals and manners.

The 1920s fashion trends evolved for many cultural reasons. The boom in the economy allowed more people to obtain luxury products that they saw worn by movie stars and sports celebrities of the time. The youth of the 1920s rebelled from the uncomfortable, conservative, and restrictive styles of their past. They needed a more relaxed and comfortable style to fit their active lifestyles.

The Roaring Twenties era lasted from the end of WWI in 1918 until the stock market crash in October 1929. 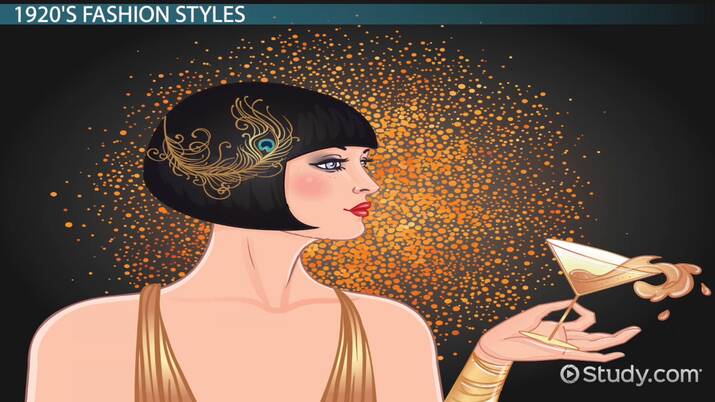 How did people dress in the 1920s? The most notable roaring 1920s fashion trend for women was the flapper style. However, 1920 fashion history includes many style changes. Many people experienced prosperity after the war and made a shift to buying ready-to-wear clothing that were both simple and casual.

The 'flapper' style emerged in the 1920s. Women who were considered flappers wore knee length skirt hems and had bobbed hair styles with a Marcel wave. The Marcel wave was a fashionable wave in the hair created with hot curling irons.

What did men wear in the 1920s? The men of the 1920s also experienced the change of formal wear, such as suits and ties, to more comfortable athletic wear.

The most fashion forward cities of the 1920s were:

Everyday dresses for most women were casual and typically homemade. House dresses, or day dresses, were loose, pullover, tubular style dresses with a dropped waist and shorter hemline. They were made with colorful prints, such as gingham, plaids, or stripes. By the end of the 1920s, women were wearing day dresses all day long either at home or in the workforce.

Women wore formal style dresses for special occasions. Some formal dresses were ankle length, but most styles followed the shorter hem of the popular day dresses. In warmer weather ladies wore elegant dresses made of sheer, layered fabrics in light colors. They would cover dresses with a fashionable shawl or fur coat even in summer months. The more flamboyant night life ladies wore a flapper style dress that could include beading, sequence, and metallic threads.

Women of the 1920s had a considerably more active lifestyle than in the past. For the first time in history, a suntanned look became more popular than a pale complexion.

Sports celebrities were very popular in the 1920s, especially tennis and golf athletes. Many fashion designers of the time reflected the style of athletic clothing into every day clothing for both men and women. A popular style was the sleeveless tennis dress that women wore both on and off the court.

The Oxford was a popular women's shoe of the 1920s and would remain a popular shoe until the late 1940s. The Oxford is a black and white leather lace-up shoe with a low heel. This was a very practical everyday shoe.

Dainty T-strap shoes were worn with more formal attire. They could be found in silver, gold, or black and often had embellishments such as jewels along the strap or on the heel. They could have up to a two inch blocky heel.

It was a cultural norm for women to wear a hat in public. Women wore hats of many styles during the 1920s.

Women also wore many accessories to enhance their overall look.

Women's hairstyles had to accommodate the hat styles of the era. In the early 1920s, women kept their hair long but styled to appear short with curls on the side and the rest in a bun. Toward the end of the 1920s women, were beginning to cut their hair into bobbed styles that were ear length. Some bobs had curls, and others featured straightened hair.

For the first time in history, women could afford to experiment with different types and styles of makeup. Many new products became available for women to purchase at an affordable price. The younger generation saw makeup as a way to rebel against the norms of the past and as well to show their individuality. By the end of the 1920s, wearing makeup was considered the norm for women of all ages. The normal makeup for day use was rouge, lipstick, and an eye pencil. The normal evening makeup consisted of more color with brighter lipstick and eyeshadow.

Men's fashion of the 1920s did not outwardly appear to change as drastically as women's styles. Their styles became more casual and relaxed. It remained customary for men to wear a suit in public. By the middle to end of the 1920s, styles of men's suits were noticeably more relaxed with longer coats and a looser cut trouser. The fabric of the suits became flashier with stripes in the suit material paired with colorful ties in bold colors and prints.

The 1920s decade is often referred to as the Roaring Twenties, the Golden Age, or the Crazy Years. This era brought about significant changes in lifestyle and in culture.

What were the fashion trends of the 1920s?

The fashion trends of the 1920s were more casual and relaxed. Women often wore knee length tubular day dresses and men often wore knickerbockers with sweater vests. The flapper style for women and the zoot suits for men were also popular in the 1920s.

The fashion of the 1920s was influenced by the economic boom after WWI and prohibition/jazz era. Men and women lived a more active lifestyle after the war and needed a wardrobe to match their new way of life.

Flapper Dress, Language & Impact | What is a Flapper?

Fashion History, Evolution & Timeline | What is the History of Fashion Design?

Jazz Age Facts & History | What Was the Jazz Age?