What is the 26th Amendment?

Voting is an essential American right—try to imagine soldiers being drafted to fight in a war they were too young to vote against! In 1971, the U.S. was fighting the Vietnam War and drafting boys as young as 18 to become soldiers. As a result of widespread protests, Congress voted unanimously to amend the Constitution by ratifying the 26th Amendment, defined as lowering the minimum voting age to 18 from 21 at the local, state, and federal levels. Though the law was largely motivated by military practices, it has since also allowed younger generations more broadly to have a voice in elections and political representation. 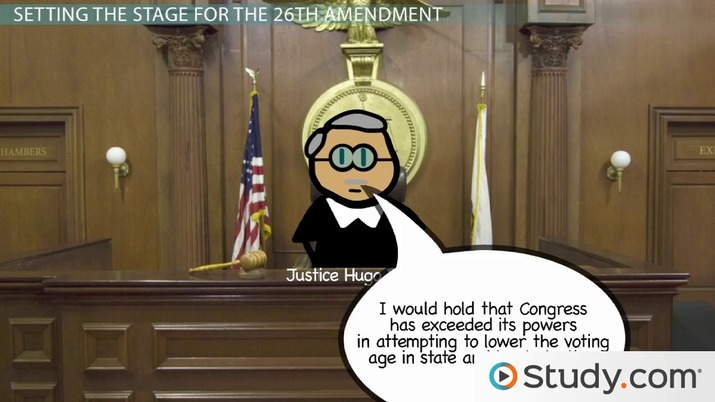 Coming up next: President Nixon and the Vietnam War

What did the 26th Amendment do?

When the founders wrote the Constitution, they created a process by which the states could amend the document if needed. Through this process, new bills can eventually become part of the Constitution, after a lengthy examination to confirm that the proposed amendment has a broad enough level of support across the country. This full amendment process has happened 27 times in United States history.

The 26th Amendment lowered the voting age to 18 by giving the United States government the power to enforce a minimum voting age. Prior to its ratification, states were permitted to lower the constitutionally defined minimum voting age of 21, but they were not required to expand voting rights based on age.

The 26th Amendment to the United States Constitution reads:

The Congress shall have power to enforce this article by appropriate legislation.

With a divided Supreme Court decision in Oregon v. Mitchell (1970), the Supreme Court justices wrote majority and dissenting opinions on the subject of granting Congress the authority to lower the minimum voting age to 18. Though the majority ruled that Congress had the authority to expand voting rights for 18-20-year-olds in federal elections, the Court limited this power from being extended to state and local elections.

Further, in addition to the widely discussed motivation for the proposed constitutional amendment of soldiers serving in war from as young as 18, U.S. Senators also noted three reasons that demonstrated 18-20 year olds deserved voting rights:

The United States went through decades of debate over having boys aged 18-21 sent off to fight in World War II, the Korean War, and ultimately the Vietnam War, without having the right to vote for the politicians who were authorizing the conflicts. Then, in 1970, the Supreme Court of the United States came to a divided 5-4 decision over Oregon v. Mitchell, a case based on whether Congress or the states had authority over recently passed provisions in Voting Rights Act Amendments that included lowering the voting age from 21 to 18. As a result, the 26th Amendment was proposed, giving states the right to vote against the expansion of rights through the ratification process. The 26th Amendment lowered the voting age to 18, securing voting rights for those soldiers and their peers.

In 1971, the 26th Amendment was ratified in less than four months, the shortest time ever taken to complete this process.

For a proposed amendment to be ratified, the bill must pass Congress with a two-thirds majority vote in both the House of Representatives and the Senate. The bill is then sent to be combined into a joint resolution, which is distributed to the States.

After being received by the Governors and sent to the State Legislatures, the bill is then voted on in a state election. If three-fourths of the states, or 38 out of 50, vote to pass, the bill is ratified as a Constitutional Amendment.

Why was the 26th Amendment passed?

The Vietnam War (1955-75) became a highly unpopular war after the Gulf of Tonkin Incident in 1964 and troop escalations beginning in 1965. Over five years, more than 2 million young men were drafted to serve in East Asia, stoking unrest especially among the 'baby boomers' who were being sent to fight. Around the country, people participated in anti-war protests, marching through cities, burning draft cards, even fleeing the country to avoid the war.

Though Americans had been debating the voting age for decades, the government finally had a reason to move forward as it attempted to quiet the protests by giving 18-20-year-olds a political voice.

When was the 26th Amendment passed?

The greatest impact of the 26th Amendment is that it gives younger people a voice in governmental representation and participation. By allowing people 18-20 years of age to participate in local, state, and federal elections, the amendment brings more people into the democratic process. The right to vote encourages young people to discuss new perspectives and become engaged in civic and political action.

One interpretation of the 26th Amendment is that it is part of a wider effort of voting rights expansion, beginning with the 15th Amendment, which prohibited voting discrimination based on race. The 26th Amendment expands voter rights by preventing government from passing laws impeding the right to vote based on age.

Though Americans had been working to find ways to lower the minimum voting age from 21 to 18 for decades, the Vietnam War draft catalyzed the result. Congress cited three reasons to demonstrate the maturity of 18-year-olds, and the escalation of anti-war protests pushed the government to expand voting rights.

As a result of the 26th Amendment, younger generations have been guaranteed suffrage and become more involved in politics.

What year did the voting age change from 21 to 18?

The voting age was lowered from 21 to 18 when the 26th Amendment was ratified by Congress and the States in 1971.

Why was the 26th Amendment passed?

Though Americans had debated lowering the voting age for decades, it was largely passed as a result of 18-20 year olds being sent off to fight the Vietnam War without having the ability to vote for those sending them. In addition, 18-20 year olds were deemed to have a basic level of education, a number of other adult responsibilities, and a need for positive and productive political outlets different from anti-war protests.

What does the 26th Amendment to the Constitution say?

The 26th Amendment to the Constitution says that neither the federal nor state governments may deny someone the right to vote based on age, effectively lowering the voting age from 21 to 18.

What Is the 17th Amendment? - Definition, Summary & History

Voting Amendments to the US Constitution | Right to Vote Amendments

Aphorisms in Tuesdays with Morrie