Copyright
Christina Keathley, Sarah Phenix
Learn about the pericardium and the three layers of the heart wall. Discover distinctive features of the pericardium, epicardium, myocardium, and endocardium. Updated: 09/23/2021

What Are the Layers of the Heart?

The heart is an amazing organ. Its main function is to pump blood throughout the body, which continues the flow of fresh oxygen to various tissues and systems. The heart is partially so efficient because of its shape. The orientation of the different compartments of the heart allows for deoxygenated blood to enter, pass to the lungs to receive oxygen, and exit back to the body. As the heart pumps, the alignment of the valves and compartments of the heart prevent the oxygen-rich blood and oxygen-depleted blood from mixing and flowing backward.

In this lesson, investigate the layers of the heart wall to better understand how they function and contribute to the circulatory system. Continue reading to answer the following questions: 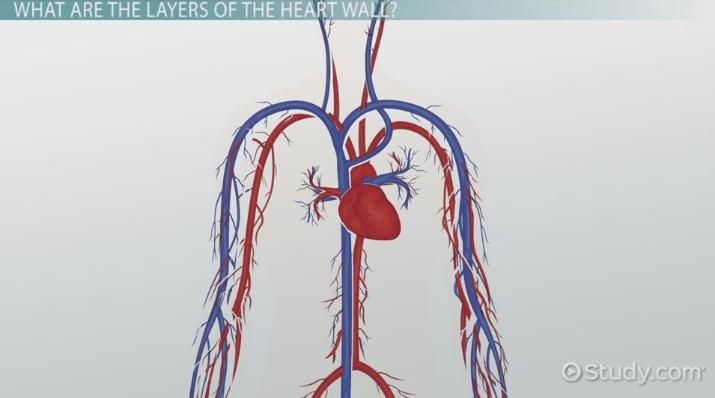 Pericardium: Outermost Layer of the Heart

As the heart beats, it expands to fill with blood and constricts to expel blood out. Because the heart changes in size as it functions, its movement would likely cause friction with other organ systems and tissues within the chest cavity. Excess friction would wear down tissue and eventually decrease the health and efficacy of the exposed tissues. To curb this potential issue, the heart is contained within a thin sac referred to as the pericardium. The pericardium contains the parietal pericardium and epicardium.

The pericardium is a layer of connective tissue filled with lubricating fluids. These fluids (called serous fluids) reduce the friction within the pericardial sac and protect the heart from potential pathogens. The production of these fluids is controlled by the epicardium and parietal pericardium. In addition to protection and lubrication, the pericardium is important in maintaining the position of the heart within the body cavity. It also prevents the heart from stretching too much by restricting the amount it can expand.

Three Layers of the Heart Wall

While the pericardium does not compose the actual heart, the heart wall is composed of three additional yet separate layers. These layers work together to form the major structure of the heart and allow it to function after endless hours of pumping. The three layers of the heart, as discussed above, are the epicardium, myocardium, and endocardium.

The epicardium has an important function within the cardiovascular system. While the heart's main job may be to circulate blood, it does not benefit directly from the blood it pumps. Instead, it must receive freshly oxygenated blood via a system of vessels, like all other organs in the body. This fresh blood is delivered through a system of blood vessels that reside within the epicardium. Thus, the epicardium is largely responsible for the delivery of fresh oxygen and nutrients to the cardiac tissue of the heart.

Cardiomyocytes are another important structure found within the myocardium. These specialized cells control the rate at which the heart contracts and relaxes. Thus, cardiomyocytes are often referred to as the pacemakers of the heart.

The endocardium also plays an important role in the conduction of electrical signals. When the fibers within the myocardium fire, their signal must be carried through the tissue of the heart to innervate different areas of the muscular myocardium. The small nerves that send these impulses reside within the endocardium.

The endocardium is composed of three layers:

The endothelium is composed of special endothelial cells which assist in the passage of material from the inside of the heart to the myocardium. The elastic layer is composed of another involuntary muscle known as smooth muscle. This is the same type of muscle found within the intestines and provides involuntary contractions. These contractions constrict blood vessels within the endocardium and force blood to move. The subendocardial layer is the layer closest to the myocardium. It acts as a layer of connective tissue to adhere the endocardium to the myocardium.

The heart is composed of three layers. The pericardium is the outside layer that does not compose part of the heart. It houses fluid that reduces friction to the heart and protects it as it pumps. The epicardium is the outermost layer of the heart and is sometimes referred to as the visceral pericardium. This is because it composes the inside layer of the pericardium and houses important blood vessels which supply the heart's tissues with oxygen and nutrients.

What are the 3 layers of the wall of the heart?

The three layers of the heart wall are the epicardium, myocardium, and endocardium. There is a fourth layer that envelopes the heart called the pericardium.

What are the three layers of the heart and their functions?

Is pericardium and epicardium the same?

The pericardium is a layer of tissue that surrounds the heart and contains fluid to reduce friction. While the epicardium is technically an extension of the pericardium, it is often referred to as a separate layer because it composes part of the heart's wall.

Types of Heart Conditions and Diseases

How Does Vision Work?