What is the Accounting Cycle?

Why is the Accounting Cycle Important?

Balance sheets, income statements, and cash flow statements are all produced from information obtained during the accounting cycle. The balance sheet provides insight regarding a company's assets, liabilities, and shareholder equity at a specific point in time. The balance sheet effectively provides a look into what the company owns versus what it owes, and details how much money was invested by shareholders. Income statements show a firm's profit and loss over a period of time by taking all revenues and subtracting all expenses from both operating and non-operating activities. The cash flow statement summarizes the amount of cash and cash equivalents entering and leaving a company. 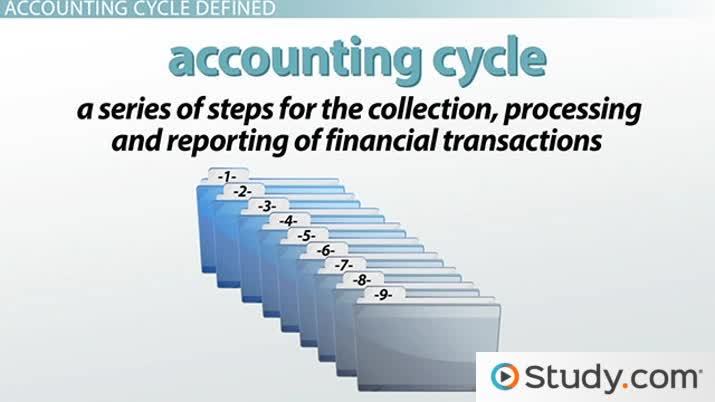 Coming up next: The Role and Responsibilities of Financial Managers

All financial transactions taken on by a company must be collected and analyzed. The analysis shows how the company's financial health is being affected. Transactions are analyzed in the order in which they occurred. Transactions are only analyzed if they are monetary and involve the business. The CEO's personal finances will not be analyzed or recorded, for instance. An analyst or accountant may analyze all sales and payments made each day to complete this step.

After the ledger posting, in which all transactions have been posted to the general ledger in the appropriate accounts, an unadjusted trial balance will be prepared. Debits, appearing on the left side of a T account, and credits, appearing on the right side of a T account, must balance. To balance, debits must equal credits. For every debit entry, there must be an equal and opposite credit entry. For instance, if an account is debited - $5,000, another account must be credited + $5,000.

After the unadjusted trial balance, any necessary adjustments are made to bring the accounts and balances up to date. For instance, under the accrual method (a method of accounting used by most larger businesses as mandated by the generally accepted accounting principles), income must be recorded when it is earned, even if money has not been received. For example, if a customer made a purchase of $500 using in-store credit, but doesn't have to make the payment for another month, the $500 would still be recorded when the sale was made under the accrual method. Expenses will also be subtracted, even if they have not yet been paid. If the company received a bill from the utility company, for instance, but wasn't obligated to pay it until a week after the bill was received, the payment would have been recorded upon receipt of the bill. This step provides a crucial first glance at how much money a company is earning and spending and is necessary to complete the sixth step.

Step six involves the adjusted trial balance being prepared. The adjustments made in the previous step must place all debits and credits in balance in order for this step to be successful. Any accounts that are still not in balance by this step will need to be further investigated and corrected.

The financial statements, such as the balance sheet, income statement, and cash flow statement can now be prepared from the information recorded in the general ledger.

By this step, all the revenue and expense accounts are closed. The balance sheet accounts, assets, liabilities, and owner's equity, are in balance, meaning debits equal credits.

The following accounting example regards someone who owns a toy store. Their accounting period is defined in one-month increments and they are going to begin the accounting cycle steps and close out the month. The toy store owner first begins by collecting their financial information regarding toy sales made per day, and payments made to the suppliers of the toys. Each transaction, once collected, is recorded in the general journal in the order which it occurred. The last sale will appear last in the journal. The journal entries are now posted to the general ledger and organized by accounts. Employee salaries and the cost of renting the toy store would be in different accounts. The unadjusted trial balance can now be prepared. The toy store owner must ensure that all the debits and credits in the general ledger are balanced. They will do that by making sure that each debit entry has an opposing credit entry. The toy store owner will record debits on the left side of the account and credits on the right. After the unadjusted trial balance, adjustments can be made. The toy store owner made a big sale two days before the end of the period and needs to record it. Although the customer bought $1,000 worth of toys on their store credit card, the toy store owner will still record the income as earned under the accrual method of accounting. The adjustments lead to the adjusted trial balance. The debits will still need to equal credits, even with the adjustments. With all the information acquired in the previous six steps, the toy store owner can now prepare their financial statements and confer with the toy store investors and upper management on what they can do to increase the store's profitability. The use of the financial statements may lead to the conclusion that some employees need to be let go, for example. The accounts are now closed. No revenues or expenses can be added into the prior accounting period. Finally, the post-closing trial balance is prepared. The owner ensures that the revenue and expense accounts are indeed closed and that the accounts which are allowed to carry balances have equal amounts of debits and credits.

The accounting cycle refers to steps taken to collect, process, and report all financial transactions a company participates in. The steps are as follows: collection and analysis, journalizing the transactions, posting to the general ledger, unadjusted trial balance, adjustments, adjusted trial balance, financial statements, close accounts, post-closing trial balance. At each step, everything should be balanced, meaning the debits equal the credits. Although steps three and four seem similar, one regards the general journal and the other regards the general ledger. The two differ because general journal entries are organized in chronological order and general ledger entries are organized by account. The financial statements that are created in step seven are used by management to make decisions about the company.

What is accounting cycle with example?

An example of the accounting cycle is a business owner collecting their financial information, journalizing it, posting it to the ledger by account, performing an unadjusted trial balance, making adjustments, performing an adjusted trial balance, preparing financial statements, closing accounts, and finally preparing a post-closing trial balance. Once all the nine steps are performed and the financial statements are analyzed, the business owner may realize they need to shut down their business.

What are the 9 accounting cycle steps?

What Is Double-Entry Accounting? - Basics & Examples

The Fundamental Principles of Accounting