Copyright
Christina Keathley, Elizabeth Friedl
This lesson will explain the meaning of accuracy and precision with respect to scientific measurements. Examples will be provided as well as a discussion of possible errors that can affect the accuracy and/or precision. Updated: 12/29/2021

To answer scientific questions, researchers collect samples from populations. A population represents an entire group of individuals. For instance, the human population includes all humans currently alive. A sample is a portion of that population, say the population of individuals from a single state.

How data is collected is important for the overall relevance of results. Michael is researching the average height of adult men. To measure every adult man on the planet would be impossible, so he takes a sample of 100 men from a local grocery store. Would the measurement he obtains represent the entire population? The answer depends on the precision and accuracy of his measurements. Precision is the ability to produce the same or similar results across multiple measurements. If all the men in Michael's sample were at or close to the same height, then his sampled measurements were precise. Accuracy is the distance a sampled mean's value is to the population's mean. If Michael found that his sample of men averaged at 6 feet in height and the average adult male height was 6 feet, then his results were accurate.

His measurements may also depend entirely on the equipment he's using to measure height. For instance, measuring height by asking individuals about their height versus using a ruler will produce different results. In this lesson, investigate accuracy and precision in more detail to answer the following questions:

There are multiple ways to measure accuracy. One of the most utilized methods is to calculate a percent error. The percent error is a representation of how far off measured values are from the actual values and are represented by the following equation:

Consider a study that is counting the number of black feral cats observed on a college campus. The following true and false values can thus be generated:

Previous literature states that the number of black cats in a colony is 10%. This study observed fifty cats and found that 15 were black and 35 were not. The prediction based on the previous data suggests that only 5 cats should be black, and thus the following values are found:

The level of accuracy can then be calculated using the following equation:

Thus, the percent accuracy in this situation is 80% if the previous literature is true of the population.

Sample standard deviation is expressed by the following equation:

In this formula, {eq}x_{i} {/eq} represents an individual measurement while {eq}\bar{x} {/eq} is the mean of all measurements within a sample. The number of sampled individuals is represented by {eq}n {/eq}.

Consider the following example. Sarah wants to know which method of measuring distance is more precise. She takes a small piece of paper and measures it five times with an electric caliper and five times with a ruler. The values she obtains from her calipers are 4", 4.1", 3.8" 4" and 4.1" while with her ruler she measures 3.5", 4.2", 4.1", 4.4", and 3.8" respectively. The mean of her results, standard deviation, and overall precision is reported in the following table:

Both methods returned the same mean which may lead one to believe that they are equally appropriate tools of measurement. However, the calipers returned similar values each time, returned a smaller deviation, and are thus more precise. 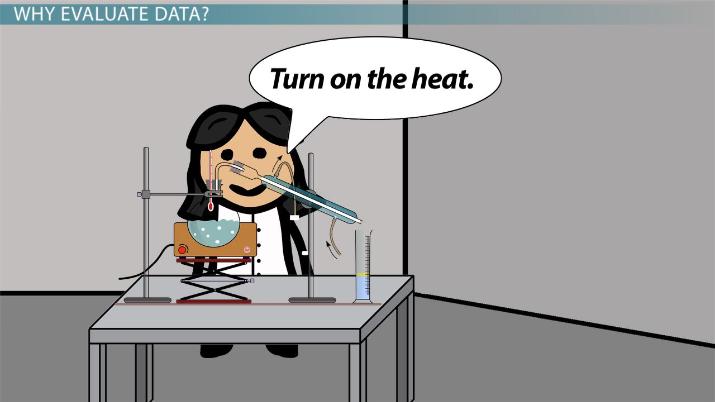 Try it now
Back
Coming up next: Using Appropriate Tools for Scientific Tests & Data Collection

Rebecca is about to start a study investigating the effect of diet on the weight of mice. Before she starts, she wants to find out which tool is best for the job. She wants a tool that not only produces values closest to the true value, but that can generate consistent values. She decides to compare an electric scale to a balance beam scale. Rebecca tests these tools by measuring a standardized one pound weight and gets the following results:

Precision errors are caused by random errors (or personal errors). These are errors that are either a result of variation seen in real world individuals or variation in a researcher's ability to measure. For instance, it may not be possible to get incredibly precise sample measurements of weight on an organism that naturally fluctuates drastically between individuals. Alternatively, while a researcher may be able to accurately measure a sample population's weight, the individual measurements may vary based on the shaking of their hand while holding the scale. Random errors are likely to be negative or positive and occur without recognizable patterns. Theoretically, they should balance out and are often unavoidable.

Systematic errors affect accuracy. These typically result from an error or bias within a sampling method. For instance, a scale may be uncalibrated and measure weights higher than they are. These values would still be precise because it measures all individuals with increased weight, though they would not be accurate. In survey studies, bias may artificially inflate certain responses. In a survey asking individuals about the amount of soda they consume in a day, it may be more likely for subjects to lower their actual consumption amount to appear healthier. Systematic errors may also result from drift when a variable measurement becomes less accurate over time. An example of this is seen when a researcher starts a study taking precise measurements but becomes fatigued as the study continues.

How to Reduce The Errors

Fortunately, there are multiple ways to reduce errors. In random or personal errors, errors may be reduced by:

Systematic errors can be reduced by:

Populations are entire groups of individuals while samples are subsets of populations used to answer scientific questions. In order to determine whether a sample accurately represents a population, researchers investigate precision (how close measured values are to each other) and accuracy (how close values are to the true population value). Precision can be measured by assessing a sample's standard deviation or spread of responses. If the standard deviation is high (meaning measurements are very different from each other) precision is low. Accuracy can be measured with percent error which determines the percentage of error between the sample's measured observation and the true measure of the population. If the measurement is far from the true value of the population, the percent error is high and the accuracy is low.

Random errors are those that lower precision. They may be positive or negative and thus may cancel each other out over time or with large data sets. They also may occur for unknown reasons and thus may be unavoidable. Examples of random (or personal) errors include the natural variation in a population or the variation in the skill needed to capture a measurement. Systematic errors result in decreased accuracy. They may result from bias in survey responses, drift in researcher measurement quality, or uncalibrated equipment. Good data should be both accurate and precise.

What are some examples of accuracy?

Accuracy is the distance of a measured value to the true value. When throwing darts, hitting a bullseye is accurate while hitting an outer ring is not accurate.

What is accuracy and precision in measurement?

What is an example of low accuracy and high precision?

Low accuracy occurs when a value is far from the true value and high precision occurs when measured values are close together. If a scale was not calibrated it may show values that are higher than the actual weight of an object (and not accurate), but multiple measurements may return the same weight (and thus be precise).

Accuracy vs. Precision in Chemistry

Free Fall Equation & Examples | What is Free Fall in Physics?

How to Read & Write Decimals to the Hundredths Place: Lesson for Kids

Using Trigonometry to Work With Vectors