When fruit is dehydrated, water is removed from the fruit. When organic compounds are dehydrated, water is also removed from the compound. Typically dehydration of organic compounds is done with alcohols as the starting material, and it proceeds as an acid-catalyzed dehydration. It is acid-catalyzed, because the acid is reformed at the end of the reaction, meaning that none of it is used up during the reaction. Acid-catalyzed dehydration of alcohols occurs when an acid puts an extra hydrogen atom on the alcohol. This changes the OH alcohol group into an {eq}H_2O {/eq}, or water, group attached to the organic compound. When that molecule leaves, it leaves as water - thus dehydration occurs.

The Reaction of Alcohol Dehydration 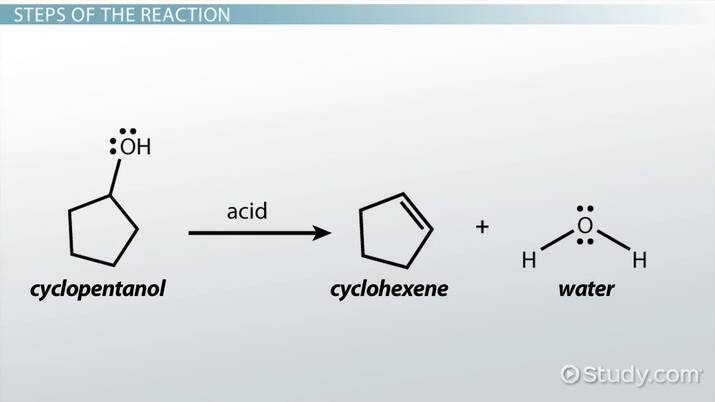 Try it now
Back
Coming up next: Acid-Catalyzed Ester Hydrolysis: Procedure & Mechanism

The Mechanism for Secondary and Tertiary Alcohol Dehydration

The dehydration of alcohol mechanism, for secondary and tertiary alcohols, follows an E1 mechanism. This mechanism, as with all dehydration of alcohol mechanisms, starts with the protonation of the OH group by the acid catalyst. Then the E1 part of the reaction occurs in two steps, with the first step (second step of the overall reaction) having the water leave, leaving behind a carbocation intermediate. In the second step (third step of the overall reaction) the conjugate base of the acid catalyst removes a hydrogen, and the alkene forms; then the acid is reformed.

Secondary and tertiary alcohols include compounds such as:

In Step 1, the alcohol is protonated, forming a water group. The alcohol can be protonated with any strong acid, which includes:

In Step 2 (which is the same as Step 1 in an E1 reaction), water leaves the organic compound, leaving behind a carbocation. This step is the rate-limiting step in the reaction, and it is the slowest step to occur. Water is a very good leaving group, and can exist easily on its own. However, carbon does not like to hold a positive charge, so it holds onto that water for as long as it can.

In Step 3 (or Step 2 in an E2 reaction), a hydrogen atom is removed from a neighboring carbon atom and forms an alkene. The conjugate base, in this case water, removed the hydrogen. Water isn't usually a good base and would not be able to remove a hydrogen on a regular hydrocarbon. However, the carbocation is very unstable, and makes the hydrogen much easier to remove. So even a weak base, such as water, is able to remove the hydrogen.

The Mechanism for Primary Alcohol Dehydration

The mechanism for primary alcohol dehydration occurs in a different manner from secondary and tertiary alcohol dehydration because a primary carbocation is very unstable. Since the E1 mechanism used for secondary and tertiary alcohols relies on a carbocation intermediate, a primary alcohol cannot follow the E1 mechanism. Instead, it follows an E2 mechanism. In an E2 mechanism, Steps 1 and 2 of the E1 mechanism (Steps 2 and 3 of the dehydration reaction) occur in a single, concerted step. A concerted step means that more than one thing happens at the same time. While these reactions will often be discussed as though one thing happens and then something else happens, everything actually happens at the same time.

In Step 2, the conjugate base of the acid catalyst removes the hydrogen at the same time that the water is kicked off. This reforms the acid and creates an alkene functional group:

Acid-catalyzed dehydration of alcohols occurs when an acid protonates the alcohol, creating water as a good leaving group. When water leaves a molecule, this is called a dehydration reaction. Dehydration of alcohols results in the formation of an alkene (double bond). This mechanism proceeds differently depending on if the alcohol is a primary alcohol or a secondary/tertiary alcohol. For both reactions, the first step is protonation of the alcohol, where the acid gives a hydrogen ion to the alcohol, forming water. The type of alcohol then determines the process that follows. Primary alcohols follow an E2 reaction, where a single concerted step removes the hydrogen, forms the alkene, and kicks off the water.

Both are dehydration reactions because water is lost from the original molecule.

How does the acid catalyst facilitate alcohol dehydration?

The acid catalyst facilitates alcohol hydration by protonating the alcohol. This forms H2O, or water, which is an excellent leaving group.

What is the mechanism for the dehydration of an alcohol to an alkene?

What is acid-catalyzed dehydration?

Acid-catalyzed dehydration is when water is removed from a molecule (dehydration). It is acid-catalyzed when an acid protonates the alcohol, but the acid is reformed by the end of the reaction.

Acetanilide Structure & Formula | What is Acetanilide?

Acetanilide Structure & Formula | What is Acetanilide?