Affective events theory (AET) is a psychological model created to explain the connections between emotions and feelings in the workplace. This model explains connections between job performance, behavior, and job satisfaction. AET underlays the fact that humans are emotional creatures, and thus behaviors can be connected to those emotions. Howard Weiss and Russell Cropanzano developed this model in 1996. This theoretical orientation is often used in industrial and organizational (I/O) psychology.

An affective state can be defined as the experience of feeling the underlying emotional state. In simpler terms, a person who is controlled by a specific feeling. For example, a person who makes a mistake on a test and then realizes it afterward might be rendered into an affective state where they cannot focus on anything else besides being upset about that mistake on the test. AET centralizes around workers being impacted emotionally by events that occur on the job; therefore, emotions affect overall satisfaction and performance.

There are many parts of the job that might affect emotions such as job pressures, tasks, management styles, and/or coworkers' actions. In AET, emotions are critically important to how employees handle workplace situations. For example, if one has a manager who is always yelling, that employee is likely to be always on edge and have an emotional response to that yelling. This would in turn make it difficult for that employee to effectively do their job, thus resulting in poor job performance. Managers or supervisors will need to be able to address major and minor issues at the time, so employees' emotions do not get affected to the point where it becomes difficult for them to do their jobs. 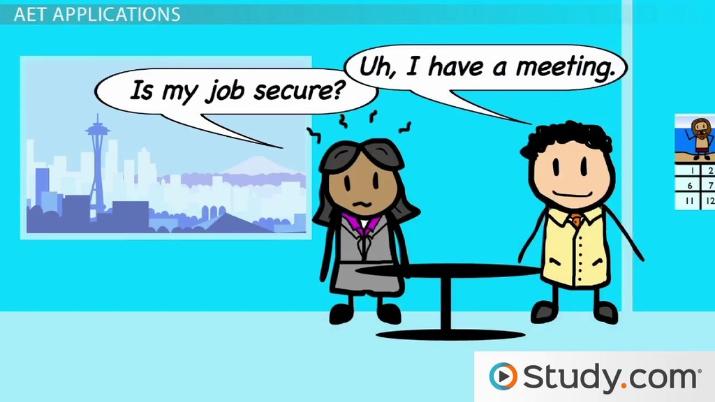 Coming up next: Emotional Intelligence in the Workplace: Definition & Meaning

According to AET, there are two types of work events that can happen: positive or negative events. These two events are equally as important for managers, owners, and supervisors to understand as to equate it with satisfaction and performance.

For example, Jessica's supervisor is always hassling her about her work. Her boss makes comments about her doing better and yelling at her about submitting work. These events are considered negative applications. Jessica, in turn, does not want to do better because she is experiencing negative emotions toward not only her boss but the job in general.

Positive applications of AET, such as uplifting emotions, can positively affect employees. For example, a boss who is always uplifting and rewarding to all employees is likely to have employees who want to do better and be better at the job. Those employees are likely to have high job performance and job satisfaction. Managers or bosses who provide opportunities for enrichment and the development of new skills related to that job are often likely to induce positive affective states. That increase can help satisfaction and performance.

Having a boss or manager understand AET is important. Given the background of AET and how it can affect a person's job output, satisfaction, and performance should be of utmost importance. Gaining trust and regulating affective events at the workplace can create workplace culture. Building and cultivating this safe space where one can build onto this culture allows management to employ happy, safe, and respected employees. When a manager understands this, that manager is likely having employees who want to work for them and want to do their best work.

Affective events theory (AET) is a theory proposed by Howard Weiss and Russell Cropanzano in 1996. This theory's centralized proposed point was that connections can be made between emotions and behaviors regarding job performance, satisfaction, and behavior. An affective state is the experience of an underlying emotional state. Workers being impacted emotionally by specific events on the job can affect performance. Job tasks, pressures, management styles, and coworkers' actions are likely to affect employees' emotions. Even the smallest issue needs to be addressed in the workplace for the employees to not be affected emotionally. These emotions are extremely important in how employees handle workplace situations. It can be said that if a person has a boss who is always on edge and taking it out on their employees, then those employees are likely to feel that hostility thus making it harder for that employee to do their job.

What is affective events theory and what are its applications?

Who proposed the affective events theory?

Affective events theory (AET) was proposed in 1996 by Howard Weiss and Russell Cropanzano. This theory is often used in I/O psychology (industrial and organizational).

What is the central point of affective events theory?

The central point in affective events theory (AET) is that workers are impacted emotionally by events or occurrences that happen on the job. This would mean those events have an effect on overall job performance and satisfaction.

How Teams Differ in a Global Setting

Generational Values in the Workplace: Differences and Dominant Values