Africa is a vast and unique continent. Second in size to Asia, Africa is 11,724,000 square miles in size, and, in addition to its mainland, includes many small island nations. Madagascar is the largest of the island nations, followed by the much smaller nations of the Seychelles, Socotra, the Comoros, Mauritius, Reunion, Ascension, St. Helena, Tristan da Cunha, Cape Verde, the Bijagos Islands, São Tomé and Príncipe, the Azores, Madeira, and the Canary Islands.

Where Is Africa Located?

Africa is located south of Europe and southwest of the Middle East. The continent is surrounded by water bodies on all sides. The Mediterranean Sea to the north, the Suez Canal and the Red Sea to the northeast, the Indian Ocean to the east, and the Atlantic Ocean to the west. Uniquely, the African continent lies within all four hemispheres. With this continental placement, latitude has a large role in determining the physical geography of Africa. Latitude is the distance a location is either north or south of the equator.

Africa's physical geography and proximity to water on all sides have greatly impacted the cultural and social development of the continent over time. Physical geography helps to determine what resources are available and how the movement of goods, people, and ideas can flow.

The Swahili Coast is an example of influential geography. The Swahili Coast is a swath of land on the east coast of Africa. It spans the coast of the countries of Kenya, Tanzania, Mozambique, and the Comoros. The Swahili Coast has clear access to the Middle East, Asia, and Oceania by boat, as well as the shortest path inland, east to west across Africa. With resources and access, it became an established trading zone and cultural exchange in the 8th century, when the African and Arab traders and travelers intermixed enough to name the area in their shared language. Swahili is both the name of the language spoken and means "people of the coast." 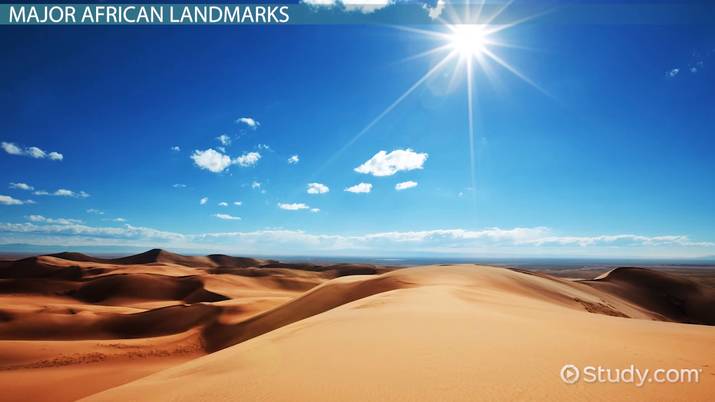 Try it now
Back
Coming up next: Africa's Environments: Zones & Agricultural Adaptation

Africa is home to many remarkable geographical features, including rivers, mountains, and deserts.

Using latitude as the guide from north to south, the geography of Africa's landscapes will be described. The equator, which is zero degrees latitude, runs east to west around the world like a belt. The equator bisects the continent of Africa almost directly in half, which makes much of the northern half of Africa geographically reflect the lower half.

Starting at the northernmost coast of the African continent is the Mediterranean Sea. The northernmost part of Africa enjoys a Mediterranean climate, with hot and dry summers and cool and dry winters. This has long been an area of much human activity, as a meeting point between Europe, Africa, and the Middle East.

Moving South to the Sahara Desert, the largest hot weather desert in the world dominates the region of North Africa. On the northern side of East Africa, a piece of land juts out into the Indian Ocean, creating the southern border for the Gulf of Aden, which is south of Yemen. The Horn of Africa's physical geography is unique, as it is the transition zone between the Sahara Desert and the highlands of East Africa.

South of the Sahara Desert is the Sahel region, which is also known as the African Transition Zone. The Sahel is a transitional zone of grassland and scrub between the desert in the north and the tropical rainforests in the south. The Sahel cuts nearly straight across the continent from west to east, then makes a distinct drop south, distinguishing the highland region of the Horn of Africa.

Beginning in this region and southward is where the unique and well-loved animal species of Africa slowly start to be located. The central African rainforest region is the second-largest rainforest area in the world. Ending the geographical tour of the African continent southward are the southern grasslands, which are flanked by the small Namib and Kalahari deserts, and capped at the southern tip with a modified Mediterranean climate of dry summers and cool winters.

The following sections describe five interesting facts about the geography of Africa.

The African Great Lakes are composed of five large lakes and a number of small ones. The large lakes are Victoria, Malawi, Tanganyika, Turkana, and Albert. The smaller lakes are Edward, Kivu, Mweru, and Rukwa. They hold approximately 27% of the world's fresh water. This is a significant resource for the region of East Africa, as well as the world.

Harmattan winds are seasonal hot, dry winds that blow off the western Sahara from late November to mid-March. These winds are known to carry large amounts of Saharan dust and particulate matter hundreds of miles across the Sahel region and out over the Atlantic Ocean. The dust from these Harmattan winds is in quantities large enough to interfere with aircraft operations and settle on ships, thus carrying Saharan dust around the world.

Meeting Point of the Indian and Atlantic Oceans

At the southern tip of Africa, the Indian and Atlantic Oceans meet. The exact point where they meet is disputed, but it is somewhere between Cape Point, the Cape of Good Hope, and Cape Agulhas; all closely located in South Africa. The ocean's meeting is significant because the cold currents of the Atlantic mix with the warm currents of the Indian, creating a unique intersection of underwater environments for sealife. Whale watching of the South Right, Humpback, Bryde's, and Killer whales species is especially common.

Madagascar is both a sovereign nation and the fourth largest island on the planet. Due to its isolated location, it is well known for numerous endemic species. Endemic species are flora and fauna that only live in one location. Species unique to Madagascar include the lemur, baobab trees, and half the world's species of chameleons. Contrary to the popular Disney movie about Madagascar, it does not have the large mammals of Africa, such as lions, giraffes, or elephants.

Africa is the second-largest continent. It is surrounded by multiple bodies of water, including the Indian Ocean, Atlantic Ocean, and the Mediterranean Sea. The main regions are North Africa and Sub-Saharan Africa.

Further regional and physical geography divisions can be divided using latitude, particularly with the equator hugging the center of the continent. Africa is home to many incredibly unique geographic features, including the Nile River, the longest river in the world; Mount Kilimanjaro, the tallest mountain in Africa; Victoria Falls, the widest waterfall in Africa; Lake Victoria, the largest lake in Africa and the largest tropical lake in the world; and the Sahara Desert, the largest hot desert on the planet, which receives 90% of the daytime sun.

What is the highest physical feature in Africa?

Mount Kilimanjaro is the highest mountain in Africa. It sits at 19,341 feet in the country of Tanzania, and is also a dormant volcano.

How does geography affect Africa?

Geography is key to understanding the physical landscape of Africa. Because the equator nearly bisects the continent in half, there is a pattern of where the deserts, grasslands, and forest regions will be.

What are the main physical features of Africa?

The dominant physical features of Africa are the Nile River, Mount Kilimanjaro, Victoria Falls, Lake Victoria, and the Sahara Desert. The Nile River is the longest river on the planet. The highest mountain peak in Africa is Mount Kilimanjaro. Victoria Falls is known for being the largest waterfall. Lake Victoria is the largest of all lakes in Africa. The largest hot desert in the world is the Sahara.

The Economies of Africa & the Middle East

Mergers & Acquisitions: Types & Examples | What is a Merger?

Africa Countries, Regions & Map | How Many Countries are in Africa?

The Economies of Africa & the Middle East

Mergers & Acquisitions: Types & Examples | What is a Merger?

Africa Countries, Regions & Map | How Many Countries are in Africa?