Andrea Taktak, Bridgett Payseur
Understand what agglutinin is by learning the agglutinin definition. Also, learn what agglutinogens are and understand how they are different from agglutinins. Updated: 03/10/2022

The body's immune system does a fabulous job of picking up on cells or toxins that are not supposed to be present. Part of the immune response uses agglutinin to rid the body of unwanted cells, such as pathogenic bacteria, viruses, fungi, or other invaders in a process called agglutination. What is agglutinin? Agglutinin is a special kind of antibody that binds foreign cells together, forming a clump. The process of forming the clump is called agglutination. Other antibodies then bind to the clumped foreign matter in the blood and mark it for destruction.

Function and Working of Agglutinin

Agglutination is the part of an immune response that tags or marks the grouped cells and makes them an easy target. For agglutination to occur, the body must discover a pathogen or foreign material. An agglutinin (a special antibody) will specifically bind to the outer proteins of the foreign substance, causing the cells to stick together. 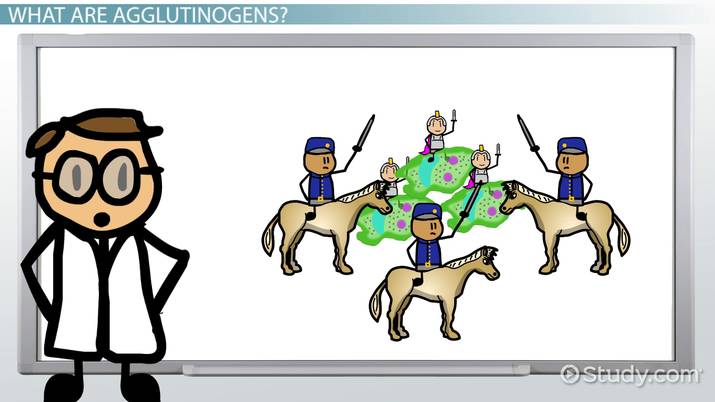 Try it now
Back
Coming up next: Digestive System I: The Upper Gastrointestinal Tract

In the early 1900s, a scientist named Karl Landsteiner developed a blood typing test after several patients that received blood transplants died, and it was observed that the deceased patients' blood had agglutinated. Landsteiner discovered that there are four blood groups.

If a person with type A blood were to receive type B donor blood, the B agglutinins (antibodies) present in the blood plasma would bind to the B agglutinogens (antigens) on the surface of the cells, causing agglutination. To conduct a blood typing test, a drop of blood can be mixed with A and B agglutinins to look for clumping. These agglutinins are typically labeled as anti-A and anti-B. If a blood drop is mixed with anti-A serum and agglutination occurs, the blood type will be A. This is because the red blood cells have A agglutinogens (antigens) on the surface of the cells that have clumped with the anti-A agglutinins.

A second blood cell agglutinogen, called the Rhesus factor (Rh factor), is present on about half of human blood cells. If this agglutinogen is present, a person is said to be positive. If it is not present, the person is said to be negative. People that are negative for the Rh factor will sometimes have agglutinins in the blood plasma; therefore, agglutination may occur if an Rh-negative individual receives blood from an Rh-positive donor.

It is important to know a person's blood type for blood transfusions, but it is also important during pregnancies and organ transplants. During pregnancy, a mother may have an Rh-negative blood type, but the baby could be Rh-positive. At delivery, the blood of the mother and baby can mix, causing the mother to make Rh agglutinins if she doesn't already have them from previous exposure to Rh-positive blood. During a second pregnancy, if this same mother carried another Rh-positive baby, the mother's Rh agglutinins would bind to the Rh agglutinogens on the baby's blood cells, which could cause agglutination and death for the fetus. Thankfully, there is a shot called RhoGAM that prevents the mixing of blood types.

Organ transplants also require a careful review of the panel of proteins found on the donor organ cells. A large percentage of the agglutinogens on the surface need to match those of the person needing the transplant. If there is not a close enough match, the agglutinins of the body will not recognize the donated organ tissue as "self" and will attach themselves to the tissue, causing agglutination and rejection. A person receiving an organ transplant is given immunosuppressant drugs to help prevent an immune response. These drugs typically need to be taken for the rest of the patient's life.

Cold agglutinin disease, or CAD, is a rare auto-immune disease that affects red blood cells. Red blood cells are needed for the delivery of oxygen to all of the cells of the body. A person with CAD must avoid cold temperatures because exposure below 39 degrees F (3 degrees C) can cause agglutinins to attach to the red blood cells and mark them for destruction. If too many red blood cells are destroyed, insufficient amounts of oxygen will be delivered to the cells. The loss of red blood cells can cause a lack of color to the skin as well as a substantial loss of energy. Treatment for CAD involves prevention first by avoiding cold temperatures. If the disease becomes too severe, immunosuppressant drugs can be used to quell the number of agglutinins that are produced.

An agglutinin is a special protein in a person's blood that causes clumping when it encounters foreign materials. A foreign substance in the body will have specific protein markers known as agglutinogens. When agglutinins bind to agglutinogens, a process called agglutination occurs. Agglutination is the immune response that causes clumping of the antibodies that are bound to the foreign cells, easing their removal. The interaction of agglutinogens and agglutinins can also cause rejection during pregnancy or organ transplants. If a mother were Rh+ and the baby she carried was also Rh+, there would be no issue. If the mother were Rh- with Rh antibodies, the mother's agglutinins would attack the fetus. A special injection called RhoGAM can be given to prevent this from occurring. Organ transplant recipients require a lifetime of immunosuppressant drugs to hinder agglutinins binding to the foreign agglutinogens of the donor organ.

Agglutination is the primary way to determine blood type. Blood type can be found if an antibody serum of a specific type (either A or B) is mixed with the patient's blood. For example, if blood is mixed with anti-A serum and agglutination occurs, that blood is labeled type A blood. Type A blood will have A agglutinogens on the surface of the red blood cells that agglutinate with the A antibodies of the serum.

What is an agglutinin or agglutinogen?

What is cold agglutinin disease?

Cold agglutinin disease (CAD) is a rare autoimmune disease. With this disease, a person that is exposed to cold temperatures (below 39 degrees) will experience an immune response that attacks the body's own red blood cells.

What are examples of agglutinins?

Basophil Function, Characteristics & Structure | What is a Basophil Cell?