Western Classical music, especially music composed during the Classical Era (1730-1820 A.D.), is often structured around recognizable and predictable patterns. There is one musical composition pattern that one composer, Domenico Alberti, used so frequently that it became his namesake.

Alberti Bass is a three-note arpeggio pattern, usually found in the left-hand section or bass voice of a keyboard composition. Alberti Bass is an arpeggiated element in which a performer plays a chord's notes in succession rather than all at once. Sometimes this is referred to as a broken chord. Alberti Bass is most strongly associated with keyboard music composed during the Classical Era and continued to be a common composition element through the 18th and 19th centuries. Although Domenico Alberti popularized this pattern, it was also frequently heard in piano sonatas by the most famous composers of the style period, like Mozart, Haydn, and Beethoven.

The pattern itself is simple. Although the Alberti Bass definition describes an arpeggio, the order of notes is crucial since not all arpeggios would be considered an Alberti bass pattern. It is also defined by a forward-moving rhythm, characteristic of most Alberti Bass examples. An arpeggio is an Alberti bass only if the notes are in a chordal pattern, in a specific order, and rhythmic pattern.

Origin of the Alberti Bass

Domenico Alberti holds the honor of popularizing Alberti Bass, but he is not historically considered the inventor of the pattern. Alberti Bass evolved from its predecessor bass line element, Basso Continuo. Basso Continuo of the Baroque Era (1600-1750) was a common practice of notating the bass note of a chord only and allowing the performer to fill in the rest of the harmonies in an improvisational style. Unlike Alberti Bass, the composer would not explicitly write out the notes in a Basso Continuo chord. Performers were free to play the additional notes of the chord in any order and add filler notes for additional texture and harmonic intrigue.

Often considered a ''pre-classical'' composer, Domenico Alberti was a bridge between Basso Continuo and Alberti Bass. His collection of harpsichord sonatas featured the pattern to such an extent that he became known for the sound and influenced 17th-century composers to continue to develop its practical applications.

This type of harmonic expression was quite popular, and Alberti Bass reached its peak during the 1800s. Once the modern piano was invented and became the dominant keyboard instrument among Classical composers, Alberti Bass slowly fell out of fashion. Because the piano could sustain pitches, notes could resonate for much longer than earlier keyboard instruments. The need for active harmony and moving patterns like the Alberti Bass no longer dictated how composers structured bass lines and harmonic accompaniment. Despite this, Alberti Bass continued to be used less frequently as a stylistic element among 19th and 20th-century composers. 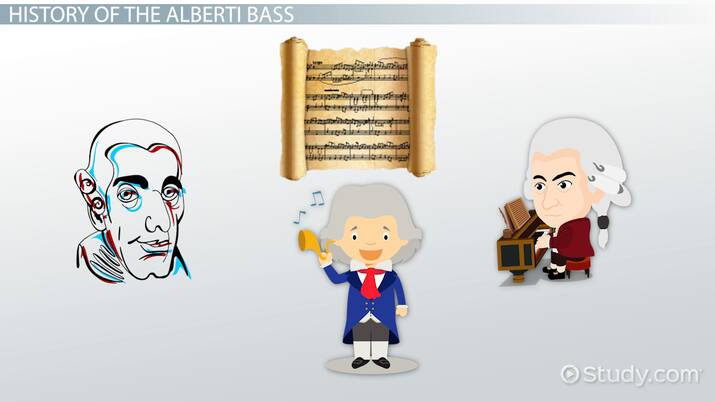 Coming up next: Ostinato: Definition & Examples

How to Use the Alberti Bass

Early keyboard instruments like the harpsichord and the fortepiano lacked the resonance and sound of the modern piano; they needed an active harmony to fill in much-needed sounds. Alberti Bass created a more expressive harmonic background for the melody since individual pitches within a block chord could not be sustained for long. Arpeggiating the notes instead allowed the listener to hear the harmonies more fully.

In homophonic textures where there is a melody line and bass line harmony, Alberti Bass was used as a harmonic accompaniment to the melody line. Written for the left hand, Alberti Bass was meant to give the piece a forward-moving, harmonically-dynamic sonic quality. Because of this, Alberti Bass was most often written in a steady eighth note or sixteenth note pattern. These rhythms were quick, which allowed composers to fully express the four-note I-V-III-V chord pattern within one or two evenly distributed beats.

The sixteenth note Alberti Bass pattern was popular among composers like Mozart, who enjoyed writing music with energy and drive. With this particular rhythmic pattern, the listener could fully realize each note in the chord within the space of one single beat. By using Alberti Bass this way, composers could create compositions that sound much more harmonically rich while, in reality, only using a few chords throughout.

Alberti Bass examples are extremely abundant in the Classical keyboard repertoire, especially in the Classical piano sonatas of the 18th century. It is important to note its continued use during the Romantic Era and among some 20th-century composers. All works featuring Alberti Bass have an underlying bass pattern in common, although all quite melodically unique. Popular historical examples of Alberti Bass in Classical Era compositions include:

Alberti Bass is a three-note musical pattern often used in the left-hand or bass voice of keyboard compositions, which was popularized by the composer Domenico Alberti. Alberti bass is an arpeggiated pattern or broken chord, meaning that the performer plays the notes of a chord played in a sequence instead of all at once. Alberti Bass plays the role of the accompaniment line to the melody of homophonic textures, in which there is a harmonizing bass line with the melody. Alberti Bass was especially popular during the 18th century and followed a specific note sequence of lowest-highest-middle-highest in the notes of the chord. For example, if a C major triad contained the notes C, E, and G (in order from lowest to highest), the Alberti Bass pattern would be C-G-E-G. The Alberti Bass pattern is often performed using an eighth note or sixteenth note rhythmic pattern, in which a performer can play the entire pattern entirely within one or two beats.

Where did Alberti bass come from?

Alberti Bass evolved from earlier accompaniment styles and patterns such as Basso Continuo, where composers would provide the bass note of a chord and performers would fill in the necessary harmonies. The composer, Domenico Alberti, bridged the two styles, popularizing the practice of Alberti Bass to the point of it becoming his namesake.

How do you use Alberti bass?

Because of the way Alberti Bass patterns to outline all the notes within a particular harmony, is it most often used as the accompaniment voice to the melody line. Since each note of the chord is played separately in a sequence, the listener is able to hear the harmonies more clearly in a forward-moving, active style.

What does Alberti bass mean?

What is the pattern for Alberti bass?

The Alberti Bass pattern is a four-note arpeggiated pattern. This means that notes of a chord, most often a three-note triad chord, are played separately. Specifically, in Alberti Bass, the order of notes is played as lowest-highest-middle-highest, wherein the lowest note is the bass note of the chord. For example, a C major chord containing C, E, and G would be performed as C-G-E-G.