What is Algor Mortis?

Algor mortis is the second stage of early and noticeable changes that occur during the first 24 to 48 hours after death. Death is the cessation of life which is defined as the irreversible end of blood circulation throughout the body, or the end of brain activity.

The term algor mortis is Latin for "cold death" and refers to the change in the temperature of the body until it matches the ambient temperature. While this usually means cooling, bodies in an environment hotter than normal body temperature will increase in temperature. This change is approximately 1.5 to 2 degrees Celsius for the first hour and drops a rate of around one degree Celsius for each hour after that. 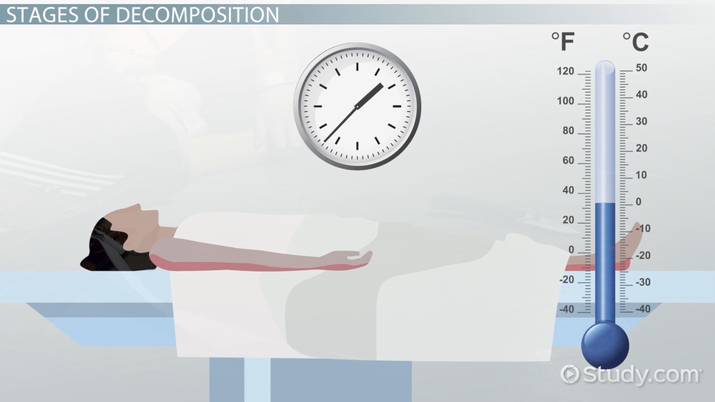 There are key stages of early decomposition that occur during the first 24 to 48 hours of death. The stages of death mortis are:

Livor mortis is defined as the first stage after death. It means "discoloration of death" or "wound of death" in Latin. Liver mortis occurs within 20 to 30 minutes after death and lasts for the first 12 hours. It is the change in body color caused by blood flowing to the lowest points of the body due to gravity pulling it down. This makes the underside darker and the upper side of the body paler. The hemoglobin within the blood turns purple because it is pooling. Liver mortis can aid in helping a criminal investigator determine if the body has been moved from the time that it died due to the pooling affect.

Algor mortis is defined as the second stage after death. It starts approximately 30 minutes after death and can continue for the first 48 hours, but typically is complete by 18 to 20 hours after death, unless the body is in an extreme environment. It is caused when the body's thermoregulatory structures and systems stop.

Rigor mortis is the third stage of early decomposition. It roughly translates from Latin as "stiffness of death." This is the stage in which the body stiffens as a result of muscle contractions. Rigor mortis can set in anywhere from one to six hours after death. The average time it takes is usually between two to four hours after death. It can last up to 24 hours before the muscles stop their contractions.

Formula to Determine Time of Death

The Glaister equation is used to determine the time of death based on the temperature of the body at the time of discovery or testing.

The T is equal to the temperature measurement of the body. The time is the number of hours the person has been dead.

If the ambient temperature is less than or equal to 32 degrees C, then the equation is:

The T is still equal to the temperature of the body in this equation, and the time is the number of hours the person has been dead.

How Readings are Taken

There are a variety of conditions that can affect the use of algor mortis and the Glaister equation when determining time of death. One of the most significant is time. After a few hours most temperature readings are not considered accurate. The other conditions that affect using algor mortis to determine death include:

In summary we have learned all about the second stage of death. There are three stages of early and noticeable changes that occur after a person dies. These stages are:

They are typically finished by 48 hours after death. We learned that algor mortis is the second stage of death, and that it is known as the "cold death." It is the time when the body temperature equilibrates to the temperature of the surrounding environment. Algor mortis can be used as a determiner for time of death as long as the person died within the last 24 hours of being found. The Glaister equation is what medical examiners use to calculate time of death based upon the Algor equation if the person is not in a medical facility upon time of death. There are a variety of factors that can make this time of death inaccurate, which include body mass index, temperature, and age. Finally, we have learned that the Algor mortis stage of death can help aid in criminal investigations by determining the time of death in murder victims.

What are the 3 types of mortis?

The three types of mortis are livor mortis, algor mortis, and rigor mortis. They all occur within 48 hours after death.

How does Algor mortis determine time of death?

Algor mortis can determine the time of death because it is based on the equilibrium between the body's temperature and the surroundings. The rate of cooling is known to be either 1.5 degrees per hour if the environment is above 32 degrees C, or 0.75 degrees per hour if it is 32 degrees C or below. The Glaister equation is used to calculate the hours since death.

What happens during Algor mortis?

What does Algor mortis mean?

In Latin Algor mortis means "cold death." It is the second stage of changes that occur after death as the body's temperature reaches the temperature of its surroundings.

Pallor Mortis & Algor Mortis | What Happens When We Die?

Autopsy Procedure & Results | What is an Autopsy?