What is an Alpha Helix?

An alpha helix is a secondary structure in proteins where the polypeptide chain is curved like a spiral. Proteins are an important part of living things. Inside cells, proteins make up enzymes, which catalyze chemical reactions. They also form structures, transport materials and help with cell motility, cell division, and more. Proteins are able to do a diverse array of jobs inside the cell due to their unique three-dimensional structure. The structure of a protein is determined by its amino acid sequence. Proteins are made of long strands of amino acids called polypeptide chains. The way the polypeptide chains folds and allows amino acids to interact with each other creates the three-dimensional structure necessary for their function. 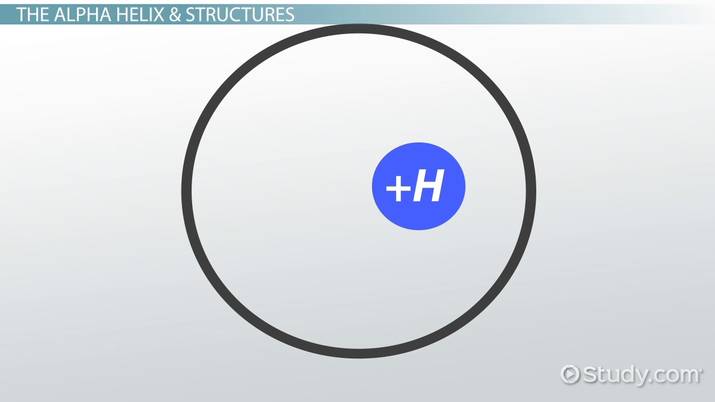 Try it now
Back
Coming up next: What is Amino Acid Residue?

To understand how alpha helices are formed, first the structure of amino acids must be understood. Amino acids are made of a central carbon atom bonded to a carbonyl group on one side, an amino group on the opposite side, a hydrogen atom and a side chain that is variable. In alpha helices the carbonyl group hydrogen bonds to the amino group of the amino acid that is four away from it. This creates a tight spiral pattern that forms the alpha helix. The side chains of the amino acids extend outward from the helix, allowing them to interact and help produce further structures in the protein.

The alpha helix secondary structure is one of four layers of structure in proteins. The levels of protein structure include:

Proline is an amino acid that tends to disrupt alpha helices. Proline has unique side chain that forms a ring structure with the amino group of its amino acid. This prevents the amino group from creating the hydrogen bonding needed to form an alpha helix. Typically proline is found as a break between different forms of secondary structures as its side chain is too large to be accommodated in alpha helices.

Hemoglobin (more than 70% alpha helix) has four regions where the oxygen binds and releases. The hemoglobin shape changes with the oxygen phases. The shape of protein also changes slightly due to individual differences.

1.The shape of hemoglobin is what kind of structure? (a) primary (b) secondary (c) tertiary (d) quaternary

2.The three dimensional shape of the protein is determined mainly by what?

3.The main kinds of secondary structure are?

4.Amino acids that are not likely to form an alpha helix are?

(a) proline and glycine (b) alanine (c) leucine

5.A helix propensity scale, based on experimental evidence of the frequency of certain amino acids in alpha helices, finds that the three highest amino acids are?

6.The COOH from one amino acid and the NHH of another amino acid form what?

In this section of the carbon backbone of the amino acid chain, -N-C-C-N-C-C- , the first C on the left and the second C from the right have residues (side-chains) attached to them.

7.The carbon atom with the residue is called what?

These residues are twenty different side-chains that distinguish one amino acid from another. These side chains can rotate about the C(alpha)-C bond and have many conformations.

8.The different rotational positions of the residues are called what?

9.This is represented graphically as?

What is alpha helix structure?

An alpha helix structure is a type of secondary structure in a protein. In an alpha helix the polypeptide chain twists like a spiral via hydrogen bonding between the amino acids.

How is an alpha helix held together?

An alpha helix is held together with hydrogen bonds. These bonds form between the amino group of one amino acid and the carbonyl group of another located about 4 amino acids away. This forms a twisted, helical structure.

Which amino acids are found in alpha helix?

What level of protein structure is alpha helix?

Glycine Structure, Formula & Neurotransmitter | What Does Glycine Do?

Glycine Structure, Formula & Neurotransmitter | What Does Glycine Do?