Copyright
Janelle Barowski, Sarah Spitzig, Kaitlyn Danahy
Explore analogy examples in literature by learning the definition. Learn about rhetorical analogy and figurative analogy through the use of examples. Updated: 01/17/2022

What is Analogy in Literature?

An analogy is a literary device that is popularly used in literature to aid an author in establishing the point they are trying to make. A literary device is used by the author to add meaning and imagery to writing. This style of writing helps add depth to the literature. This added layer of meaning can help students and academics analyze the author's intentions. Other literary devices include alliteration, imagery, metaphors, and similes.

An analogy is a commonly used literary device. The definition of analogy is a comparison between two known things to create an understanding of a new concept in literature. An analogy will establish a relationship between two concepts that are parallel. It works to introduce how concepts are related by identifying a common thread. This aids the reader in understanding what the author is trying to prove in their argument.

The more effective way to understand analogies is through the use of an example. Simple analogies have a distinct, identifiable format that they are written in. The following is an example of the format of a simple analogy: A is to B as C is to D. Here is an example with those terms filled in: 'An apple is to fruit as a cat is to an animal.'

A complex analogy does not follow the classic framework that is used for a simple analogy. The language used may be more figurative and imagery may be used. In this case, the relationship the author is trying to convey may be less obvious to the reader. The following analogy is considered complex: 'Life is like a box of unmarked chocolates.' In this complex analogy, the author is alluding to the fact that life is unpredictable. 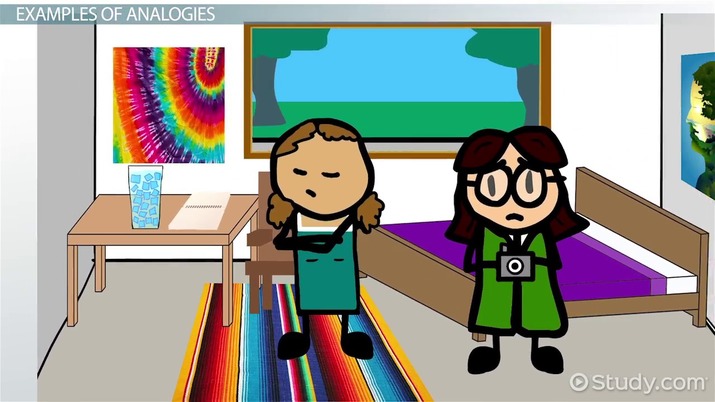 Coming up next: Aporia: Definition & Examples

Importance of Analogy in Literature

In literature, an analogy is a literary device that is used by the author to create connections between parallel concepts. It aids in informing the reader about the relation between two ideas. Analogies can help make abstract ideas more concrete by offering tangible comparisons. This helps the reader understand what the author is trying to convey.

Note the following analogy: 'Raising children requires the same dedication you would give to a garden. Nurture them, feed them, introduce them to both light and dark, and have patience; and soon you will see them grow into blooming wonders.'

In this analogy, the author is comparing an abstract concept, raising children, to a well-known, tangible concept, gardening. Therefore, the reader can grasp the necessary tasks of child-rearing because of the correlation that is being drawn to raising a garden. Analogies can make hard-to-grasp concepts easier to understand.

For these reasons, analogies can prove to be a useful tool in persuasive arguments. Analogies can be utilized effectively within various genres of literature. The analogy comes from the Greek language and means 'proportionately.' In ancient Greece, academics would use analogies to help prove their points. They can be used to draw a connection between ideas, making an argument clear to the reader.

There are two different types of analogies. They include literal analogies and figurative analogies. The subsequent sections will dive deeper into the definitions of each, including examples.

The first type of analogy is a literal analogy. A literal analogy is used to compare two similar concepts. This can be useful in arguments of persuasion by establishing that common link. This can be seen when medications are tested on animals, such as mice and monkeys before they are approved for use on humans. Researchers are saying that these animals react to the medications and treatments the same way humans would react.

Another classic example is seen when children attempt to argue with their parents. They may state: "If Janelle can play hockey, why can't I?" The child is drawing a literal comparison between the two children to rationalize their request to also play hockey.

Literal analogies attempt to establish two concepts as being the same. This allows the person to rationalize their actions or argument. This can prove useful for persuasive arguments in academia and real-world scenarios.

An example of a figurative analogy includes: 'She is as cold as ice.' In this analogy, a person and ice have very little in common. However, this sentence is highlighting the fact that the person is not friendly or warm. Instead, she is considered to have a cold personality, similar to how ice is cold.

Another example of a figurative analogy is: 'She is a ball of fire.' The opposite of the last example, this one compares a person to fire. While these ideas have almost nothing to do with each other, this sentence is comparing a person's personality to the warmth of a fire.

In this literal analogy, Bowen is comparing memory to a saucer and the love of a cup. She is stating that memory holds on to the idea of love and keeps it in place. Similarly, a sauce holds onto the cup.

In literature, an analogy is a literary device that is used by the author to create connections between parallel concepts. A literary device is used by the author to add meaning and imagery to writing. An analogy is a comparison between two known things to create an understanding of a new concept. It aids in informing the reader about the relation between two ideas. Analogies can prove to be a useful tool in persuasive arguments.

Analogies are to Literary Devices as Theorems are to Formulas:

In this three-part activity, you will identify some complex analogies, transform others, and write your own. An answer key is below.

Read the following passage and identify the analogies (hint: there are two).

Chantrea stared at her math homework. She felt lost as she tried to understand an algebra theorem she had a test on the next day. She had never encountered a formula she couldn't understand before. Exhausted, she called her friend Kongkea, who came over to help Chantrea. Suddenly, Chantrea's eyes were opened, and she got a very good grade on her test.

Change the following complex analogies into simple analogies (warning: the last one is tricky!).

Santiago had to pick his classes for next semester, and he had to fulfill both a science and philosophy requirement. He chose chemistry and epistemology.

Zanjin's face was as blank as a wall.

What is an analogy in literature?

In literature, an analogy is a literary device that creates connections between parallel or similar concepts. It informs the reader about the relation between two concepts. Analogies can help make abstract ideas more concrete by offering comparisons.

What is an example of an analogy in literature?

The following is one of the most well known analogies in literature:

"What's in a name? That which we call a rose

By any other word would smell as sweet.

So Romeo would, were he not Romeo called"

Pun Overview & Examples | What is a Pun?

Allusion Literary Device Overview & Examples | What is an Allusion?

Analogy Types & Examples | What is an Analogy?

Consonance Overview & Examples | What is Consonance in Poetry?

Ambiguity in Literature Examples | What is Ambiguity?

Refrain in Poetry Overview & Examples | What is Refrain?