Copyright
Jennifer Carnevale, Emily Teater
The Egyptian gods' family tree is extensive. Learn about the origin of Egyptian mythology and the major and minor Egyptian gods and goddesses in mythology. Updated: 09/09/2021

Ancient Egypt encompassed a variety of gods, goddesses, and myths making Egyptian mythology multi-form. This means there are multiple variations of each mythological story. While many of the Egyptian gods and goddesses stay the same through the retellings, there are multiple narratives, which change the way people understand the ancients, especially when it comes to the origin of Egyptian mythology gods and the Egyptian goddess names.

While this lesson will provide an overview of the family trees, roles, and origins, these are only a few of the versions that are still told today. 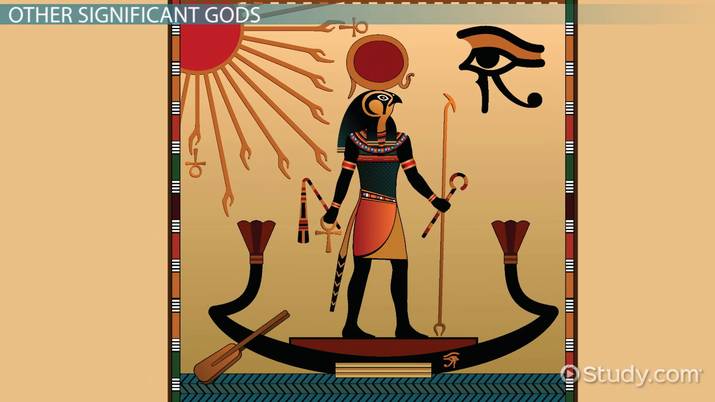 The Egyptian gods family tree is lengthy and complicated, but this breakdown can help form the foundation of how the Egyptian mythology lineage began and was passed on for generations to come, starting with the first origin story of the Egyptian gods and goddesses.

Egyptian mythology states that before the Earth, there was darkness and chaos called Nun. Sometimes depicted as a human figure, Nun was the murky waters which Atum, the creator god, would emerge. It is said that Atum, isolated and alone on the primordial hill known as the ben-ben, mated with his shadow to create his children: Shu and Tefnut. Shu was the god of air and gave the world life, and his twin sister, Tefnut, was the goddess of moisture and gave the world order.

Shu and Tefnut left their father and traveled the world to give it life and order. Atum, concerned they were away too long, removed one of his eyes and sent it to find his children. The children found the eye and returned it to their father on the ben-ben. This eye would later be known as the Eye of Ra and or the All-Seeing Eye. Filled with joy, Atum cried, and the water from his tears populated the earth with men and women.

However, this is where the multi-form mythology comes into play. While it is said Atum was the first creator, other versions of the myth suggest Ra, the sun god, was the first god of Egypt and that his tears created man. It is interesting to note that most human depictions of Nun show him holding the boat of Ra which carries the sun across the sky and back down to the underwold each night.

The Lineage of Atum's Children and the Story of Osiris

Atum, the first creator god of Egyptian mythology, bore two children: Shu and Tefnut. Shu and Tefnut also had two children: Geb and Nut. Geb was the oldest child and was deemed the god of the Earth, also becoming the first King of Egypt. His younger sister, Nut, was the goddess of the sky, said to be held up by her father and stretch across Geb.

Geb and Nut had four children: Osiris, Set, Isis, and Nephthys. Osiris became the second king of Egypt, and Isis, his sister, was his queen. However, issues within the family changed the course of history.

Isis, goddess of motherhood, magic, and healing, set out to find Osiris and disguised herself as a human. She finds the coffin, but Set steals it back. He chops Osiris into 14 pieces, so Isis can't give him a proper burial.

Isis went to her sister and Set's wife, Nephthys, the goddess of magic, mourning, healing, and service. With the help of Nephthys and her son Anubis, the god of mummification, they collect all 14 pieces of Osiris and ask Ra to bring him back to life for one night. Ra agrees, and Isis and Osiris conceive a son, Horus. The next day, Anubis mummifies Osiris, making him the first mummy in Ancient Egypt. This transition makes Osiris the god of the underworld.

It has also been said that Horus is the reincarnation of Ra, since Ra was the god who revived Horus' father for one night, therefore making Horus the god of sky, sun, and moon.

Even after Osiris' death, Set was not satisfied. When he learns about Osiris' son, Horus, he transforms into a snake and bites/poisons Horus. However, Thoth, the god of wisdom medicine, writing, and the moon, saves him. When Horus becomes an adult, he challenges Set, and they fight for many days. Eventually, a court of Egyptians rule in his favor, and Horus becomes king. Set is punished by rowing Ra's boat across the sky for all eternity.

This list of Egyptian deities covers both the major and minor Egyptian mythology names throughout ancient history.

Egyptian mythology contains a vast array of information spanning thousands of years. It is a multi-form mythology, which means there are various versions of its stories and multiple interpretations. The origin of the mythology is said to stem from Nun where Atum was created. He had two children, Shu and Tefnut who helped him create life and order on Earth. Having two kids of their own, Geb and Nut, the family tree began to bloom into the popular deities that are still known today:

There are several other major deities in the pantheon of Egyptian mythology including Ra the god of the sun, and there are also many minor deities who were said to support the major players and help citizens in times of need. Today, some of these deities are still worshipped and revered making connections back to these ancient mythologies.

Who are the main Egyptian goddesses?

What is the family tree of the Egyptian gods?

Who are the most powerful Egyptian gods?

The most powerful Egyptian gods are Ra, the sun god, Osiris, the god of the underworld, Atum, the first creator, Anubis, the god of mummification, and Thoth, the god of wisdom, writing, medicine, and healing.

Who is the most powerful Egyptian goddess?

While there is contention about who is the most powerful goddess in Egyptian mythology, most believe the title would go to Isis, as she is the most well-known and known to encompass the ability of several gods and goddesses throughout history.