What? causes these errors in meiosis to occur that lead to aneuploidy? Some are caused by substances known as aneugens. Aneugens are agents that are capable of interfering with the normal function of cell division by causing the spindle fibers to not separate chromosomes properly. Some of the most common aneugens are pesticides, tobacco smoke, perfluorinated carbons, benzene and insecticides. X-rays are also a known aneugen. Aneugens are also referred to as genotoxicants. 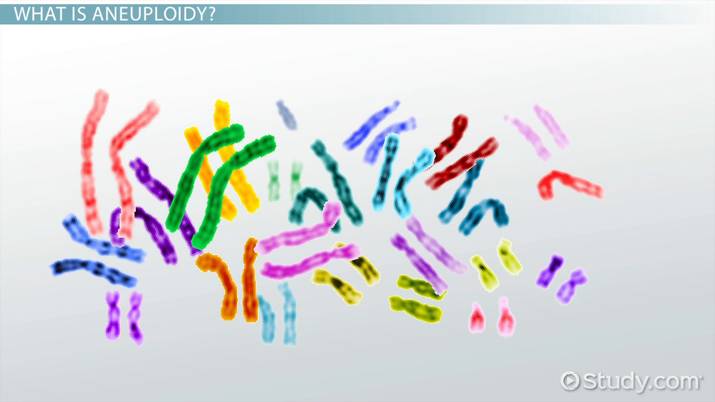 Coming up next: Gametogenesis: Definition & Concept

There are several different aneuploidy disorders of most of the different conditions of aneuploidy. As mentioned earlier, nullisomy is fatal and doesn't produce a viable baby so there are no nullisomy disorders.

Aneuploidies are genetic disorders so the diagnosis of them comes from looking at the genes of a fetus or baby. They are often diagnosed prior to birth. An amniocentesis has been the most common method for diagnosing aneuploidies. A sample of the amniotic fluid is removed from around the fetus. The amniotic fluid contains DNA from the developing fetus. The chromosomes are viewed through a process called karyotyping. This is when all of the chromosomes in the cell are paired up to view the full set of DNA. Viewing the chromosomes allows the doctor to tell if there are extra or missing chromosomes.

Karyotyping can also be done by doing chorionic villus sampling which is a technique where a sample of placental tissue is removed from a pregnant woman. This is usually done when testing is needed very early on during the pregnancy. There are newer techniques that are less invasive such as cell-free fetal DNA. Cell-free fetal DNA is easily performed by simply drawing blood from the pregnant woman. The fetal DNA is present in the maternal blood, so karyotyping can be performed on the blood.

A chromosome is a long piece of DNA and an aneuploidy is when there is an abnormal number of chromosomes present in the body cells. Meiosis is the process of creating sex cells. Aneuploidy occurs due to errors during meiosis. Aneugens are agents that can cause aneuploidies to occur. Aneuploidy conditions include:

Diagnosis of aneuploidies is done through karyotyping which is viewing the full set of chromosomes. This is done through removal of amniotic fluid called amniocentesis, chorionic villus sampling, which is the removal of placental tissue, and cell-free fetal DNA, which is getting DNA from maternal blood.

What are the four types of aneuploidy?

What are examples of aneuploidy?

Monosomy Disorders & Examples | What is Monosomy?