Copyright
Jennifer Carnevale, Sharon Linde
Learn about anger in the field of psychology. Identify the dimensions and types of anger, study examples of anger, and discover treatments for health complications and other anger-related issues. Updated: 03/08/2022

Humans are capable of an array of emotions. But, even within individual emotions there are wide spectrums of feelings and reactions. Anger is one such emotion that can trigger myriad responses. This begs the question, what is anger?

Anger is defined as a strong feeling of annoyance, irritation, hostility, and even antagonism. The anger definition encompasses this spectrum of feelings that can manifest in various, but typically negative, ways. While anger is a normal and naturally occurring feeling, there are various types of anger, along with various reasons that people feel and express anger. So, what does anger mean in terms of psychology? 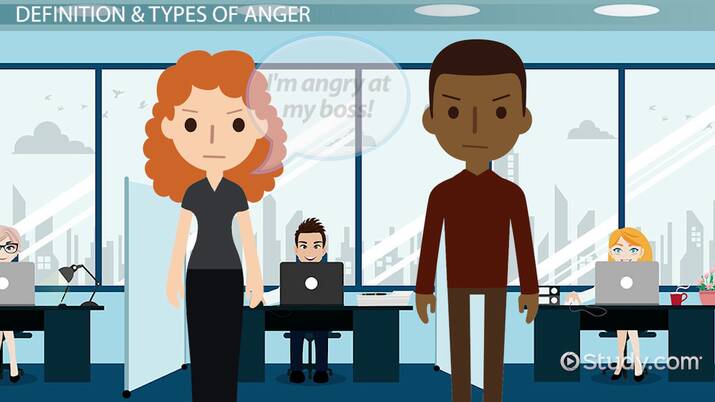 Try it now
Back
Coming up next: What is Covert Narcissism?

Dimensions in the Psychology of Anger

Along with varying dimensions, the characteristics a person will exhibit when angry can also vary from person to person and situation to situation. However, many may feel some or the following symptoms:

What are the Three Types of Anger?

Since people feel and express anger in various ways, it is important to note that there are many types of anger. Here are three of the main types:

While these types of anger are only a few of the ways in which anger can manifest, it's also important to note that anger can also be verbal and nonverbal. For some, they may be unable to speak, overtaken by their emotions, while others talk and or yell through their feelings as a way to process. No matter what, it's important to understand that every person will react differently when overcome with the feeling of anger, and may even exhibit a different response to a repeated angering situation.

Since anger can manifest in myriad ways, there are many potential examples of anger. Here are just a few to help aid comprehension:

There are various types of anger issues in the spectrum of anger, but in all cases anger can lead to health issues, such as insomnia, depression, hypertension, anxiety, and substance abuse. While anger is an emotion that all people will feel at one point or another, it's important to know that there are ways to manage anger and treat anger issues as they arise.

A great starting point is therapy. Cognitive-behavioral therapy can help a person become aware of their anger triggers and can help them calm down when an angry moment arises. There are also group programs where people come together to discuss what makes them angry and support each other to make healthy choices moving forward. Individuals can also treat anger on their own with coping mechanisms, such as meditation, exercise, and hobbies that help them release stress and find joy.

Anger is a feeling of annoyance, irritation, or hostility that can be brought about by a variety of triggers. While everyone will manifest anger in different ways based on their coping mechanisms and the situation at hand, the potential dimensions of anger remain the same:

What is the true meaning of anger?

Anger is a human emotion that can manifest in many ways. For most, anger is a feeling of annoyance, irritation, hostility, or antagonism.

What are the 3 types of anger?

What are the characteristics of anger?

Self-Esteem: Concept & Examples | What is Self-Esteem?

The Seven Steps of Decision Making

Optimistic vs Pessimistic Thinking | What are Optimists & Pessimists?

Anger: Overview and Types | What Is Anger in Psychology?
Related Study Materials

Self-Esteem: Concept & Examples | What is Self-Esteem?

The Seven Steps of Decision Making

Optimistic vs Pessimistic Thinking | What are Optimists & Pessimists?