Copyright
Emma May, Jeff Calareso
Angle-angle-side (AAS) congruence is used to prove two triangles are congruent. The proof of AAS congruency is simple, and examples are included. Updated: 12/16/2021 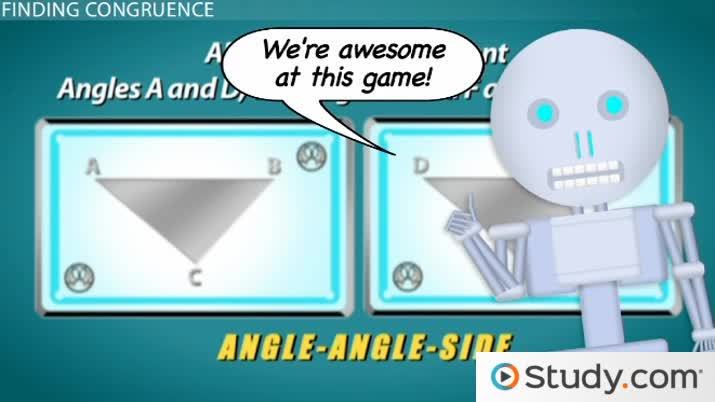 The proof of the AAS congruence theorem is simple. To start, consider two triangles ABC and DEF such that there are two equal angles and one equal side adjacent to only one of the angles.

Therefore, by the ASA congruency theorem, the triangle ABC is congruent to the triangle DEF, because A = E, C = D, and |AC| = |DE|.

There are two necessary properties for two triangles to be congruent by angle-angle-side. First, the two triangles must have two equal angles. Then, there must be a side adjacent to only one of the angles in each triangle such that the sides are equal. AAS is not used when the equal side is between the two angles. In that case, use the angle-side-angle, or ASA, theorem. If there are three equal sides, then use the side-side-side, or SSS, theorem. If there are two sides that are equal and one angle between the two sides that are equal, then use the side-angle-side, or SAS, theorem. It is important to note that if there are two equal sides and an angle adjacent to only one of those sides, known as side-side-angle or SSA, then the two triangles may not be congruent. Furthermore, if there are only two equal angles and no other information is given, it is impossible to determine whether the two triangles are congruent.

Another example uses two triangles arranged in a bow-tie manner.

It is given that AC is parallel to DE, and B is the midpoint of AE. First, notice that |AB| = |BE| because B is the midpoint of AE. Then, angle A is equal in measure to angle E because the alternate interior angles of two parallel lines are congruent. Furthermore, angle C is equal in measure to angle D for the same reason. Thus, there are two equal angles and an equal side. This satisfies the AAS theorem. Therefore, triangle ABC is congruent to triangle BDE.

For an example of how it is used when the angle measures and the side is given, consider the example from earlier. It is given that there is an angle of measure 53.1 degrees, an angle of measure 90 degrees, and a side adjacent only to the 90-degree angle of length 4. Although the triangles are positioned differently, it must be true that by AAS the two triangles are congruent, because they share two equal angles and a side of equal length.

What is the AAS Theorem?

What is the AAS congruency rule?

The AAS, or angle-angle-side, congruency rule states that if two triangles have two equal angles and a side adjacent to only one of the angles that are equal, then the two triangles are congruent.

What is the angle angle side rule?

What is AAS give two example?

Consider two triangles ABC and DEF lied side by side such that AD = BE , and angle C equals angle F, and BC is parallel to EF. Then the two triangles are congruent.

Or, consider two triangles ABC and BDE arranged in a bowtie such that AB is parallel to DE and B is the midpoint of AE. Then the two triangles are congruent.