What is Angular Velocity?

To understand the concept of angular velocity, it is important to first know what rotation is. Think of a spinning top or a windmill. These objects are rigid bodies and rotate about a fixed axis. A rigid body is one that rotates with all of it locked together, without any change in the shape of the body, and a fixed axis is an axis that does not move. In the case of the spinning top, the axis of rotation passes through the body of the top itself; for the windmill, the blades rotate around an axis that passes through the rotor. In both cases, the objects are exhibiting rotational motion. Some other examples of bodies exhibiting rotational motion are:

The velocity associated with rigid bodies as they exhibit rotation about a fixed axis is called angular velocity. Angular velocity is generally represented by the Greek letter omega ({eq}\mathbf{\omega} {/eq}).

The angular velocity and linear velocity of a body can be related to each other. If a body is rotating about a fixed axis with an angular velocity of {eq}\omega {/eq}, the linear speed {eq}v {/eq} of any point within the body at a distance {eq}r {/eq} from the axis of rotation is given by 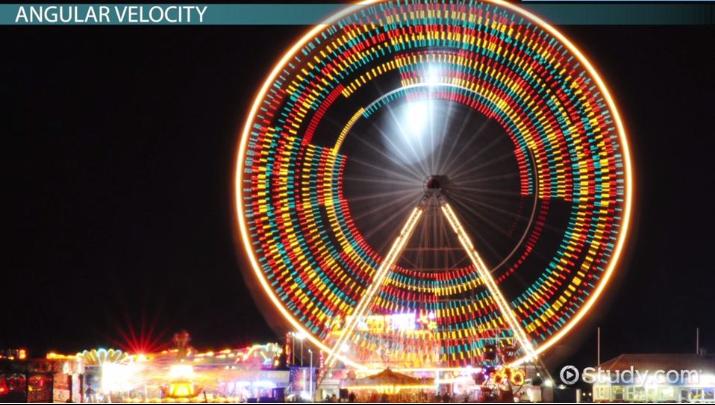 Before we look at the formula for angular velocity, let's first understand the more fundamental concepts of angular position and angular displacement. Consider the figure below.

A rigid body is rotating about the z-axis with angular velocity {eq}\omega {/eq}. Every particle of the rigid body rotates about the z-axis and traces a circle lying on a plane perpendicular to the axis of rotation (z-axis) with its center on the axis. Now, consider a rigid body particle at a distance {eq}r {/eq} from the axis. Its angular position with respect to a reference line (x-axis) is {eq}\theta {/eq}. As time passes, the particle rotates about the z-axis and after time {eq}\Delta t {/eq}, its angular position becomes {eq}\theta' {/eq}. Thus, the angular displacement of the particle, {eq}\Delta \theta =\theta '-\theta {/eq}.

Another common measure of angles is degrees ({eq}^{\circ} {/eq}). The conversion of the unit of angles from radians to degrees and from degrees to radians is pretty simple. If we go around an entire circle, the length of the arc traversed is equal to the circumference of the circle, i.e., {eq}2\pi r {/eq}. So, the number of radians in the whole circle is,

The table below shows some measures of angles in radians and degrees.

How to Find Angular Velocity

Now that we've learned the formula and units of angular velocity, let's look at a few interesting examples.

Consider a Ferris wheel at a carnival. If the Ferris wheel completes one rotation in {eq}3\:min {/eq}, what is its angular velocity in rad/s and rpm?

Thus, the angular velocity of the Ferris wheel in rad/s is,

We have, angular velocity

What should the minimum angular velocity of a race car be so that it has a speed of {eq}150\:mph {/eq} or above when racing along a circular track of radius {eq}0.3\: miles {/eq}?

How Angular Velocity is Used

To understand the relationship between torque and angular velocity, let us first understand what torque signifies. The torque or moment of force is the force involved in the rotation of an object. Torque in rotational motion is equivalent to force in translational motion. Consider a lever that rotates about a fixed point. To rotate this lever, you need to apply a force at any point along the length of the lever; this force that causes the rotational motion of the lever is called the torque. The magnitude of torque is the product of the amount of force applied and the perpendicular distance between the point of application of force and the fixed point about which the lever rotates.

As mentioned earlier, torque is similar to simple force. The analogous nature of torque and force is evident from the formulae of power in rotational and translational motions.

Now, the work done can be expressed as the product of force {eq}F {/eq} and displacement {eq}d {/eq}; further, the displacement per unit time gives the velocity {eq}v {/eq}.

We can now bring in the torque {eq}\tau {/eq} here (which is the product of force and perpendicular distance). Thus, we have

This shows how the torque and angular velocity are related, and this expression is analogous to

As the Earth rotates about its axis, the circulating air in the atmosphere gets deflected towards the right in the Northern Hemisphere and towards the left in the Southern Hemisphere. This deflection of air currents due to the rotational motion of the Earth is called the Coriolis Effect and the force associated with it is called the Coriolis Force. The magnitude of this force is given by

A pulley is a small wheel with a grooved rim on which a thread or rope can be attached. When a heavy load is fixed to one end of the rope, the load can be easily pulled up by exerting a downward force on the other (free) end of the rope attached to the pulley. More than one pulley can be appropriately arranged to form a system of pulleys, which makes moving the heavy load even easier.

Substituting the expressions for the three energies, we have

Wrapping up this lesson, let's look back at some important concepts that were discussed. Rotation can be defined as a rigid body moving about a fixed axis, wherein all the particles of the body are locked in place. The velocity associated with the rotational motion of a body is called the angular velocity. The angular velocity of a rotating body is defined as the change in its angular displacement per unit of time. Angular velocity is an important concept in mechanics, and it determines several physical quantities, such as angular acceleration, rotational kinetic energy, centrifugal force, Coriolis force, and the motion of a system of pulleys.

Here are some highlights of the lesson:

1. A ball on a string is rotating clockwise and it covers 20 radians in 5 seconds. What is its angular velocity?

2. A merry-go-round is rotating counterclockwise. It makes 10 revolutions in 23 seconds. What is its angular velocity?

3. How many revolutions does a turntable rotate through if it is moving at 32 rad/s and has been turning for 4 minutes?

How to Convert Angular Velocity to Linear Velocity

The Relationship Between Angular Momentum & Torque

Calculating the Velocity of the Center of Mass

The Parallel-Axis Theorem & the Moment of Inertia