Copyright
Morgan Brisse, Sarah Erhart
Learn about anomers. Understand the definition of anomers, how they occur, their types, and explore examples of anomers in carbohydrates and see their structures. Updated: 03/05/2022

An anomer is a specific type of epimer that occurs in certain carbohydrate (sugar) molecules. Carbohydrates are cyclical carbon chains where each carbon is bound to a hydroxyl (OH) group. This means that every carbon atom in the carbohydrate ring is a stereocenter, and we typically refer to changes in stereochemistry between carbohydrate stereoisomers by numbering the carbon atoms (C1-C5 for a six-member ring and C1-C4 for a five-member ring). This adds a third criterion when naming a carbohydrate molecule: the size of its ring (glucose has a six-member ring while fructose has a five-member ring), its existence as a monomer or a polymer (glucose is a monomer while sucrose is a dimer), and distinction from other its epimers (glucose and galactose are epimers by differing in orientation at C5). Most carbohydrate epimers will have a different name, as is the case for glucose and galactose. But anomers (which differ in orientation at C1) are instead given alpha and beta forms of the same molecule (much like the R and S designations for enantiomers) instead of being given different names.

How do Anomers Occur? 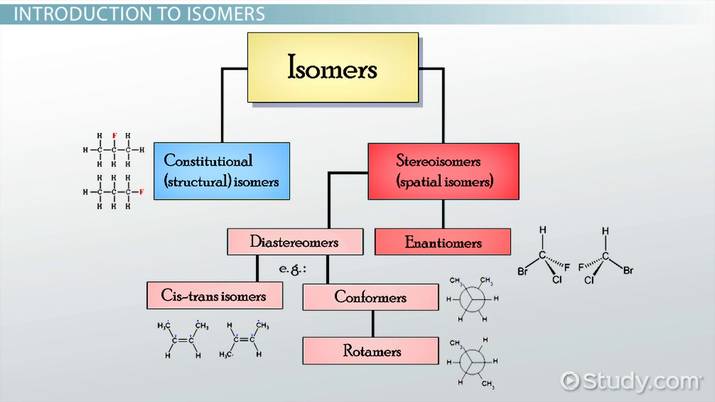 Coming up next: How to Master Multiple Choice Questions on the AP Chemistry Exam

The conversion of stereochemistry at a stereocenter usually requires catalyzation by an enzyme known as an isomerase. But reducing sugars will spontaneously convert between the cyclical carbonyl and the aldehyde/ketone molecule (and back again) in a solution containing acids and bases. This flexibility between these two forms is known as mutarotation. Another way to visualize this conversion is to consider that the anomeric carbon is described as being in a hemiacetal or a hemiketal bond with the oxygen atom in the carbon chain. The prefix 'hemi' means partial, meaning that an anomeric carbon will (as an average of the states it exists in over time) be in a bond that lies somewhere between a single and a double bond with the oxygen atom.

While anomers will regularly convert between each other, their different orientations at either end of the mutarotation are given a different designation as alpha or beta. Some examples of how a sugar molecule will have its anomers named are alpha-D-glucopyranose/ beta-D-glucopyranose and alpha-D-fructofuranose/ beta-D-fructofuranose. Note that the alpha/beta designation refers to anomers, while the D/L designation refers to the stereochemistry at the non-anomeric carbons.

While we consider anomers to be flexibly converting between each other in solution, this does not mean that each anomer is favored equally in a solution. As an example, a sample of D-glucose will eventually resolve into an equilibrium consisting of approximately 64% beta-D-glucopyranoside and 36% alpha-D-glucopyranoside. The relative amounts of each anomer will depend on the biochemistry of the sugar molecule and the environmental conditions.

Anomers are a specific kind of epimer that only differ in orientation at their anomeric carbons. Anomeric carbons are present in reducing sugars where a carbon atom can convert between a cyclical hydroxyl bond and an aldehyde or a ketone bond. Anomers will regularly convert back and forth between the cyclical carbonyl and the linear acetone/ketone forms in a solution containing acids and bases, and this flexibility is known as mutarotation. Anomers are given an alpha or beta designation depending on the orientation shown in a chair or Fischer projection.

What is an anomer?

An anomer is a specific type of epimer that occurs in carbohydrates (sugars). They only differ in 3D orientation between each other at the anomeric carbon (usually C1 in chair and Fischer projections).

What are the two types of anomers?

The two types of anomers are alpha and beta. These are determined by seeing the orientation of the anomeric carbon.

Epimers in Chemistry: Concept & Examples | What are Epimers?

Genotypic Variation Overview & Examples | What Is a Genetic Variant?