What is Anterograde Amnesia?

The most famous example of a patient with anterograde amnesia is a man known as H.M. He suffered from epilepsy and underwent a procedure that removed certain parts of the brain. One part was later confirmed to be a key structure for memory processing. He was able to learn how to perform something, like an entire maze, without consciously seeing the maze before. This is because he was unable to learn new information but was able to learn new skills, so he consciously could not remember learning the maze even though he had the skill. Anterograde amnesia can also be seen in film, like the movie "Memento," where the main protagonist, Leonard Shelby, suffers from the inability to learn new information. 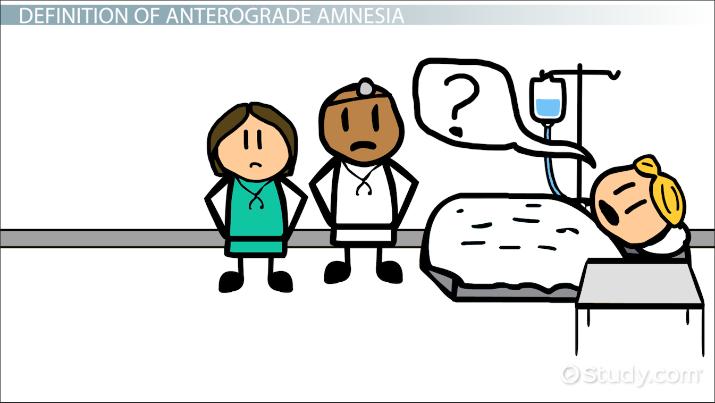 Anterograde amnesia involves the damage or degeneration of several parts of the brain pertaining to memory processing.

What Part of the Brain is Affected by Anterograde Amnesia?

Anterograde amnesia may be caused by damage to certain brain areas pertaining to the median temporal lobe, which plays a key role in short-term memory and the processing of memories. While the mechanisms that underlie how memory is processed or stored, structures within the median temporal lobe have been shown to be related to memory processing. One key structure is the hippocampus, which is a sea horse-shaped structure primarily responsible for anterograde amnesia given its key role in short-term memory. The hippocampus is thought to play a key role in the transition of short-term memories into long-term memories via several key mechanisms, and research has shown that this occurs during sleep.

Importantly, patient H.M. had lost major parts of the median temporal lobe during the operation, and this caused him to experience anterograde amnesia.

One example of retrograde amnesia is when a person is no longer able to recall the names of their loved ones, whether or not they own a house or car, the hair color of their spouse, or the dates of specific events. In contrast to this, patients with anterograde amnesia are able to recall past memories but are unable to remember newly-learned facts, such as where they parked. Like patients who have anterograde amnesia, they are still able to drive or play an instrument, since procedural memory tends to remain intact.

There are several possible causes of anterograde amnesia, and some are listed below.

Symptoms of anterograde amnesia include the inability to recall new memories, such as:

While there is no specific cure or treatment that battles anterograde amnesia, there are treatment options that help the patient cope with the condition. They include:

Vitamin B1 supplements may help slow the amnesia since this vitamin is very important in maintaining healthy memory abilities. Furthermore, technology assistance such as phone applications can be of great use, and occupational therapy techniques such as learning how to use previous memories in order to learn new ones. Memory training tactics could include several strategies or games the patient may use to organize information in a better more clear manner for easier memory storage.

Anterograde amnesia refers to the inability to form new memories, while retrograde amnesia is the inability to recall past memories. It involves damage to the median temporal lobe which has several key structures pertaining to the processing of memory, such as the hippocampus. The hippocampus is primarily responsible for the conversion of short-term to long-term memories and is greatly damaged in amnesia. Short-term memory refers to memories that last a short amount of time, such as remembering the name of someone you just met, whereas long-term memory corresponds to longer-lasting memories including facts, skills, and a person's autobiographical memory.

Memory can be divided even further into declarative memory, meaning facts that can be declared, and non-declarative memory, which pertains to skills and is also known as procedural memory. Declarative memory can either be semantic memory, corresponding to facts, or episodic memory, referring to a person's autobiographical memory including personal events and facts. It has been shown that anterograde amnesia only affects episodic memories. This is because the hippocampus is greatly linked to processes pertaining to this kind of memory.

What are the differences between anterograde and retrograde amnesia?

What can people with anterograde amnesia remember?

People with anterograde amnesia can remember older memories and skills, since their long-term memory is still in tact in addition to their procedural memory.

What are the symptoms of anterograde amnesia?

The symptoms of anterograde amnesia refer to the inability to recall recently-learned information, such as any recent life changes or the name of someone the patient just met.