Natalie Perdue, Jessica Whittemore
Explore what anthropology means and how anthropologists use the comparative method. Understand each subfield of anthropology, including cultural anthropology. Updated: 03/12/2022

The anthropology definition is described as the scientific study of humans or the study of people. The word has Greek roots, with anthropos, meaning ''human,'' and logia, meaning ''study.'' Anthropologia, or the ''study of humanity,'' was a New Latin word that appeared in the late 1500s, but was not first used in its modern scientific context until the 1800s.

Anthropology is a broad field that investigates every facet of human life, what makes humans unique as a species, and what makes groups of people or individuals different from others. Its focus ranges from the earliest ancestors of humans to the present-day. Some anthropologists even examine the potential future of humans. Anthropology is a broad area of study and it overlaps with many other academic areas, such as history, sociology, Humanities, evolutionary science, and biology. 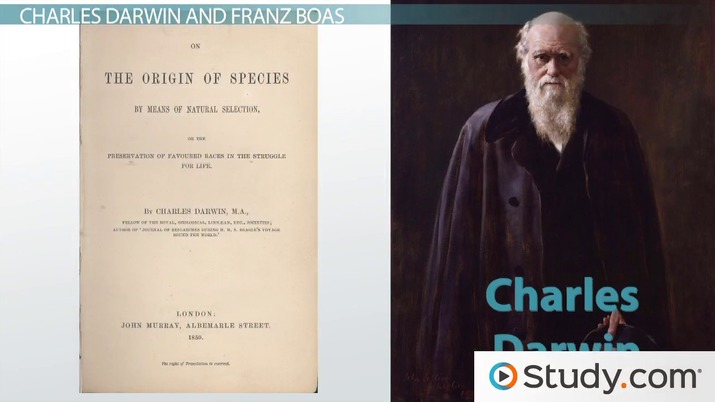 Try it now
Back
Coming up next: Recurring Themes in History: Societal Migration, Evolution, Aggression & Industrialization

What Do Anthropologists Study?

Anthropologists study a variety of areas related to human life. They study fossils and bone and teeth fragments of early hominins, the branch of the primate family referring to human species, or Homo sapiens and their earlier ancestors (e.g., Ardipithecus kadabba, Australopithecus africanus, Homo neanderthalensis). They study humans as compared to other animals—usually in the primate family. They also study human cultures, structures, and communication. In short, anthropologists study everything related to human existence and life as it relates to the past, present, and future of humans.

Charles Darwin is one of the most recognized names in science. He was a naturalist and is best known for discovering and writing about the Theory of Evolution. He wrote On the Origin of Species, his first major work, which introduced his concept of evolution through natural selection. This work was followed by The Descent of Man, which provided a detailed discussion of how humans were affected by evolution.

Although Darwin was a naturalist, he is also considered an anthropologist. He used his theories of natural and sexual selection and evolution to describe how humans became humans. His work began the anthropological discussion of the biological origin of the human species, and how humans are related to, yet are different from, other life on Earth. Darwin's work was also used (or, rather, misused) to explain cultural differences as well. For instance, his Theory of Evolution was used to support the idea that Africans were less evolved than whites, which, in turn, was used to justify slavery.

Franz Boas, often referred to as the "Father of American Anthropology," founded the subfield of cultural anthropology. In contrast to Darwin, he presented the idea that behavior and social structure were not dictated by biological evolution. His work focused predominantly on race and culture, and it centered on the concept that culture, rather than race, affected behavior. He argued that Africans were not more primitive than Europeans because they were less developed, but because their culture was more primitive. His work was met with harsh criticism by supporters of slavery and segregation.

As it is such a diverse area of study, anthropology is generally broken down into four major subfields:

Cultural anthropology is the study of various cultures around the world. Cultural anthropologists compare different cultures and examine the differing perspectives of people living within the same culture. Their research helps to form a stronger understanding of humans on a cultural level.

Biological anthropology examines humans in relation to their biology. Biological anthropologists might study the process of human evolution, human adaptation to various environments around the world, or diseases and other causes of death in humans. They examine fossils, other animals such as primates, and living or deceased humans with the overarching goal of better understanding the biological nature of human beings.

Archaeological anthropologists study past human cultures. They search sites of prior civilizations to look for artifacts and human remnants that will provide clues as to how ancient humans lived. They research the food, tools, and societal structures of these peoples. Archaeological study spans eons, from early human ancestors living millions of years ago through modern human experience. Archeologists seek to understand the ways people have changed or remained constant over time and throughout the world.

Linguistic anthropology is the study of human communication. These anthropologists might research the similarities and differences between different languages, how language affects culture or vice versa, and how language is used in life. Anthropologists working in this subfield examine humanity from the perspective of language.

Anthropology is the term used for the study of humans. Anthropologists study Homo sapiens, other hominins (humans and their ancestors), and other primates, both past and present. Charles Darwin, the author of On the Origin of Species, was a naturalist but is often called an anthropologist. He presented the concept of evolution through natural selection, which started the scientific discussion of how humans came to exist. Fran Boas, or the ''Father of American Anthropology,'' created a new facet of anthropology: cultural anthropology. He focused on race and culture, and he introduced the idea that culture, rather than race, was the primary contributor to behavior.

What is the main purpose of anthropology?

The main purpose of anthropology is to better understand every facet of humans. Anthropologists work to understand human evolution, social structure, culture, communication, adaptation, and emotions.

What is an example of anthropology?

Anthropology is a diverse branch of study. Examples could include studying differences in educational systems across cultures, researching the difference in diets between people living in China and people in the United States, or examining the site of an ancient civilization to understand their technology.

What is the simple definition of anthropology?

Put simply, anthropology is the study of people. Anthropologists study people from every aspect; from ancient human ancestors to the potential future of humankind.

What are the 4 major fields of anthropology?

The four major fields of anthropology are cultural anthropology, biological anthropology, archaeology, and linguistic anthropology. These anthropologists study culture across time and space, human biology (past and present), ancient humans in relation to modern people, and communication and language, respectively.

Holism Theory & Overview | What is Holism in Anthropology?

Holism Theory & Overview | What is Holism in Anthropology?