Copyright
Shawn Custer, Margaret Moran
Learn about Anubis the Egyptian god of death, and Bastet the cat goddess. Explore the mythology, physical forms, and hieroglyphs of the Egyptian gods. Updated: 02/14/2022

The ancient Egyptians had many gods and goddesses, and their relationships with these deities impacted nearly every aspect of their daily lives. There were gods and goddesses associated with natural forces and daily activities, and the Egyptians made offerings and performed rituals in order to maintain the divine order, known as Ma'at.

Anubis and Bastet were two Egyptian gods said to be the children of Ra, the king of the gods. Anubis played an important role in death and mummification. He was believed to be the protector of souls. He was also responsible for weighing the souls of the dead, sitting in judgment of them in the Hall of the Two Truths.

Bastet was the Egyptian goddess of protection and good fortune, among many other things. She was closely associated with cats, as they kill rodents and vermin that might destroy crops and spread illness and disease. 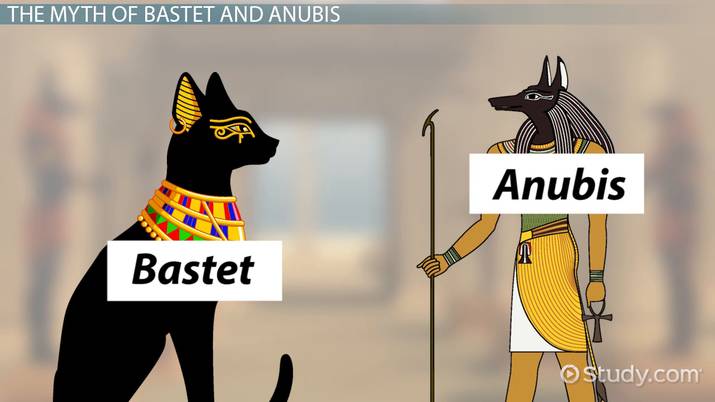 Coming up next: The Eye of Horus: Definition, Symbol & Mathematical Meaning

Anubis : The God of Mummification

Anubis is the Egyptian deity associated with death, cemeteries, and mummification. Caring for the dead was an important aspect of Egyptian culture, and Anubis, it was believed, helped protect souls as they traveled to their afterlife. Some people mistakenly associate Anubis with the cat or believe that Anubis was a cat, but this is incorrect. Instead, Anubis is associated with the jackal.

The afterlife was as important to the ancient Egyptians as life, and so they took great care in preparing the dead for the afterlife. As part of these preparations, the Egyptians would call on Anubis as the god of mummification, praying for him to bless the dead in elaborate ceremonies and mummification rituals.

Anubis also had a role to play when the souls of the dead moved on. He was said to stand in the Hall of Two Truths and weigh the heart of the deceased as they sought judgment. The heart was said to be weighed against Ma'at's feather of truth. If the heart weighed more than the feather, Ammit, a hybrid deity, would come and eat the heart and the soul would be destroyed. If the heart weighed the same as the feather, the soul would be admitted into the Afterlife.

Anubis was said to have a human body but the head of a jackal. He was all black, a representation of the fertile black soils of the Nile region of Egypt. The Egyptians believed that black was a symbol of rebirth and good fortune, important in life as well as the afterlife.

Hieroglyphics are a system of writing that relies on picture representations. These are often simple line drawings used to represent people and things, but they can also be symbols that represent specific symbols. Because Egyptians used only consonants, they often included a simple drawing to help identify the written word. Anubis' hieroglyph uses symbols for the letters I, N, and P followed by a drawing of a jackal on a pedestal. The letters I, N, and P are thought to spell out either the word "inpu," which meant "royal child" or "inp," which translates to "to decay." Anubis has been known by several names, including Imy-ut ("He Who is in the Place of Embalming") and nub-tA-djser ("lord of the sacred land").

Bastet was the Egyptian goddess of good health, pleasure, and protection. She is closely associated with cats, which were revered by the ancient Egyptians almost as demi-gods because they protected the crops and helped to prevent disease by killing rodents.

Bastet was believed to be a great protector. During the day, she would ride through the sky with her father, the Sun God, Ra. During the night, she would transform into a cat to protect him from the serpent Apep, his mortal enemy. Bastet was also thought to be the Goddess of the Moon, and was often called the Eye of Ra.

Early depictions of Bastet show her as a lioness, but she later became shown as a cat. Bastet's human form was that of a woman with a cat's head.

Bastet has been known by several names. Bast, an earlier version of her name, was possibly a reference to the goddess Isis, thought to be her mother. She later came to be known as Bastet. She is also sometimes called the eye of Ra or the eye of Atum (the sun). Part of Bastet's name, "bas" translates to an ointment jar, so Bastet also translates to "she of the ointment jar." As such, part of her hieroglyph is an image of an ointment jar. That is followed by a feminine symbol and a seated goddess.

Ancient Egyptians worshiped hundreds of gods and goddess that represented all aspects of the natural world and daily life. Two of those gods, Anubis and Bastet, were the children of the creator god, Ra. Anubis was the god of death and mummification and played an important role in protecting the soul after death as well as judging the worthiness of the soul to enter into the Afterlife by weighing the hearts of the dead. He is often shown as having a human form with the head of a jackal.

Bastet was the goddess of protection, pleasure, and good health, among other things. She is closely associated with cats, animals that were revered for their protection of crops and disease because they hunted and killed vermin. Bastet was often depicted as a lioness, a cat or a woman with a cat's head.

Who did Bastet marry?

Bastet is said to have married Ptah. He was the god of craftsmanship and architecture. Bastet is also said to be the mother of Nefertum.

Who did Anubis marry?

Anubis married Anput. Like Anubis, she was also depicted as having the body of a human with the head of a jackal.

What does seeing Anubis mean?

Anubis was the god of death, cemeteries, and mummification. He was said to be a protector of souls as they made the transition from life through death to the Afterlife.

Is Anubis a cat?

Anubis is not a cat. Anubis is associated with the jackal and is usually depicted as a man with a jackal's head.