Daniel Cole, Aida Vega Felgueroso
Learn about Aristotle and his idea of eudaimonia, or a life well-lived and with happiness. Discover how Aristotle's eudaimonia has been interpreted since his time. Updated: 03/02/2022

Aristotle was an ancient Greek philosopher who lived from 384 to 322 BCE. He was the student of Plato and the teacher of Alexander the Great. He is also one of the most famous philosophers in history and made major contributions to virtually every field of study that existed during his era, including logic, metaphysics, biology, rhetoric, and political theory. Among his most enduring contributions is his ethical theory, and Nicomachean Ethics is his most famous work in that field. In it, Aristotle presents his theory of eudaimonia, or '"happiness."' 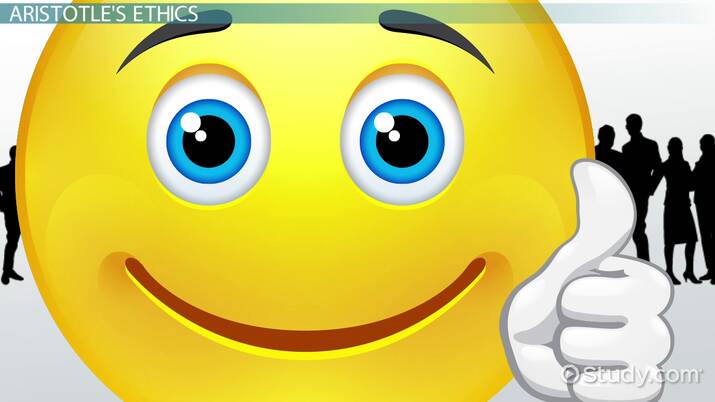 Try it now
Back
Coming up next:

What is eudaimonia? Eudaimonia's definition is often simply rendered as '"happiness"' or '"the good life."' Note that the focus is on a whole life rather than any particular moment within it. Eudaimonia for Aristotle is not simply a pleasant life or even a life of fame and fortune. So what does eudaimonia mean for Aristotle? Aristotle's theory of eudaimonia stems from his understanding of what makes a human being. Aristotle's '"happiness"' means a life of reason because humans are rational beings.

Aristotle's argument proceeds by noting that we call something good when it is good at performing the function peculiar to that thing. Thus, a good knife is a knife that is good at cutting, while a good hammer is good at driving nails into wood. A good knife need not be good at hammering nails, while a good hammer need not be good at cutting. Thus, the question of what makes a good human life comes down to what function is peculiar to humans. He then argues that the function peculiar to humans is using our reason. Thus, a good human life, eudaimonia, will be achieved through the use of one's reason.

Aristotle offers two versions of the good life since there are two uses of reason, a practical and a theoretical. The theoretical life is spent in contemplation of things that cannot change, like studying the motion of the stars. Aristotle contends that a life spent in such contemplation is the happiest and most divine.

The practical life of reason is the one that is often discussed in ethics, and Aristotle devotes much of Nicomachean Ethics discussing it. The most distinguishing feature of a good practical life is that it involves cultivating multiple virtues. Virtues are acquired character traits that aid in human flourishing. Moreover, they reflect a mean, a middle point, between excessive and deficient feelings, habits, and inclinations. Aristotle refers to this middle point as the golden mean. It is not a strict mathematical average, and it requires wisdom to know where it lies.

For example, courage is a virtue that helps a person lead a good life. It is also a middle point in terms of fear, where excessive fear is cowardice, and deficient fear is brashness. Both cowardice and brashness lead to a less rational, less full life. However, Aristotle remarks that one extreme is often preferable to the other, and consequently, it may be helpful to risk the less severe evil. In keeping with the courage example, cowardice is worse than being brash, and consequently, the golden mean will be closer to brashness. Further, it will be more acceptable to err on the side of being brash.

According to Aristotle, we come to learn virtues by imitating people of practical wisdom. People with practical wisdom have cultivated their virtues, and they know how to express them in the right way, at the right time, with regard to the right objects, etc. Practical wisdom involves excellence at deliberation. It is the mark of someone who has developed their rational capacity for things that can change, which is to say, practical human life.

So what is happiness according to Aristotle? Aristotle's definition of happiness is a rational life, and for those living a practical life, that means a life of cultivated virtues. Aristotle defined eudaimonia by pointing to the rational function of human beings and claiming that a good human life meant being good at using one's reason. One can develop virtues by using one's reason by finding the golden mean between extremes.

Good examples of eudaimonia involve clear expressions of virtues. Aristotelian virtues do not focus on renouncing or obtaining pleasure. In fact, they are liable to lead to a moderate amount of pleasure (at least in the usual sense) but a high degree of fulfillment. Note that when thinking of people who exemplify virtues, the point is not that the person had a pleasant life, but that they lived an excellent human life.

One important virtue is courage, which is the golden mean between the excess of cowardice and the deficiency of brashness when it comes to fear. Martin Luther King Jr. would be a great exemplar of courage. He did not seek out physical conflict, but he chose to stand up for his ideals in the face of oppression and physical threats. Thus, the virtue of courage allowed him to accomplish great deeds and influence the civil rights laws of the United States of America.

Another important virtue is moderation, which finds the golden mean regarding one's appetites. Professional athletes are good exemplars of moderation. If they have an excess appetite, they will put on more bodyweight than is optimal for their sport. Meanwhile, if their appetite is deficient, they won't eat enough and consequently will not build enough muscle or have enough energy to compete. At times, moderately eating may be unpleasant, but the minor pains that accompany moderation pale in comparison to the fulfillment of performing at a high level in a sport.

Aristotle was an ancient Greek philosopher who developed his notion of eudaimonia in his most important work on ethics, Nicomachean Ethics. Eudaimonia is often translated as happiness, although it does not associate with pleasure as the English word does. For Aristotle, a happy life is one lived according to reason, either by spending a life in contemplation of things that do not change (like mathematics or astronomy) or living a practical life of virtue. Aristotle arrives at his conclusion by noting that human beings are distinguished from other animals by their capacity to use their reason. Thus, the purpose of human beings is to live a happy, rational life. Generally, the focus in Aristotle's ethics is on the practical life of virtue. A virtue is an acquired character trait that finds the golden mean or golden middle way between two extremes. Virtues are important because they aid in living a flourishing life, while the extremes of excess and deficiency are harmful. For example, the virtue of courage is the mean between cowardice and brashness, which are both harmful to the person. The virtuous person, then, is the one who expresses their virtue by practicing the good. Practicing the good requires developing practical wisdom in order to know how to express one's virtues in appropriate contexts.

What is an example of eudaimonia?

One possible example of eudaimonia would be Benjamin Franklin's life. He espoused cultivating virtues and practiced scientific inquiry, thus demonstrating that he chose to live a rational life.

What is the difference between happiness and eudaimonia?

The difference between happiness and eudaimonia is a matter of translation. Often, the term happiness is used to translate eudaimonia. However, happiness is often associated with pleasantness or contentment in everyday discourse, which is different from eudaimonia. Eudaimonia is about living well, which emphasizes living rationally rather than pleasantly.

What is the meaning of eudaimonia?

Eudaimonia is often translated as happiness. It could also be translated as a good life. For Aristotle, a good life will be one lived in accordance with reason, which entails cultivating one's virtues.

What is the Millennial Generation? | Characteristics & Traits

Intuitionism Strengths & Weaknesses | What is Intuition?

What is the Millennial Generation? | Characteristics & Traits

Intuitionism Strengths & Weaknesses | What is Intuition?