Tish Mancini, Nissa Garcia
Learn to define Arrhenius Base. Understand the theory behind the behavior of bases, characteristics and limitations of Arrhenius bases, and see examples. Updated: 02/16/2022

Since the time of the ancient Greeks, humans have attempted to classify substances, often according to their taste: sweet, sour, salty and bitter. The Romans refined this concept, calling sour-tasting substances like vinegar and lemon juice "acere," from which the modern word acid is derived. Defining a base was more elusive, but most societies understood the practical application of making a base, soap, from the reaction of ash and fat. The term synonymous with base, alkali, is an Arabic word describing the process.

Science continued to progress, adding to the understanding of acid-base chemistry with the discovery of litmus paper, and centuries later, neutralization reactions. The term "base" entered into use when describing substances that reacted with acids to produce salts. In 1884, Svante Arrhenius, a Swedish chemist and physicist published a paper on electrolytic solutions, discussing the hydrogen theory of acids. Among his conclusions were simple definitions of acids and bases. He stated that acids increased the concentration of hydrogen ions in aqueous (water-based) solutions, while bases increased hydroxide ion concentration. Decades later, the work was awarded a Nobel Prize, although it did not garner acclaim at the time it was published.

Modern chemistry recognizes three acid-base theories: Arrhenius, Bronsted-Lowry, and Lewis. Of the three, Arrhenius' theory is perhaps the easiest to understand, however it is the most limited definition, while the Lewis theory has the broadest definition. 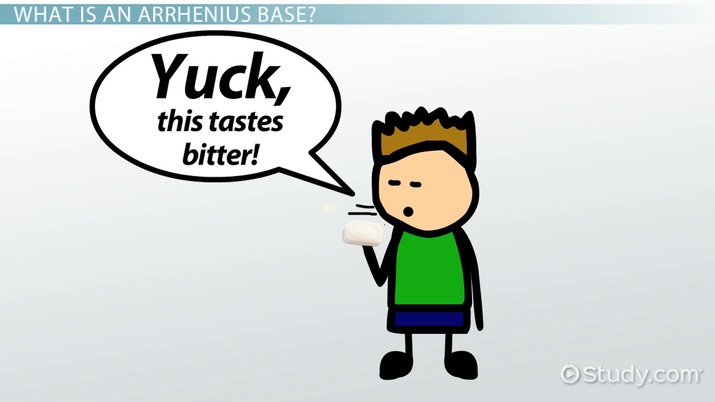 All Arrhenius bases will have the same basic pattern to its compound formula- a cation of various charge, and one or more hydroxides (OH^-) to balance the charge of the metal. The charge of hydroxide is 1^-. The formula of the ionic compound is expressed as a ratio. Metal cations located in Group 1 on the periodic table combine with the hydroxide ion in a 1:1 ratio, producing one hydroxide ion for each metal ion that dissociates in solution. All Group 1 metal hydroxides are soluble in water, and by definition would produce an Arrhenius base in solution.

Metal cations from Group 2 combine with the hydroxide ion dissociate in a 1:2 ratio, due to the metal ion's charge of 2+. Group 2 metal hydroxides vary in solubility, with some ions completely dissociating, and other ions dissociating to such a small degree that they are considered insoluble.

How to identify an Arrhenius Base

An Arrhenius base can be identified by its physical and chemical properties. It will:

The pH scale ranges from 0-14 and is calculated from the negative logarithm of the hydrogen (or hydronium, H_3O^+) ion concentration. Above pH 7, the concentration of hydroxide ions is greater than hydronium ions, and the substance is basic. Note that chemicals with pH values at the either end of the scale are highly corrosive.

When an Arrhenius acid reacts with an Arrhenius base, the products are a salt and water. Consider this typical neutralization reaction:

When testing for a base, the observer will note that red litmus paper will turn blue upon exposure to a base; blue paper will not change color in the presence of a base.

Limitations of the Arrhenius Base Theory

Although the Arrhenius base definition is useful and straightforward, chemistry students should be aware of its limitations. The definition only applies to water-based solutions. Compounds containing hydroxide, such as stannous hydroxide, Sn(OH)_4, that are not soluble in water but are soluble in other solvents would not be classified as Arrhenius bases.

The basic salts, sodium carbonate (Na_2CO_3) and sodium bicarbonate (NaHCO_3) are not considered Arrhenius bases because they do not produce hydroxide ions in solution, although they have a pH above 7.

The common base ammonia (NH_3) is not considered an Arrhenius base because it does not contain hydroxide in its formula, and does not directly produce hydroxide ions but reacts with water to increase the concentration of hydroxide ions in solution, as outlined below:

Finally, the hydroxyl group in certain organic compounds such as alcohols, do not dissociate to produce OH^- in solution. Therefore, ethanol (CH_3CH_2OH) is not an Arrhenius base. As a covalent compound, the molecule would not dissociate in solution.

The Arrhenius Base definition is easy to understand for beginning chemists. Simply put, an Arrhenius base is a compound that dissociates in water to produce hydroxide (OH^-) ions. It can be easily identified by the presence of a metal cation and hydroxide in its formula. NaOH, LiOH, Ba(OH_2), and Sr(OH_2) are examples. Arrhenius bases have a number of distinguishing properties, such as a pH higher than 7, the ability to neutralize acids, and the ability to turn red litmus paper blue. However, there are limitations to the Arrhenius base definition: it does not account for bases that do not contain hydroxide in the formula, such as ammonia, or the salt sodium carbonate. It can be argued that compounds containing hydroxide that are not soluble in water are not Arrhenius bases. The Arrhenius base definition does not apply to the hydroxyl groups found in certain organic compounds. The Bronsted-Lowry and Lewis theories have broader definitions that apply to many more basic compounds.

How do you identify an Arrhenius base?

Arrhenius bases can be identified by its pH of 7 or higher, and its ability to react to neutralize an acid by producing a salt and water.

What is a Arrhenius base example?

What is a base according to Arrhenius?

What does Arrhenius theory not explain?

The Arrhenius theory does not allow for bases such as ammonia (NH3) and sodium bicarbonate (Na2CO3), that do not produce hydroxide ions in solution.

What is Salt Hydrolysis? - Definition & Examples

Lewis Acid & Base Examples | What is a Lewis Acid?

Into the Wild: Chapter 13 Summary

On the Pulse of Morning by Maya Angelou | Summary & Analysis