What is Art Deco Architecture?

Styles of art develop over time, often overlapping and contradicting each other in their application and appeal. The history of Art Deco includes its growth as a notable style for geometric, streamlined designs that blended form with function rather than the more natural, curving look of art nouveau that had preceded it. Inspired by cultures from around the world, as well as the developing machine age, Art Deco began in Europe but took off in the United States as Americans craved the growth of skyscrapers in cities and the sophistication of art without the homemade appearance of the recent arts and crafts era. Art Deco architecture made appearances in major undertakings like the Chrysler Building in New York City, but also in movie theaters of the age, reaching people in all areas of life. 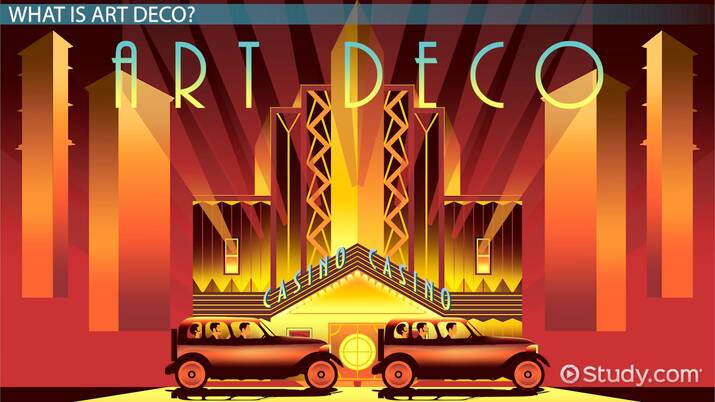 As the world emerged from World War I, people looked to the next decade with an eye toward celebration and ushered in a period known as the Roaring Twenties. Unlike previous decades, which featured homier, more familiar art, the modern era seemed to call for an elevation in its decorative pieces.

In the 1920s, Art Deco style took off in Europe with a sleek elegance that quickly spread to the United States. There, it became especially popular in the 1930s as an architectural style due to extensive urban development.

Art Deco was a modernist style and depicted a new perspective on reality influenced by earlier design styles. These styles include:

Art Deco history officially begins when the movement earned its name during the 1925 Exposition Internationale des Arts Decoratifs et Industriels Modernes, a world's fair held in Paris. There, the French government encouraged people to enjoy this avant-garde vision of modern society. They were putting the past, filled with the darkness and destruction of war, behind them. Pavilions lined the grounds, designed with intricate paintings, friezes, glasswork, and more that referenced ancient designs through updated techniques and media. It was a thorough representation of 1920s Art Deco.

In 1922, the architectural world saw one of its earliest examples of Art Deco design before the movement even had a name. Robert R. McCormick, the owner of the Chicago Tribune, opened a competition among architects to design the new building for the newspaper - "the most beautiful office building in the world". Though a gothic design (older style) won the contest, it was second place Eliel Saarinen who drew the most attention. His building featured a sleek look with an eye toward verticality. Though his buildings were never built, his designs influenced a number of other architects of the time.

Among the many historic Art Deco designs that rose into the sky, the Chrysler Building and Radio City Music Hall in New York City remain among the most recognizable. Their sleek design and modern materials, like glass and steel, represent the growth of the architectural design movement in the United States and an important influence on 1930s architectural style. Not only skyscrapers and theaters, but people began to seek Art Deco style in their personal belongings as well, including furniture, jewelry, fashion, and cars. Even home appliances like vacuum cleaners saw their designs modernized.

But as the stock market crashed in the late 1920s, the extravagance represented needed to be simplified. Not only could fewer people pay for the custom work and materials, but their priorities had also changed. Instead, chrome and curves maintained the modern look of Art Deco's visual appeal, while architects and designers raced to demonstrate scale that could be generated through streamlined design over intricacy of detail. Though some of these elements continued in certain consumer-focused industries, the impact of World War II in the 1940s signified an end to the movement as architecture and style became more industrial in appearance and utility.

The post-World War I era saw a blend of recovery in Europe and extravagance as people sought to put the destruction behind them. Art Deco characteristics included streamlined designs and a combination of new materials and ancient inspiration to usher in the modern era.

Art Deco architects took advantage of the development of new materials that allowed for further advances in structural engineering. They could build taller, more intricate designs and competed to see who could best utilize the modern techniques that arose with the introduction of:

The advances in industrialization from the war created infrastructure to further mass-produce materials in the following years. Experience helped engineers design stronger materials, which could withstand the increased forces faced by structures that are more exposed to wind and weather.

Other industries also found ways to incorporate these materials by transforming cars, fashion, jewelry, household items and appliances, and more. Designers and high-end shoppers also raced to update their offices and homes to be the most modern.

At the same time, Art Deco style wasn't entirely streamlined as art and architecture were accented by the geometric and intricate designs of ancient cultures, such as:

The inclusion of angles in zigzags and chevrons caught the eye by breaking up structural shapes and creating new ones. Their repeated patterns, along with other repeated motifs that included stylized flowers, objects, and people, brought dynamism to the solid colors and homier patterns that had preceded them.

Among the many Art Deco designers, a few stand out for their popularity and longevity.

Rene Lalique (1860-1945, France) is often considered the "Father of Art Deco", with a career that spanned jewelry design and glassmaking. By the time he made a name for himself and the modern movement at the International Exposition of Modern Industrial and Decorative Arts in 1925, Lalique was already known for a glass technique that blended clear and frosted glass.

Paul Follot (1877-1941, France) was raised by a wallpaper man and grew to design fabrics and jewelry for a top fashion house in Paris. In 1910, he set out on his own and by 1923 was in charge of Pomone, a decorative art workshop for Le Bon Marche department store. There he became known for affordable, high-quality furniture design with his signature patterns.

Paul Manship (1885-1966, USA) is the preeminent sculptor from the Art Deco period. Heavily influenced by classical periods in Rome and Greece through his studies and travels, he returned to the United States ready to build his career. Most notably, he designed the Prometheus sculpture that stands prominently in Rockefeller Plaza and the gates for both the Bronx and Central Park Zoos.

Art Deco Architecture and Its Features

Since it's completion in 1929, the Detroit skyscraper is often referred to as "The Cathedral of Finance" and has been designated a national historic landmark. Representing sleek Art Deco style alongside the incorporation of Native American and Aztec color and design influences, the Guardian Building encompasses a full city block. Though its completion coincided with the year of the stock market crash, a group of investors in Detroit raised the capital to preserve the noteworthy addition to their skyline.

The Chrysler Buildings remains one of the most recognizable buildings in the world and an essential part of the New York City skyline. Construction was completed in 1930 and it held the title of tallest building (1,046 feet) until the Empire State Building rose a year later. The architect, William Van Alen, was eager to earn the recognition, so he had the building's identifiable spire assembled inside the structure and hoisted up through the center of the glass so that he could surpass the other contenders at the time.

In addition to the spire, the original design was intended to include a dome that resembled a jewel. Van Alen instead designed a crown with layers of triangular windows that shine brightly.

Industrialist John D. Rockefeller initiated the design for New York's Rockefeller Center in 1928, and by 1933, the site had come to represent the community as Rockefeller took up the tradition started by a group of poor workers to decorate a 20-ft fir tree. Over the next 10 years, various elements of the plaza came together- Radio City Music Hall, The Rainbow Room restaurant, the skating rink- before a celebration marked the official completion in 1939.

The vibrant color and design of Radio City Music Hall have made the space one of the most popular theater destinations in the city, especially to see the Rockettes during the Christmas season.

Between the two World Wars, people around the world were eager to celebrate life and enjoy the resources available to them. They forged ahead with modernity, creating Art Deco as a movement that encapsulated the richness and strength of new materials and sleek blends of antiquity and modernity in design. It rejected many of the organic, curved forms of Art Nouveau for the new look of the more angular Cubism.

Unlike previous styles that incorporated natural forms and designs, Art Deco sought to represent the modern age with:

Paintings, sculptures, furniture, jewelry, fashion, and cars were all treated to updated styling, while structurally, architects raced to show how big, tall, and extravagant architecture could go. Their competition led to skyscrapers rising throughout big cities. Of note are the Chicago Tribune Building (considered the first Art Deco building in the United States), Chrysler Building, Rockefeller Center with Radio City Music Hall, and the Guardian Building in Detroit.

Why did Art Deco die out?

Art Deco died out as the extravagance of the Roaring Twenties devolved into the desperation of the Great Depression in the 1930s. With fewer resources to support larger than life architectural projects, and fewer people excited about modernizing when they could barely eat, styles changed. By the time World War II broke out in the 1940s, a more industrialized and utilitarian look had come into fashion.

What are the characteristics of Art Deco architecture?

What buildings are examples of Art Deco architecture?

Art Deco began in France in the early 20th Century, but earned its name and prominence in the 1920s. The Chicago Tribune Building is known as the first art deco skyscraper in the U.S. and the movement became cohesively art deco as a result of the designs at the 1925 Exposition Internationale des Art Decoratifs et Industriels Modernes in Paris.